Stars within his reach

Q and A with Wayzata's Mario Lucia

Despite his tall, lanky build that brings to mind an ostrich on ice, Wayzata’s Mario Lucia most definitely doesn’t bury his head in the sand when he catches grief from an opposing player or fan.

He usually lets his skills do the talking.

Just 12 games into his varsity career with the Trojans, Lucia has nine goals and eight assists for 17 points. His goal and point totals rank second on Wayzata, a team which has ridden his output to a surprising 9-2-1 start that has included victories over traditional powers Edina, Centennial and Duluth East.

The sophomore standout certainly gets his share of barbs from the opposition, though. Not just because he’s a young offensive wizard, using his 6-foot-1 body and his terrific hands to make it nearly impossible to separate him from the puck. But perhaps more so because of his bloodlines, which include older brother and current University of Minnesota senior Tony Lucia and his father, Gophers’ coach Don Lucia.

The younger Lucia is used to the attention and in conversation seems comfortable with his role as a target. As he continues to grow as a hockey player, the verbal sticks and stones will only increase in frequency and volume. Because make no mistake, Lucia will continue to improve on an already impressive skill-set.

“He knows how to use (his long reach) and he has great instincts,” Wayzata coach Carl Davis said of his top sophomore.

“We knew Mario was a great player and we’re really, really pleased with how he and Tony (Cameranesi) along with Tyler (Klein) have taken on a strong chemistry,” Davis said of his top-scoring line, which has combined for 22 goals and 24 assists.

Cameranesi and Lucia have played on lines together since their Pee Wee days and have great chemistry. Klein has only joined the two friends in the past few weeks, but he’s already getting into the flow.

“We’ve clicked since the beginning of the season and we have T.K., who moved up onto our line halfway through and we’re starting to get used to him,” Lucia said. “He’s always there and battling for those rebounds.”

After the team’s most recent victory at Moorhead, in which Cameranesi and Lucia each had a goal and an assist, the Breakdown talked to Lucia about his sophomore season and the benefits and pitfalls of having a famous hockey father.

Lucia: In the off-season, since my dad (Don Lucia) is the coach of the Gophers, I always go work out with the team and skate with them, including my brother (Minnesota senior forward Tony Lucia).

Breakdown: What’s that like getting that exposure to those DI players? How do they treat you? Do they give you a hard time?

Lucia: They’re all good guys and it’s a lot of fun to be around the best players in college. They give me a hard time here and there, but they’re usually nice.

Breakdown: What’s it like to have your father at the games? Is it strange to have him watching and have your teammates and the other teams noticing his presence?

Lucia: It puts more pressure on me because I always want to try to do well, because if I’m good enough, heck, I would like to play for the Gophers, too. Also, since my Dad is the coach, you always have to play well or you’re going to hear it.

Breakdown: Do you ever get harassed by opposing players or fans because of that connection?

Lucia: Yeah, sometimes, but I usually just ignore it. Just beat them on the scoreboard.

Breakdown: Give me a short scouting report on yourself as a player. What are your strengths on the ice?

Lucia: I’ve got a big, long reach. I see the ice well and I have good hands. I can get my shot off pretty quick and that helps.

Lucia: Winning the state championship (with the Wayzata Bantam A team) was fun.

Breakdown: What was that like for you after winning it all, knowing that the team was going to split up and head to different schools, for example, with Grant Besse attending Benilde-St. Margaret’s?

Lucia: We already knew those guys were leaving because they already (attended) the private schools, so it wasn’t that big of a deal. But it’s tough to see those good guys go.

Breakdown: Are you surprised about the impact that group has made right away in high school hockey?

Lucia: Yes and no. (We) are making a big impact right away, though.

Lucia: I feel like the games are more intense than Bantams and Pee Wees, so you always have to come to the rink prepared.

Breakdown: Was that intensity by all players on the ice the biggest adjustment to moving up from the Bantam level?

Lucia: It was both speed and intensity. It’s not that big a jump, because I played in Model Camp and I was used to it. So that helped.

Breakdown: Your team plays in arguably the toughest section in the state, along with Minnetonka, Eden Prairie and Benilde-St. Margaret’s – three teams ranked in the top-15 in the state along with yourselves. What do you need to do to get out of Section 6AA and to the state tournament?

Lucia: We need to play our best and get a few bounces here and there. Goaltending has to be good, and if we bury our chances, that always helps. 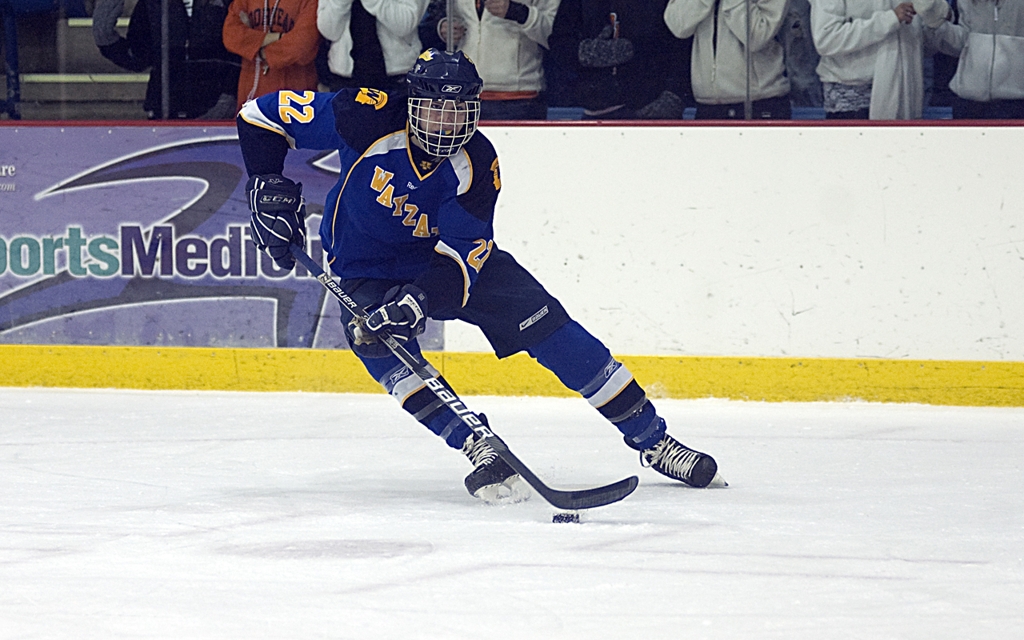