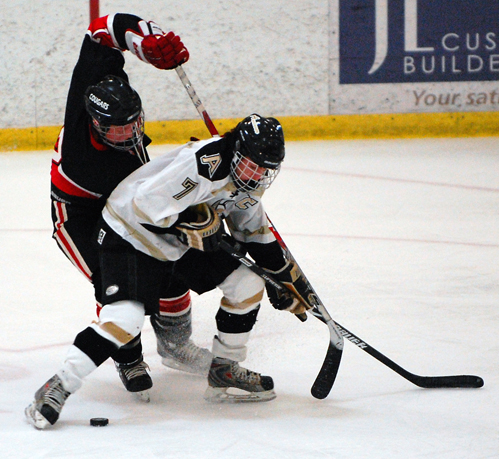 Snazzy Calgary Flames-style capital Cs are stitched on the front of Centennial’s uniforms.

The way this season is going, the more appropriate logo would be an oversized question mark.

From one game to the next, the Cougars might look like state Class AA title contenders or, perhaps, the sixth-best team in their conference. Tropical storms are more predictable than Centennial, a team that is so up and down its fans are becoming prone to seasickness.

Team Enigma took its high-wire act to a new level on Thursday, Jan. 14 against Andover, looking dominant in building a four-goal lead through two periods then appearing eminently beatable in the third as the Huskies rallied to score four goals.

Centennial eventually held on for an 8-6 triumph in front of an estimated 800 fans at the Andover Community Center in what was about as entertaining a game as you’ll see. Unless, of course, you happened to be one of the goaltenders.

“I don’t like to say I panicked,” said Brett Stern, a Centennial defenseman who was on the ice during the chaotic final seconds as Andover, with its goaltender pulled in favor of an extra skater and in possession of every ounce of momentum, went after the tying goal with abandon, “but I panicked.”

Panicked or not, Stern and Centennial (7-5-1) held on for a win that was punctuated by James Hughes’ empty net goal as the buzzer sounded. It was the second goal of the final period for Hughes, who interrupted  Andover’s scoring barrage with what proved to be the winning goal with 6:22 remaining.

“I think we played like we didn’t want to lose in the third,” said Stern, a Minnesota State recruit who along with his teammates had been on the losing end of back-to-back 2-1 overtime games against Elk River and Maple Grove. “It’s just hard to see that happen the way it did (against Andover), a couple of unlucky goals. But we just had to play strong and finish out the game.”

Andover, meanwhile, showed why it has one of the state’s most potent offenses. Playing against one of the state’s best defensive corps, senior scoring whiz Cal Decowski had a hat trick, as did fellow Andover center Taylor Portner. The Huskies (10-3-1) now have 90 goals, the second most of any team in the state behind Spring Lake Park.

“We were down by a lot but we didn’t think we were out of it,” said Decowski, who ranks third in the state in scoring with 49 points, three behind leader Joey Benik of St. Francis. “Just keep going.”

Decowski, who was an Upper Midwest High School Elite League standout in the fall and is being recruited by Yale, Brown and UM-Duluth, completed his hat trick in the third period to pull Andover to within 7-6 with 32 seconds left.

Andover co-head coach Mark Manney said the Huskies’ strategy in the closing seconds was to get the puck in deep to either Decowski or Portner, who have a combined 86 points. But when a final pass skipped over a defenseman’s stick and beyond the blue line, Andover’s comeback had struck midnight.

“That’s kind of the story of Andover hockey,” Huskies co-coach Mark Manney said. “We can get close to these guys, and for whatever reason we can’t get over that hump.”

As for Centennial, Cougars coach Erik Aus was at least happy to have avoided what would have been a fourth straight overtime game.

“I’ll be able to sleep tonight,” he said, not sure if that was a good or bad thing. “But now I get to dream about the Bengals.”

Centennial and Blaine, state’s No. 3-ranked team, meet on Saturday in what is one of the state’s biggest rivalries.

1. James Hughes, Centennial
Scored what proved to be the game-winning goal in the third period, and in a game with 14 goals getting the winner is enough to be named the first star. He also beat the final buzzer with an empty-netter, keeping the scorefest going until the very end.

2. Cal Decowski, Andover
Completed hat trick and set up frantic final 32 seconds with goal that pulled the Huskies to within 7-6. He also drew two penalties, missed on a breakaway and played effectively for most of a shift without the use of his stick.

3. Taylor Portner, Andover
Run-and-gun game fit his style to a T, as he wasn't afraid to stickhandle in traffic and launch shots from any and all angles. He too had a hat trick for the Huskies.

Fast and furious first
Goals were scored in most every way in a wild first period, which ended with Centennial leading 3-2. Andover scoring star Cal Decowski ripped a slapshot past Centennial sophomore goaltender on a partial breakaway to open the Huskies' scoring. Andover's Kyle Gausman banged home a rebound goal from not more than a foot outside the crease to contrast Decowski's in-stride slapshot. The prettiest goal was the last, with Centennial's Jordan Lovick sweeping around an Andover defenseman and then flicking the puck into the upper right corner over Huskies goaltender Dane Erickson's glove.

Pulling away on the power play
Centennial took advantage of a 5-on-3 power play in the second period needing only 26 seconds of their 70-second two-man advantage to pull ahead 4-2 on a goal by senior defenseman Brett Stern.

Breaking the law
It was still early in the third period and the speedy Decowski, who came into the game ranked fourth int he state in scoring with 45 points, had not only scored two goals but he also had drawn two Centennial penalties. On the second power play chance created by Decowski, teammate Tyler Portner scored 3:49 into the third as Andover pulled to within 6-4.

Here they come
Just when it appeared Andover was down and out, trailing 6-2 going into the third, the Huskies scored three goals in the opening 8:31 of the final period, the third coming on some nifty stickhandling by Portner, a senior who got his hat trick when his shot through traffic found its way into the net.