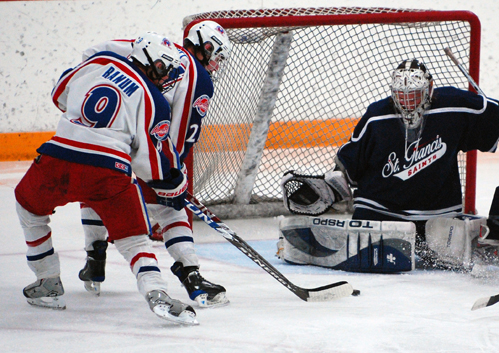 Joey Benik has had better days.

The St. Francis senior, whose goal-scoring exploits are Paul Bunyan-esque in terms of sheer volume and unbelievability, was reduced to a mere non-legend on Saturday, Jan. 16 at Fogerty Arena in Blaine.

Benik’s handcuffs on this day were a couple of guys named Max Corrigan and Nick Auman. The two Spring Lake Park defensemen combined to hold the state’s scoring leader to a handful of shots and a single garbage-time goal in the Panthers’ 8-2 North Suburban Conference triumph.

For Benik, who scored 63 regular-season goals last season in 26 games, a one-goal outing is like a deep sea fisherman returning to port with a lone anchovy.

“Last year, once he got the puck he killed us,” Spring Lake Park coach Tom Benson said about Benik, who has a state-best 29 goals this season through 16 games. “We couldn’t take it away from. So we tried to keep it off his stick as much as we could. We thought the easiest way to do that was to put a defenseman on him.”

Corrigan, a junior, and Auman, a sophomore, alternated shifts and were assigned to shadow Benik’s every move when the St. Cloud State recruit was on the ice. They played their roles exceptionally well, as Benik was held to a shorthanded breakaway in the first period (he missed the net wide right with a blistering shot) and another partial breakaway in the second period (he was severely harassed as he tried to shoot and drew a penalty) before scoring his goal 6:29 into the third period with the Saints trailing 6-1.

“They were just playing smart in the D zone and we couldn’t get anything set up on the power plays,” Benik said. “They came to play and we didn’t.”

Typically, the one time superstars can avoid specialty defenses and find some room to operate is on the power play. The Saints (10-5-1) had five power play opportunities, with Benik scoring on just one of them. The bigger problem for St. Francis, which has lost three of its last four games, was the three-shorthanded goals it allowed.

“We have a lot of fast forwards, so when we’re shorthanded we just ice the puck and then we pressure hard,” Panthers defenseman Chris Benson said. “They go down there and take care of business.”

Spring Lake Park, in the midst of one of the best seasons in the program’s history, was led by Nick Turbitt, a goal scorer who had become more of a setup man until recently regaining his touch. Turbitt scored three goals, including one in which he followed his shot on goal by going airborne over St. Francis goaltender Andy Benik, Joey’s twin brother, and tapping the puck into the side of the net.

“I just saw an open corner, so I just kind of dove over to make sure it went in,” said Turbitt, whose 38 points leads the Panthers and ranks among the top 20 in the state.

Spring Lake Park, which reeled off 12 straight wins to start the season, improved to 14-2-0 with the victory. The most wins the Panthers have had in a season is 17, and their longest winning streak before this season had been six.

“We’ve got a nice little run going,” Tom Benson said. “By no means are we a Blaine. We share a rink here with Blaine; they are a good program. They’ve got a little more tradition than we’ve got.

“We’re starting to put together a little tradition of our own.” 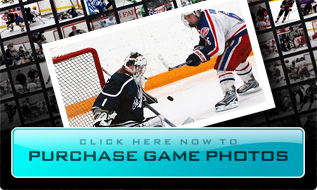 1. Nick Turbitt, SLP
The lanky junior forward scored three goals, including two while the Panthers were shorthanded and one while flying headfirst through the crease, and added three assists to move into the top 20 in the state in scoring with 38 points.

2. Jorde Ranum, SLP
The stocky junior forward had two goals and an assist and, along with linemates Turbitt and Luke Gerding, was a threat to score seemingly on every shift.

3. Nick Auman, SLP
Max Corrigan, SLP
The Panthers defensemen alternated shifts, during which they were assigned the inglorious duty of shadowing St. Francis scoring phenom Joey Benik. They did their jobs almost to perfection, as Benik was held to just a handful of shots and a single, third-period power-play goal when the game was already out of reach.

Daily double
Saturday was a huge day for boys hockey at Blaine's Fogerty Arena, with Spring Lake Park and St. Francis squaring off at 3 p.m. in a North Suburban conference showdow featuring Saints' senior Joey Benik, the state's No. 2 scorer behind Detroit Lakes' Tanner Lane going into the game. The 7:30 p.m. nightcap was set to showcase one of the state's fiercest rivalries in Northwest Suburban foes Blaine and Centennial. Fogerty serves as the home rink for both Blaine and Spring Lake Park.

Opening salvo
With St. Francis playing shorthanded, a burst of speed along the boards at center ice allowed Benik to capitalize on a Spring Lake Park turnover and break in alone on Panthers goaltender Mike Nelson. Benik elected to shoot and fired the puck wide of the net and Nelson's catching glove.

The 'other' Benik
St. Francis senior goaltender Andy Benik, Joey's twin brother, allowed three first-period goals, but had little chance to make a save on any of them. All three goals came from within two-feet of the crease to Benik's right as Spring Lake Park either banged in rebounds or converted breakaway opportunities.

Warmup act
A thrilling overtime finish to the junior varsity game -- Spring Lake Park won 4-3 -- pushed back the start of the varsity game by 12 minutes.