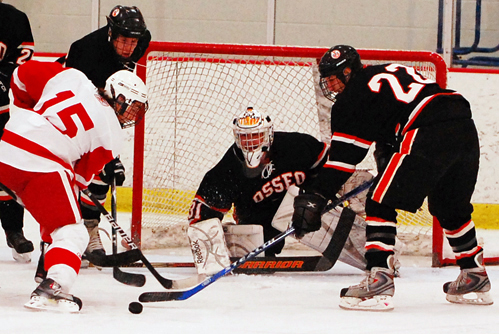 James Hansen stands 6-foot-2, weighs 215 pounds and hits like a locomotive. He just might just be the state’s most punishing defenseman.

Hansen’s defensive partner is Sam Windle, who at 6-4 and 195 pounds is no less imposing.

“I think our top defensemen are two of the best in the state,” Osseo’s Tim Bonner said about his twin tower teammates.

Bonner, who scored twice in Osseo’s 3-3 tie with Benilde-St. Margaret’s on Tuesday, Jan. 19 at the St. Louis Park Recreation center, should know.

It takes every bit of Bonner’s speed and elusiveness (he is generously listed as 5-9, 165 pounds) to withstand the Orioles’ dual sledgehammers every day in practice. Sometimes though, a little bit of brain power gets the job done, too.

“I always try to get behind other guys in practice when we are in line so I can go against the other D,” Bonner, Osseo’s leading goal scorer with 19, said with a grin. “But it’s a nice challenge, it prepares me for games.”

Bonner’s two goals helped stake Osseo to a 3-2 lead after two periods, an advantage the Orioles held until the closing minutes of the third. Benilde-St. Margaret’s tied the score on a goal by Patrick Steinhauser with 2 minutes, 3 seconds left in regulation.

“It’s disappointing because until the last two minutes we weren’t giving them any scoring chances whatsoever,” Osseo co-head coach Mark Phenow said. “We were great with the puck, no turnovers. All of a sudden boom, one turnover, and they come down … shot, goal.

“We thought the kids deserved a win tonight.”

Steinhauser’s goal was set up by Christian Horn, who carried the puck into the Osseo zone and held the puck and held it and then held it some more until he could draw the Orioles’ defense to him, leaving Steinhauser open in the high slot.

Steinhauser’s goal mattered only because Red Knight’s goaltender Jacob Meyers turned in one of his best performances of the season, stopping 40 shots. Osseo held a territorial advantage in the third, and the Orioles unloaded 15 of their shots in that period.

Amidst all those saves – at least five belonging squarely in the spectacular classification -- was an overtime shot off the intersection of the right post and crossbar by Casey Cardille, who briefly celebrated what he and his linemates thought was a goal. The puck, however, dropped straight down and was sitting in the crease just in front of the goal line until a Red Knights defenseman alertly whacked it away.

“Our defense batted it out, so that was pretty nice,” Meyers said. “I would say the defense is the goalie’s best friend when that happens. Everybody gets a bounce, and I got one there.”

Meyers, who made 41 saves in a 2-2 tie with Hill-Murray on Dec. 8, considered the performance one of his best of the season.

“I would say it’s probably the top three games I’ve played all year,” said the senior who was a standout in the Upper Midwest High School Elite League in the fall. “It was a good one.”

Considering the Red Knights lost senior standout Brett Patterson to injury early in the game (he was cut in the foot by a skate in a freak accident), they trailed all but a few minutes of the third period and it is finals week for his players, Benilde-St. Margaret’s coach Ken Pauly wasn’t too upset with the outcome.

“I wasn’t sure what to expect when I saw (the Orioles) walk in here,” Pauly said. “Those guys are huge.”

Turns out it was the smallest of the Orioles, however, who made the biggest impact.

“I loved him,” Pauly said about his impression of Bonner’s ability. “I mean I hated him, but I loved him.” 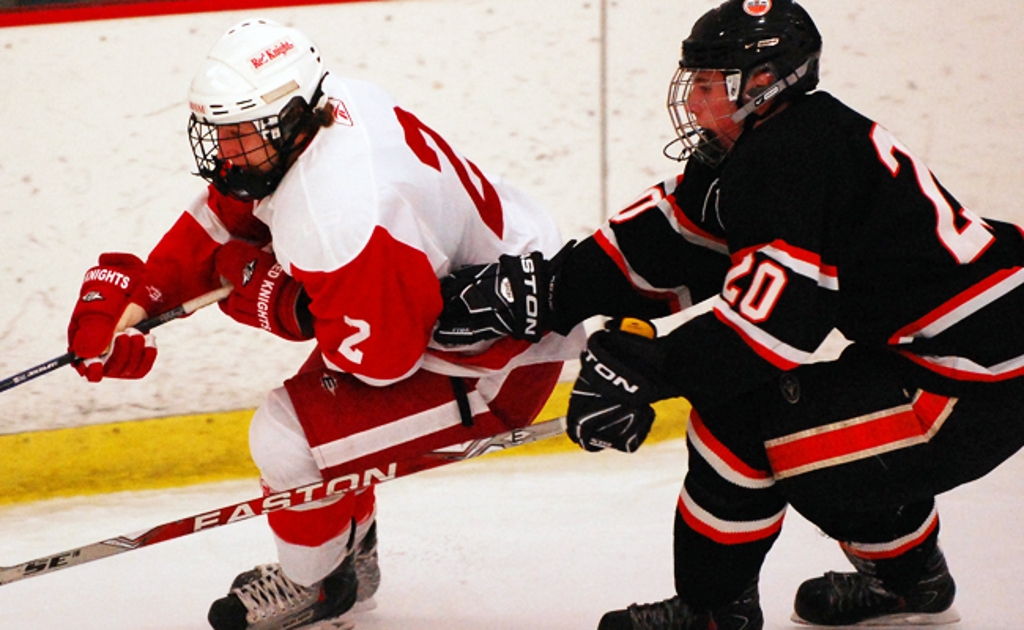 1. Jacob Meyers, B-SM
Senior goaltender got better and better as the game progressed, and that was trouble for the Orioles. Meyers made a series of game-salvaging stops in the third period, and in overtime he also got a little help from his good friend the crossbar on a Casey Cardille shot. Meyers finished with 40 saves.

3. Christian Horn, B-SM
Sophomore did all the heavy lifting on the game-tying goal late in the third period, carrying the puck into the Osseo zone and holding it for seemingly an eternity before feeding an open Pat Steinhauser in the slot.

Putting in the time
Both Osseo and Benilde-St. Margaret's are familiar with overtime games this season, although when the two teams are involved, nothing seems to be settled. Tuesday's game finished in a 3-3 tie, the second overtime tie for B-SM this season and the third for the Orioles.

Coming on strong
Benilde-St. Margaret's goaltender Jacob Meyers made several game-salvaging saves in the third period, the best of which was a last-second cross-crease slide that prevented Osseo's Tyler Dahlberg from popping the puck into an open net.

Collision course
Osseo defenseman James Hansen delivered a tooth-rattling open-ice hit in the first period, a blow that sent Benilde-St. Margaret's David Tranvik flying backwards onto the ice and Hansen to the penalty box for charging.

Scoring machine
With all the high-octane forwards on the Benilde-St. Margaret's roster, it was Osseo's Tim Bonner, a 5-foot-9, 165-pound junior, who was the standout through two periods. He scored twice and either created or just missed on several more high quality chances. Bonner's two goals put him at 19 for the season.