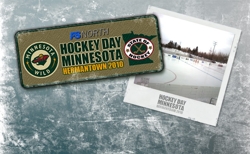 Hockey Day 2010 is the biggest thing to hit Hermantown since … well … ever?

“This is it, right now,” longtime Hawks coach Bruce Plante said when asked to name the most anticpated event to ever come to town.

There’s been a buzz in the western Duluth suburb for weeks as organizers and volunteers have been preparing for a series of outdoor games at Hermantown High School on Saturday, Jan. 23. The main event will be the beloved hometown Hawks taking on defending state Class AA champion Eden Prairie in a classic small school vs. big school matchup featuring two of the state’s hottest teams.

All of it comes with a “weather permitting” caveat.

“When we took the game I was concerned about it being 25 below, not 25 above,” Eden Prairie coach Lee Smith said. “It’s kind of a surprise that we are worried more about rain than frostbite.”

The forecast leading up to the games is calling for temperatures in the low- to mid-30s and a chance for “wintry mix” precipitation. Organizers say the games will go off as scheduled outdoors under most any weather conditions.

“You know what, it’s Minnesota hockey,” said organizer David Kohlquist. “They used to play through it in the olden days. Let’s play hockey.”

Kohlquist said as long as the ice conditions don’t deteriorate and become a safety issue for the players, the games will not be moved indoors to the adjacent Hermantown Arena. Fox Sports North will be televising the two boys games live. All the cameras, cables and other equipment involved in the broadcast were to be put in place starting Friday morning.

“Once they start setting up there’s no turning back,” Kohlquist said. “It’s not like it’s a 10-minute process to move everything indoors.”

Plante said the temperature dropped to 12 degrees Wednesday night, allowing for volunteers to put several layers of fresh ice onto Rink No. 3, one of five outdoor rinks adjacent to the high school and the site of Saturday’s three games.

“They flooded all night pretty much,” said Plante, in his 21st season as the Hawks’ coach. “I think the ice is going to be good. I think the ice conditions are going to be fine. I think the only way we would go indoors is if the ice becomes a problem. We’ve put too much into this and the kids are looking forward to this too much not to play outside.”

Metal bleachers that will provide seating for 2,000 fans are in place on either side of the rink, which has the full array of lines painted on the ice and a healthy lineup of sponsors displayed on the boards. The biggest difference from a normal rink is the absence of Plexiglas. Steel fencing at each end is all that will keep the puck in play.

Both Hermantown and Eden Prairie have held outdoor practices in preparation for Saturday’s game. The Eagles practiced on an outdoor rink near their home arena last week and again on Wednesday.

Smith said he plans to play his entire roster, including both goaltenders, in a game that spotlights two of the state’s best forwards in Eden Prairie’s Kyle Rau and Hermantown’s Adam Krause.

“What we have to remember is that it’s an important game, yet it is also an event,” Smith said. “But it is going to be a great day.”