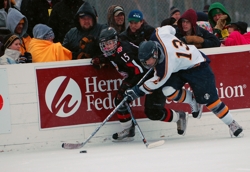 Fans stood three and four deep ringing the rink, which was built, by design, without Plexiglass.

So the transition went from ice to boards to hundreds upon hundreds of rabid Hermantown fans cheering lustily for their beloved Hawks. Those closest to the action in the estimated crowd of 3,500 had a little fun with the boys from the big city, too.

“It was different,” Eden Prairie junior Kyle Rau said about the Saturday, Jan. 23 Hockey Day Minnesota game at Hermantown High’s Outdoor Rink No. 3. “Being the away team, they were chirping at us the whole game.”

Rau did his part to silence the huge crowd, scoring a hat trick to lead the defending Class AA state champion Eagles past the Hawks 4-3 in a thrilling matchup that featured the No. 3-ranked teams in Class AA and A, respectively.

“It’s outdoors, you can’t beat that,” Rau said. “It is something you would do as a kid, going outside and messing around on the pond. This was a lot fun.”

“Some guy told me my skates were untied,” Rogge said. “Or they would say I’m ugly or something like that.”

The game was the second of the day, following Hopkins’ 6-0 win over Duluth Marshall. Weather conditions that seemingly changed from minute to minute and the fluctuating low-to-mid 30s temperatures led to a grab-bag of precipitation that included rain, sleet and snow and put the entire made-for-TV spectacle in jeopardy.

Hermantown coach Bruce Plante was standing on the rink at 1 a.m. Saturday, nervously looking down at blue lines that not only weren’t completely frozen but, even worse, starting to bleed into the rest of the ice surface. He wondered if one of the biggest events to ever hit Hermantown, a Duluth suburb with a population of about 8,000, was actually going to go off as planned.

“We were worried that this thing wasn’t going to freeze up,” he said about the rink. “Then it started raining at about 1 o’clock, and it started freezing up after that, so that was really nice. 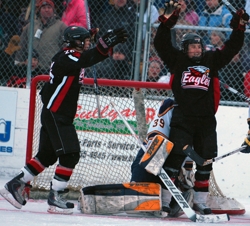 Ice that was in good condition for the opening game in the morning softened by the time Eden Prairie and Hermantown squared off. It got particularly mushy at the conclusion of the first and second periods, when advancing the puck more than a few feet at a time became a challenge.

“The best ice of the whole game was the third period when it kind of chilled off a little bit,” Eden Prairie coach Lee Smith said. “But the end of the first and second it was really sloppy. The puck wouldn’t move. And they seemed to feed on it, and we got on our heels.”

Both coaches said moving the game indoors to the adjacent Hermantown Arena was never a consideration.

“Last night we talked about it, and we said we’ll play in boots if it means we can play outside,” Smith said. “Because Hermantown has gone through too much (preparation) not to be able to have their day. So we didn’t even bring it up.”

Hermantown star Adam Krause said that while the Hawks suffered just their second loss of the season, the day was a huge victory for the community.

And all those fans leaning over the boards, clapping and yelling and doing some of that chirping? Turns out a lot of them were Krause’s boyhood pals. Talk about a home ice advantage.

“You want to stay focused on the game a little bit, but you peek over here and there and you see your buddies and it’s just overwhelming,” said Krause, a UMD recruit who had a goal and an assist and over the years has played “too many to count” pickup games on rink No. 3. “It reminds you back when you used to rink rat. It just brings you back.

"We lost, but we lost to a good team. But I got to do it with my buddies, just like we used to do it back in the day. We’re just televised now." 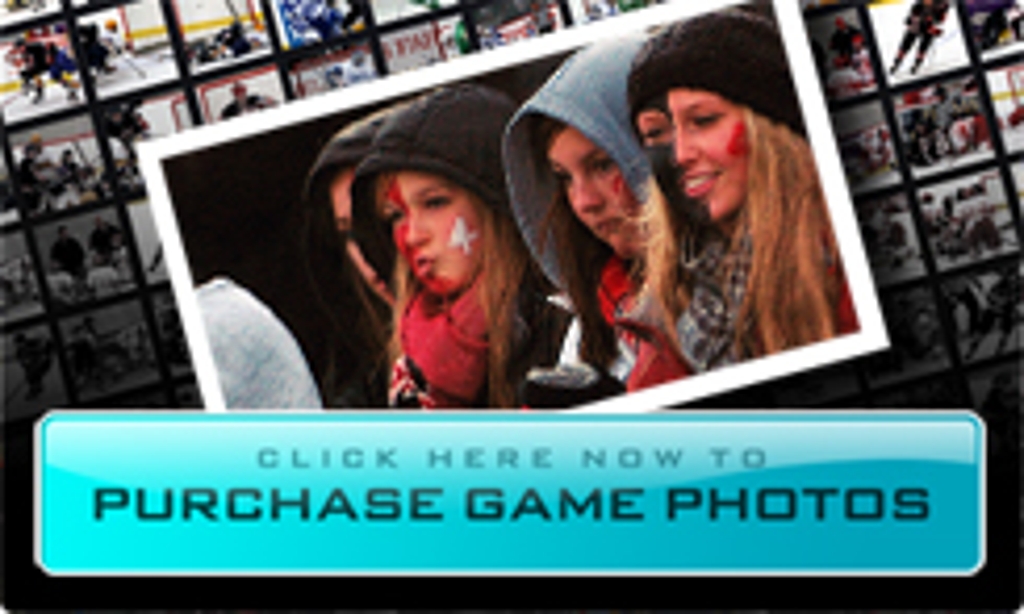 1. Kyle Rau, Eden Prairie
Is there a better junior forward in the state? Rau had three goals to power the Eagles past the Hawks and silence their rabid fans. The 5-foot-7 Rau has scored at least a hat trick in four of his last seven games and his 30 goals this season ranks fourth in the state. He also dished out a punishing open-ice hit on Hermantown star Adam Krause despite giving up seven inches and 30 or so pounds.

2. Adam Krause, Hermantown
Senior Mr. Hockey candidate and UM-Duluth recruit scored a goal, registered an assist and nearly tied the game at 4 when he grazed a shot off the crossbar with about four minutes left. He also used his 6-foot-2 body to his advantage, routinely pounding Eagles defensemen into the unforgiving outdoor rink boards and steel fencing.

3. Chase Loken, Eden Prairie
Senior defenseman (pictured below) was big part of Eagles' breakout that ran crisply for most of the game despite mushy ice and intense forechecking pressure from the Hawks. Loken also kept his head when he was nearly pitchforked over the boards during a run-in with Hermantown's Krause. 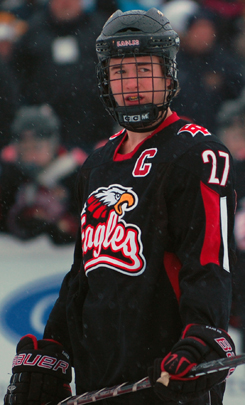 Hanging with the big boys
Longtime Hermantown coach Bruce Plante won't say this is his best Hawks team. Not yet. "We'll see," he said. But his team gave Eden Prairie, the defending large-school state champion, all it could handle in a Hockey Day Minnesota classic. "I didn’t want to get blown out, that’s for sure," Plante said. "You don’t want to go into a game like this and be over your head. I thought we had a team that can compete with anyone in the state, and I think we showed that we did. I’m real proud of our guys."

First-class operation
From the giant, heated tent that served as a concession stand between periods to the new scoreboard placed on top of the warming shed, Hermantown's Hockey Day setup at its outdoor rink complex was planned to the last detail. The blocks of wood burning in the Hockey Day Minnesota 2010 fire rings were a nice touch, as were the makings for S'mores available for purchase.