Step right up, take your shot

The Week Ahead features the latest top team to take on No. 1 Minnetonka 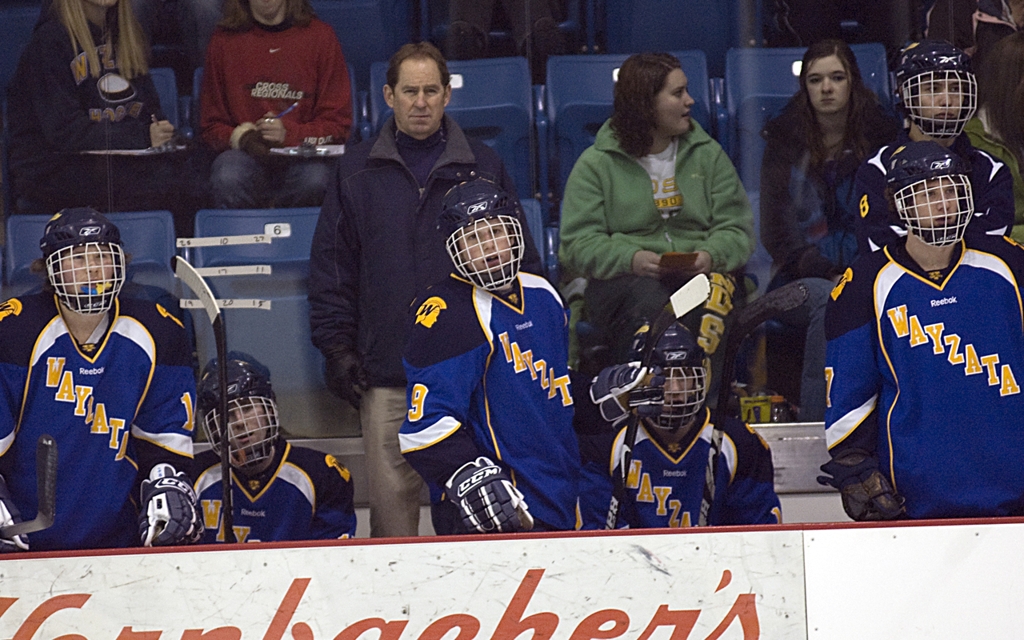 Coach Carl Davis and No. 6 AA Wayzata attempt to be the first team to knock off top-ranked and unbeaten Minnetonka.

Who’s going to knock off Minnetonka?

For the second straight week, the Hockey Hub’s game of the week features a Classic Lake powerhouse hoping to beat the state’s only unbeaten team. So far, it doesn’t appear anyone has a terrific chance to best topple No. 1 AA Skippers (18-0-0), particularly after they routed No. 2 Edina last Saturday, 7-1, but the latest team to take a shot will be No. 6 AA Wayzata (13-2-1).

Both teams are 2-0-0 in the Classic Lake Conference and of course, have yet to meet each other. The Trojans beat Edina (1-0) and Armstrong (7-1) in its first two conference games, while Minnetonka blitzed Edina and Hopkins (5-2) in its first two games in the league.

Wayzata is stingy defensively, allowing just 1.75 goals a game and recently shutting out perennial state power Moorhead twice in a week. Goaltenders Alex Clayton (4-1-1, 1.84, .920) and Andrew McIntyre (9-1-0, 1.61, .912) have been sharing duties. Clayton hasn’t allowed a goal in more than two games, including the shutout of Edina, while McIntyre was in goal for both blankings of the Spuds. They’ve combined for six shutouts on the season already and are certainly helped by a stout defensive corps that includes junior D.J. Jones (4-14-18), senior Lucas Whelan (5-10-15), junior Marc Richards and the appropriately-named (but not pronounced that way) sophomore Miles Death.

The Trojans aren’t as high-powered as Minnetonka, but they do have good scoring balance, led by the underclassman line of juniors Tony Cameranesi (9-16-25) and Tyler Klein (8-4-12) and sophomore Mario Luca (10-13-23). Scott Holm (13-12-25) leads the team in goals and is tied with Cameranesi for the points lead. Danny Walsh (5-11-16) and Seth Barnes (3-9-12) have also tallied double-digit points, two of the eight Trojans to do so already this season.

Minnetonka survived the four-week absence of star forward Max Gardiner, a University of Minnesota recruit, without a hitch. Now that he’s back, the Skippers appear unbeatable, scoring 5.7 goals a game and allowing just 1.3.

Minnetonka is loaded in all three zones – offense, defense and goaltending.

Junior Thomas Schutt (13-12-25) has also found his scoring touch and makes the Skippers even deeper up front along with seniors Jake Thornberg (6-7-13) and Tommy Lundquist (3-7-10). In all, a dozen different Skippers already have scored in double figures.

On defense, everyone knows about the three DI recruits in high-scoring Justin Holl (15-10-25) and Andrew Prochno (7-25-32) and powerful defender Troy Hesketh. But the Skippers are also getting good minutes from sophomore Michael Prochno and senior Jake Rossman.

Senior Jim Kruger (14-0-0, 1.36, .941) is the unsung hero of the team, it’s last line of defense for the past three years and the all-time school record holder for career goaltending victories. He’s steady and calm at all times and has come up with big saves on the rare occasions he’s been needed.