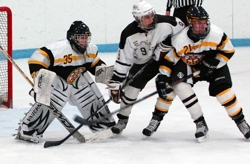 To say that Apple Valley is young would be an understatement akin to describing Kansas as flat or the Sahara as dry.

There are more sophomores listed on the Eagles’ roster (10) than juniors and seniors combined (nine), a typically unheard of ratio for a big-school program.

Now, though, even three-quarters through the season, the ice rink remains as much a classroom as it is a playing surface for fuzzy cheeked Eagles, who were forcefed a hard lesson on Thursday, Jan. 28 at Apple Valley Sports Arena.

Lake Conference rival Burnsville scored on its first shot -- 27 seconds in -- added another goal four minutes later and, by the time the opening period was over, had a healthy three-goal lead.

“They took control of the game early, which good teams do, and it’s tough to recover from that in this conference,” Apple Valley coach Jerry Hayes said after the Eagles’ 3-1 loss to the Blaze. “We’ve got some learning to do.”

After winning three games in as many days to take home the championship trophy of a mid-December tournament in Grand Forks, N.D., Apple Valley – youthful or not -- appeared poised to contend for the conference crown.

Along with "Avoiding Slow Starts", “Overcoming Injuries” is another chapter the Eagles reluctantly have been studying, as they’ve had to deal with the loss of forward A.J. Michaelson, the best of their sophomores. Michaelson, who still ranks third on the Eagles in scoring with 18 points (10 goals, eight assists) despite missing their last five games, suffered what Hayes coyly described, NHL-style, as a “lower body injury” while playing in the Upper Midwest High School Elite League in the fall. He “tweaked” what is believed to be that same groin injury on Jan. 9 against Eagan and has played sparingly since.

“We decided to just shut it down for a bit, so when he does come back, whenever that is, he can come out full speed and he doesn’t have to worry about it, he doesn’t have to second guess his legs and he can go full speed,” Hayes said “Because he is a treat to watch certainly when he is able to do that.”

Adding injury to injury for the Eagles was the concussion suffered by defenseman Vince Pedrie last weekend when he slipped and fell while out with teammates fundraising for the program.

“He was going door-to-door and slipped and bonked his head,” Hayes said about Pedrie, who had been running the Eagles’ power play.

The Eagles went scoreless in four power-play opportunities against the Blaze.

“We’re not getting as many goals, obviously,” Apple Valley forward Kris Goodman said about adapting to the losses of Michaelson and Pedrie. “It hurts a little bit, they bring a lot to the team. That’s what we need right now, for those guys to be there and lead us.”

Goodman scored the Eagles’ lone goal with 3 minutes, 39 seconds left to ruin Burnsville goaltender Bodhi Engum’s shutout bid. Engum made 24 of his 32 saves over the final two periods when he was repeatedly tested by the Eagles.

“He was controlling his rebounds pretty well, and we couldn’t really get going,” said Goodman, whose hustle was rewarded when he pounced on a rebound and slammed it past Engum. “Finally at the end we started to pick it up and move our feet.”

Adam Smyth, Eddie Wittchow and Cory Chapman scored the first-period goals for the Blaze, who are 7-1-1 in their last nine games after starting the season by winning just two of their first nine.

“We’re improving a lot from the beginning of the season,” Engum said. “Our penalty kill and power play has improved, our forecheck, backcheck -- everything has improved, really. And we’re only getting better.”

"We're as happy as you can be after that bad of a first period," Goodman said, "but there’s a lot to be done."

And much to learn. 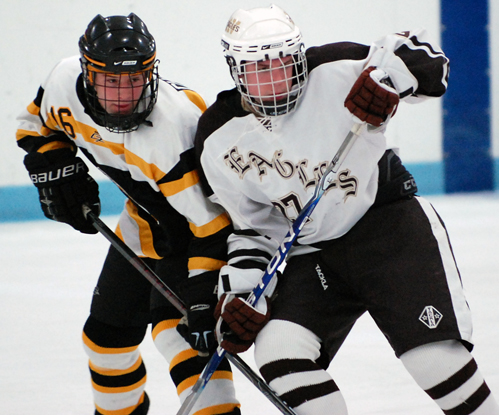 Cory Chapman, left, of Burnsville and John Dirks of Apple Valley jockey for position during a face off. Photo by Helen Nelson

1. Bodhi Engum, Burnsville
Junior goaltender (pictured below) had 33 saves for the Blaze, making even the most difficult ones look routine. He showcased a cobra-quick catching glove on several third-period shots, and on the ones he couldn't snare he was in position to block them with his chest or shoulders.

2. Kris Goodman, Apple Valley
Junior forward finally got a puck past Engum late in the third period when he slammed home a rebound and, along with linemate Jordan Ocel, showed high energy and tenacity levels by consistently buzzing Burnsville's defenseman. 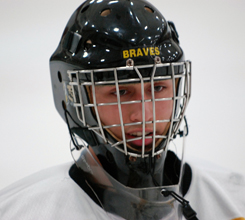 Missing in action
Injuries knocked three of Apple Valley's top 10 players out of the lineup for Thursday's game against Burnsville, including A.J. Michaelson, one of the state's top sophomores, and standout sophomore defenseman Vince Pedrie. Another Eagles sophomore, forward Trent Heuer, missed the game because of injury. Michaelson, who has missed four Eagles games, still ranks third on the team with 18 points (10 goals, eight assists). For Burnsville, senior forwards Alec Wroblewski and Alec Fisher were among the scratches due to injury.

Fast starting Blaze
Burnsville's Adam Smyth needed just 27 seconds to score the game's first goal on the game's first shot, as he burst down the left wing and rifled a hard shot that snuck through the pads of Apple Valley goaltender Aaron Gretz.

Apple Valley can't solve Engum
The Eagles had the better scoring chances in the second period, but they were unable to get the puck past Burnsville junior goaltender Bodhi Engum. The best Apple Valley chance came on a breakaway by sophomore Jordan Ocel less than three minutes into the period. Engum, who entered the game ranked 10th in the state in save percentage (.923) managed to block Ocel's rising shot with his chest and control the rebound so there was no second chance for the swarming Eagles.