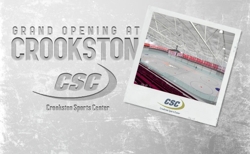 The fertile, windswept farm country in the far northern and western reaches of Minnesota isn’t just good for growing sugar beets. Some of the state’s finest hockey facilities have sprouted from the ground there, too.

There’s the Gardens in Warroad, the Ralph in Thief River Falls and, opening on Saturday, Jan. 30, the CSC in Crookston.

The $15 million Crookston Sports Center replaces the old Crookston Civic and Sports Arenas and will be christened with a day of festivities, capped by the hometown Pirates boys hockey team taking on longtime rival East Grand Forks.

“It’s huge, absolutely,” Crookston coach Jon Bittner said Thursday about the opening of the new arena. “Not only for our town, but for the entire area.

“I was there last night with middle son and he was unbelievably excited. We haven’t even had a practice there yet.”

The new facility includes three ice rinks ringed by a quarter-mile walking track. The Pirates were to take the ice there for the first time there on Friday on one of the practice rinks. Saturday’s schedule of events also includes an afternoon girls game between Crookston and Lake of the Woods. The Pirates and Green Wave are scheduled to start at 7:30 p.m.

“I would expect we’ll have a packed house,” said Bittner, who estimated the main arena will hold about 1,800 to 2,200. “We’re lucky in that our fire chief is also a hockey fan.”

While the rivalry between Crookston and East Grand Forks doesn’t get the attention of, say, Roseau vs. Warroad, the two and often three annual matchups between the Pirates and Green Wave usually rank among the most fiercely contested in the state.

Crookston coach Cory Chupka agreed to move the original date of the game back to coincide with the CSC’s grand opening.

“We’ve done it one other time,” Chupka said. “We opened (Ralph Engelstad Arena) in Thief River Falls, too. These types of games are always a lot of fun.

“We’re proud and honored to be part of (Saturday’s) game and that opening. The guys are really looking forward to it.”

East Grand Forks beat Crookston 5-3 on Jan. 22 in the type of back-and-forth game that has become typical in the series. Crookston is 5-13-1 playing a schedule that includes several of the state’s top ten-ranked teams in Class A and AA. East Grand Forks, which plays a similar schedule, is 8-11-0.

“Every game we play against them, no matter whose record is what, it has always been an interesting game,” Chupka said. “It has been a great series.”

Many of the greatest games between the rivals separated by 22 miles of farmland were played in the Crookston’s original, barn-shaped arena. It was built in the 1930s as part of a government program designed to stimulate the economy. The second rink at the facility was added in the 1970s.

“I’m going to miss the oldest one,” Bittner said. “They used to have natural ice there over a dirt floor. Then they would put a wood floor over it and have roller skating and dances and weddings. The VFW and (American) Legion would hold meetings there.

“It’s quite a historic place.”

With the opening of the Crookston Sports Center, the doors to the old Crookston Civic and Sports Arenas were to be locked. The old facility sits in the Red Lake River flood plain and eventually will be torn down. As for the new arena, Bittner said the Pirates will take their time getting their new locker room set up.

“We are going to do it after the season is over,” he said. “We have one chance to do things right.”