Rams senior puts his stamp on fabled rivalry with Warroad 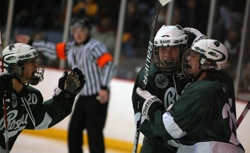 It is one thing to hear stories about the rivalry between Roseau and Warroad. It is something altogether different to experience it.

So when Taylor Hedlund moved north from St. Michael to the hockey Mecca that is Roseau, he might just as well have been relocating to another planet.

“It’s huge. It’s the biggest thing in town, the whole community follows it,” Hedlund, a senior, said with a piano-key smile about the annual showdowns with neighboring Warroad. “It’s just awesome.”

The rivalry got a whole lot better for Hedlund on Monday, Feb. 1, as he scored twice in the opening six minutes for the visiting Rams as they rolled past the host Warriors 7-3 in front of an estimated crowd of 2,000 (Warroad's listed population is 1,722) at The Gardens.

The arena's huge lobby was a high-decibel buzz more than an hour before the game, scholar athletes from both teams (Trevor Baumgartner from Roseau, Eric Hebel from Warroad) were honored on the ice before the opening puck drop, T-shirts were thrown into the crowd between periods and a Roseau team photo was taken on the ice after the final horn sounded.

No, this is no ordinary game.

The Cadillac of state hockey rivalries routinely draws nationwide attention, and on this night many of the extra festivities were tied to the game being part of the "Great American Rivalry Series" sponsored by the Air Force and iHigh.com.

When the folks in Roseau get to dissecting this game, they won't be talking about the free T-shirts. They’ll be talking about Hedlund, the kid who was recently promoted from the third to second line and skated with seemingly limitless energy and abandon on every shift.

"I’ve just really been concentrating on moving my feet,” said Hedlund, whose two goals give him a grand total of four this season. “That’s what (the Roseau coaches) have been telling me all year, and I think I’m starting to get it.”

With Hedlund lighting it up on the Rams’ second line and senior standout Adam Knochenmus back in top form after missing several weeks with a separated shoulder, Roseau had more than enough firepower to get past the Warriors, who started sophomore goaltender Andy Foster in place of injured senior Shawn Storey. Foster, making just his third start, was subjected to all sorts of close-range shots by the Rams and had little chance to stop several of them.

“We weren’t very good in the D zone tonight,” Warroad coach Albert Hasbargen said. “I don’t know if they were that quick and we just weren’t sticking with them or what.

“We talked about it before the game to stay on them and not to give them any good chances and to limit the shots on a young goaltender, but it didn’t happen. We didn’t even get the first shift in and we got scored on.”

Warroad eventually tied the score at 2 in the first period on a pair of Aaron Rasmussen goals. But the Warriors gave up two goals in the opening minute of the second period and never were able to recover.

“You get into a grind-it -out game with them, and you are in for trouble,” Roseau coach Andy Lundbohm said. “So it was nice to get that lead.”

Lundbohm was talking outside a noisy Roseau locker room, the spirited celebration going on inside providing more than enough evidence that this rivalry is alive and thriving even though these teams have long since stopped meeting in the playoffs (Roseau is in Class AA, Warroad is in Class A).

“They needed this one,” Lundbohm said. “We were really flat against Moorhead (in a 6-2 loss earlier in the week). Really flat. We needed a bounce back game, and this was a good one.”

When it’s Warroad vs. Roseau, no matter the circumstances, it’s always a good one. 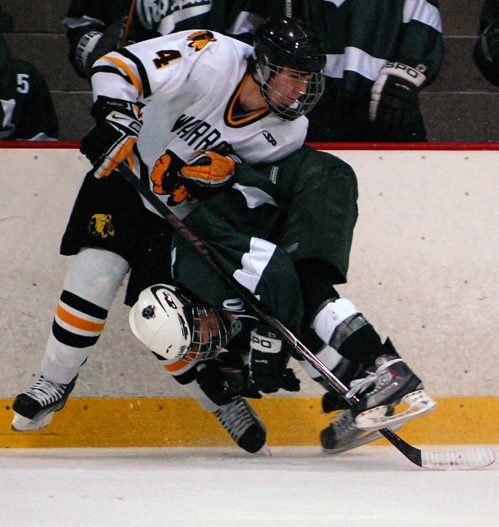 Warroad's Hayden Timm puts a shoulder into Roseau's Josh Erickson during their Feb. 1 matchup at The Gardens in Warroad. Photo by Helen Nelson 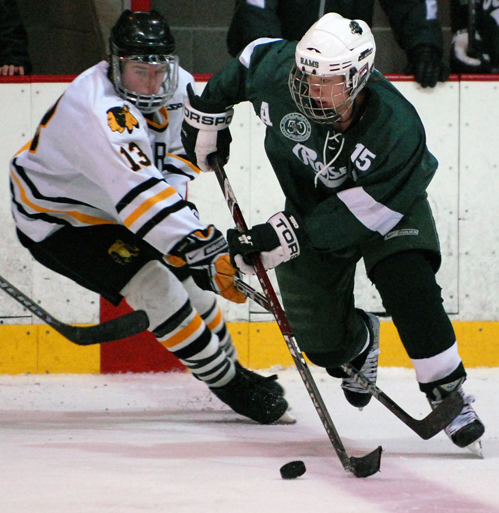 1. Taylor Hedlund, Roseau
Senior forward who recently was promoted to the second line, scored twice in the opening 5 minutes, 45 seconds, giving the Rams a better start than even they could have hoped for considering they were playing their biggest rival on the road. Hedlund flashed his speed all night and had several other quality scoring chances, giving the Rams two potent scoring lines.

2. Shane Omdahl, Roseau
Junior forward (pictured below) scored a beauty midway through the second period, drilling a high shot into the upper corner of the net from near the right face-off dot. His goal put the Rams ahead 5-2 and took much of the remaining life out of the Warriors. Omdahl also had an assist and joined linemates Adam Knochenmus and Kevin Erickson on an ever-dangerous top line.

3. Aaron Rasmussen, Warroad
Senior forward kept the Warriors in the game in the first period, when he scored twice. He also gets high marks for vigorously body slamming himself into the glass near the Warroad student section after scoring his second goal. 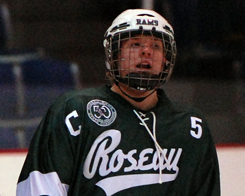 Under seige
Sophomore goaltender Andy Foster, making his third start for injured senior Shawn Storey, couldn't be faulted on the majority of Roseau's five goals through the first two periods. Among their goals, the Rams scored on a breakaway, a close-range rebound and wicked shot into the upper mesh.

Back-to-back backbreakers
Roseau scored goals 20 seconds apart in the opening minute of the second period to surge to a 4-2 lead and effectively quiet the crowd estimated at 2,800. The prettiest of the Rams' goals, also in the second period, was Shane Omdahl's rocket into the upper corner from the slot.

Goal-fest
Roseau scored on its second shot to take a 1-0 lead, and Taylor Hedlund added another goal just a few minutes later as the Rams went up 2-0. Not to be outdone Warroad, which was being outshot 6-0 at the time, scored on its first shot on goal less than seven minutes into the game when Aaron Rasmussen ripped a shot to the right of Roseau goaltender Ethan Kvidt.

Little ones
They start them young in Warroad, and in a cool and unique pregame ritual two future Warriors were announced along with the varsity starters before the game. Remember the name Jason Shaugabay. He is a four-year-old termite who, although no taller than a fire hydrant, skates like a future T.J. Oshie.

Junior varsity runaway
Warroad beat Roseau 5-1 in the junior varsity game, as Casey Anderson had a goal and three assists for the Warriors in the blowout victory.

Injury update
Storey, who suffered a sprained medial collateral ligament in his left knee against Crookston on Jan. 26, could be back skating again as early as next week but, according to Warriors' coach Albert Hasbargen, is expected to be out of the lineup for another two to three weeks. Another Storey, senior defenseman Aaron, hasn't played since suffering a kidney injury in the first meeting with Roseau and is out indefinitely.