Silence is golden for this Blue Devil

Q and A with Virginia/MIB goaltender Casey Myhre 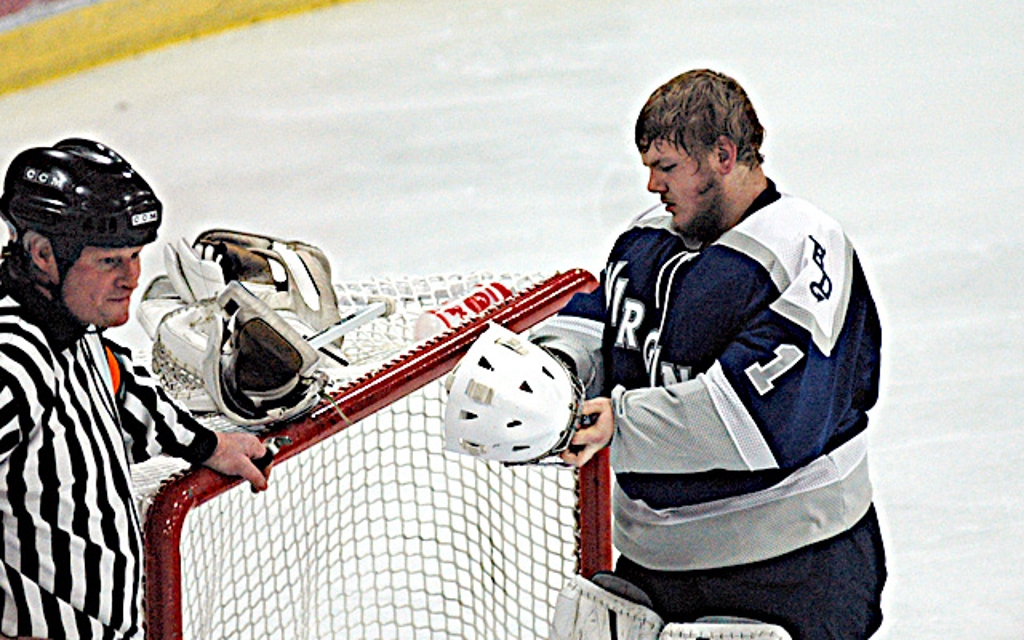 When he’s sliding across the crease to snatch a blistering shot out of thin air or fighting for the puck in a goal mouth scramble, Virginia/Mountain Iron-Buhl senior goaltender Casey Myhre certainly doesn’t look like a rookie.

Myhre began his senior season never having played a single minute of varsity hockey. And yet he opened up his first-ever start with a 3-0 shutout of Cloquet-Esko-Carlton back on Nov. 28, making 39 saves against the Lumberjacks.

“He proved both to himself and the coaching staff that he had the determination to do well this year,” said Casey’s mother Danita Tassi-Myhre, who relayed the story of how she found out he would get the opening night start.

“Before the Cloquet game, he stopped by where I was working that Saturday morning and told me to come outside because he wanted to tell me something. I went out to meet him in the parking lot and he said, ‘Mom, are you going to the game tonight?’ I replied, ‘Yes, I am.’ He then said he was given the nod to play and his smile lit up the parking lot. We both hugged and celebrated that moment together.

“As he turned to get in the car after our conversation, he looked back at me and said, ‘Mom, never lose hope.’

The moment was even more poignant, as Myhre almost had to give up the sport as a youngster.

Myhre began skating when he was three years old, then switched over to goaltender when he turned 10 years old. His mother didn’t know it at the time, but the change was necessary.

“We found out years later that the main reason he wanted to be a goalie was because he didn't have to worry about hearing when he was on the ice,” said Tassi-Myhre. “You see, Casey is hearing impaired and there is no way he could wear his aids while suited up. He sweats too much and if he was hit, he could become injured, so he plays without them.”

It isn’t obvious on the ice, where Myhre has become a key contributor for the Blue Devils, who are ranked No. 7 in Class A and are seeking a return trip to the state tournament. In splitting time between the pipes equally with Andy Milbridge, Myrhe has compiled a 6-2-3 record with a team best 2.18 goals against and .914 save percentage.

Earlier this winter, the Breakdown spoke to Myhre about the benefits and pitfalls of playing goaltender with a hearing impairment, the relaxation of playing air guitar and the Blue Devils’ hopes in the upcoming Section 7A playoffs.

Breakdown: You have a hearing impairment. Can you tell me both the benefits and pitfalls of playing goaltender with it? How has it affected your hockey career?

Myhre: One benefit to being hearing impaired is when I am at away games, the crowd noise doesn't bother me. But, at times it can hurt me when my defensemen are telling me to play the puck or stop it behind the net and I can't hear them. Although, I don't feel it has affected my hockey career at all.

Breakdown: When you were in youth hockey, you skated out until checking became a part of the game. In order to keep playing, you moved between the pipes. How difficult was the switch?

Myhre: I wanted the switch. They needed a goalie so I thought I would give it a try. As soon as I tried it out, I fell in love with the position.

Breakdown: Will you continue to play hockey next year and at what level are you considering?

Myhre: I am actually going to play college football but if someone was looking at me (for hockey), I would consider it at any level.

Breakdown: Give me a short scouting report on yourself as a player. What are your strengths in nets?

Myhre: I have a good knowledge of the game, good hand-eye coordination, stay calm under pressure, and I am exciting to watch.

Myhre: During the season, I lift every other day and during the off-season I also workout by lifting in the summer. I take part in the Quicker, Faster; Stronger program and I’ve trained at the Goalcrease facility in Edina.

Breakdown: How did you prepare for this season, knowing that the goaltending position was open? How did you feel when you got the nod to be the starter?

Myhre: Before the game after I put my pads on, I like to listen to Pink Floyd. When the guitar solos come on, I play air guitar and it really relaxes me.

Myhre: I grew up following Marty Turco and Patrick Roy. Both of these goalies are unconventional and they always look like they are having a lot of fun.

Breakdown: Tell me about the outlook for Virginia/MIB as we approach sections. Is there any carryover from last year's state tournament visit and what the team expects for this year?

Myhre: We should be one of the top two teams in Section 7A again this year. I think there is carryover from last year's trip to state as our goal is to win the section, go to state again and this time to bring home some hardware.

Breakdown: You've played a very difficult schedule thus far. How has that prepared the team for reaching its goals?

Myhre: It’s given us exposure to teams that we could possibly meet at State. And, it’s also given us confidence, knowing we can compete against those tougher teams. It puts Virginia/MIB on the map.

Breakdown: How well does the community support the program? Can you give me a feel for what a home game at Virginia is like?

Myhre: I feel we have a lot of fans that support us even though we have other winter sports that do well besides hockey. At our home games we have a good atmosphere. The little kids like to hang out after the games asking us for our sticks and pat us as we come off the ice. And, when our band attends the games it really adds to the excitement.

Myhre: The best part of playing high school hockey is possibly getting the chance to play at one of the most well known hockey tournaments in the world. I also have had fun playing with the kids I have known since I was young.