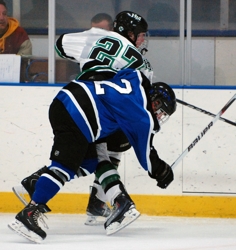 St. Thomas Academy sends out wave after wave of supremely skilled forwards, players who can mesmerize opposing defensemen with their superb stickhandling and slick moves.

When one high-performance Cadets forward comes to the bench, another simply hops onto the ice. They are seemingly as interchangeable as a box of widgets.

Even St. Thomas Academy’s third line got into the scoring groove on Saturday, Feb. 7 against Hill-Murray.

Senior Brady Ramthun, who had scored three goals all season, broke open a scoreless game in the second period when he wheeled into the Pioneers’ zone and fired a wide-angle shot that hit Hill-Murray goaltender Tim Shaughnessey but still had enough steam to dribble into the net.

After that, well, after that the goals got prettier and prettier for the No. 1-ranked Class A team in the state, as the Cadets (16-4-0) did all of their scoring in the second period en route to a 3-1 triumph over the No. 3-ranked (Class AA) Pioneers in front of an estimated 2,000 fans at Aldrich Arena.

A.J. Reid scored the second goal for St. Thomas Academy when he put a head-spinning forehand-backhand move on a Hill-Murray defenseman he caught going the wrong way at the blue line. Reid finished off the play by shoveling a backhand shot high over Shaughnessey’s right shoulder.

Not to be outdone, junior Zach Schroeder corralled a pass from Christian Isackson with time winding down in the second and coolly drilled a shot over Shaughnessey, off the crossbar and into the net. The goal came with 10 seconds left in the period and put the Cadets up 3-0.

“I still thought we could come back,” said dejected Hill-Murray defenseman Chris Casto, who scored the Pioneers’ lone goal midway through the third period. “We had some opportunities, we just couldn’t capitalize.”

It was just the second loss of the season for Hill-Murray (18-2-1), which played without first-line forward and power-play quarterback Kevin Becker, who suffered a concussion in a slugfest victory over rival Mahtomedi on Thursday night. The Pioneers also were without third-line center Charlie Sampair. Yet another forward, Loren French, suffered what appeared to be a knee injury early in the  the third period.

Although Casto and Hill-Murray coach Bill Lechner each went out of their way not to blame the loss on the injuries, it was clear the Pioneers’ offense wasn’t clicking. They looked particularly out of synch on the power play, where they went scoreless in five opportunities.

“St. Thomas, you know what, they were flying,” Hill-Murray coach Bill Lechner said. “They are a good club, and they kicked our butt tonight.

“The wheels fell off.”

As for the Cadets, it was their first win over a top-ranked Class AA team in five tries. St. Thomas Academy has lost to No. 1 Minnetonka twice, No. 5 Blaine and suffered a 4-2 loss to Hill-Murray in the teams’ first meeting this season.

“This is huge,” said Schroeder, whose 21 goals lead the Cadets. “We can play with any team. Winning against Hill-Murray is a big push for our esteem.

“When we get into sections, we’ll have our grit.”

That was the game plan from the start. To show some toughness to go with all that flash and flair.

“The plan going in here was to finish our checks and go to the net,” Vanelli said. “I think we played one of our more physical games, clearly. I think we were doing the hitting.”

The Cadets have two forwards, scoring leaders Christian Isackson (Minnesota) and Justin Crandall (UM-Duluth), committed to WCHA schools. Joining those two in the Upper Midwest High School Elite League in the fall were Reid and Schroeder.

Those four were instrumental in killing off Hill-Murray’s power plays, including one late in the third period. They also followed the game plan to perfection, grinding away at Hill-Murray’s defensemen all night with a ferocious forecheck.

Is the rivalry between these perennial Classic Suburban Conference frontrunners (Hill-Murray leads the conference race by two points over St. Thomas Academy but has played one more game) among the most heated in the state? Judging by the smiles in the Cadets’ locker room and the somber mood of the Pioneers’ afterward, the answer would have to be an emphatic yes.

“You could the see the crowd we had tonight,” Casto said. “We don’t like them very much, and they don’t like us very much. This is a big one for us.” 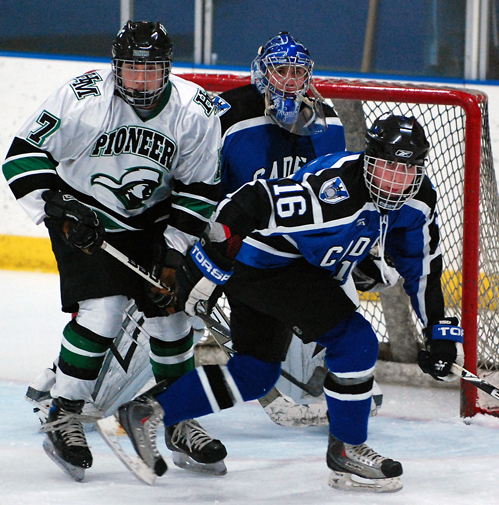 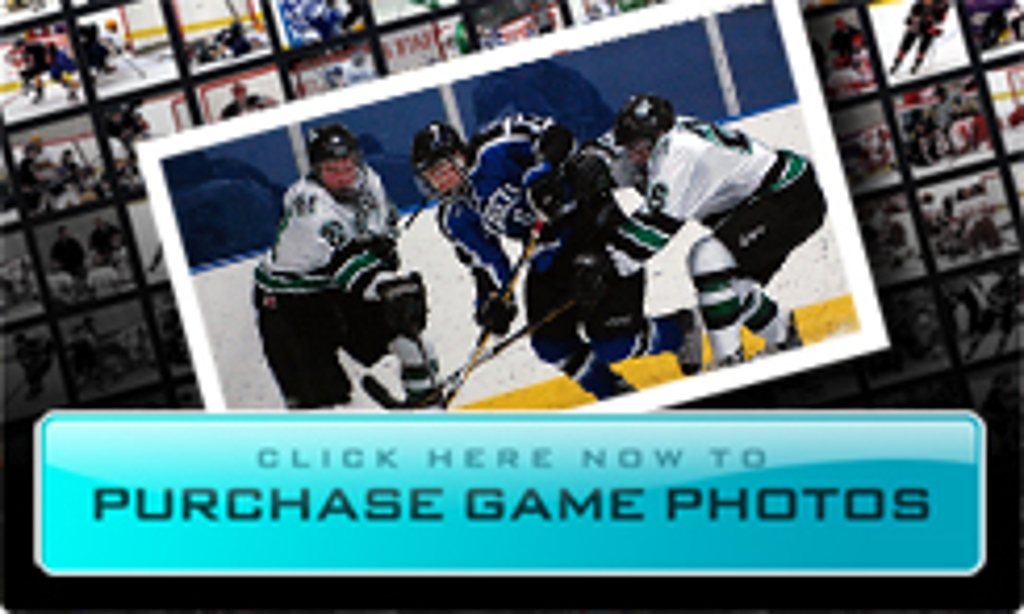 1. Zach Schroeder, STA
Junior forward and brother of Gophers star Jordan Schroeder scored with 10 seconds left in the second period, blistering a shot in off the crossbar, to put the Cadets ahead 3-0. The undersized Schroeder also threw his body around with abandon, following the Cadets' get-physical gameplan to the letter.

2. Zach Wynne, STA
Cadets' goaltender (pictured below) has worked his way into a every-other-game rotation with fellow senior Kurt Altrichter and will no doubt stay there after making 23 saves against the Pioneers, whose scoring chances got better and more plentiful in the third period.

3. Chris Casto, Hill-Murray
Senior defenseman and UM-Duluth recruit scored the Pioneers' lone goal in the third period, showing a goal scorer's touch by whipping a wide-angle shot high into the net. He also played his typical hard-nosed, physical style in the Pioneers' end. 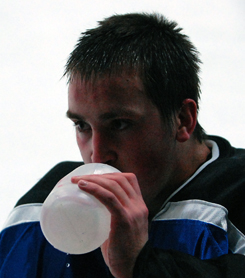 Sharp start
Hill-Murray junior Tim Shaugnessy had a hectic introduction to Saturday's game against St. Thomas Academy, as he was peppered with 15 shots in the opening period. The Cadets buzzed the Pioneers' defensemen for most of the 17 minutes, and all that hard work and hustle in the corners and in front of the net led to two Hill-Murray penalties and an extended 5-on-3 power-play.

Quality, not quantity
Hill-Murry didn't get much going offensively in the first period, but when the Pioneers did generate a scoring chance it typically was from close range. Freshman Zach LaValle had Hill-Murray's first, best chance in the early stages of the first period when he broke in alone on St. Thomas Academy goaltender Zach Wynne and fired a rising shot that Wynne managed to get a piece of with his catching glove. Late in the first period, Hill-Murray's Jack Walsh snapped a shot that clanked off the crossbar, the puck eventually sailing into the section holding the Hill-Murray pep band.

Drought becomes downpour
Brady Ramthun isn't a household name when it comes to St. Thomas Academy's fleet of high-performance forwards, but his second-period goal while flying down the left side on a 2-on-1 rush jump-started the Cadets' more well-known goal scorers. A.J. Reid followed Ramthun's goal by putting a slick forehand-backhand move on a Hill-Murray defenseman at the blueline then shoveling a shot past Shaughnessy. The goals kept getting prettier for the Cadets, as junior Zach Schroeder finished off the second period by scoring on a long-range shot that clanged in off the crossbar with 10 seconds left to put the Cadets ahead 3-0.

Healthy crowd
Spacious Aldrich Arena wasn't packed for Saturday's game between the Cadets and Pioneers, but the Hill-Murray side of the rink was three-quarters full and the the bleachers on the opposite side were about two-thirds filled.

Injury report
Hill-Murray junior forward Loren French went down hard in a corner early in the third period and was stretched out flat on his back on the ice for several minutes before skating off with assistance with appeared to be a right knee injury.

PP can't resuce Pioneers
Trailing 3-1 in late in the third, Hill-Murray had a power-play chance but was unable to generate any sustained pressure against the Cadets' penalty killers.

Post-game selections
The Aldrich clean-up crew was light rocking well after the game, singing along to songs by Meatloaf, The Carpenters and the classic "American Pie" by Don McClean.