No. 1 Minnetonka and No. 2 Wayzata play to another OT tie 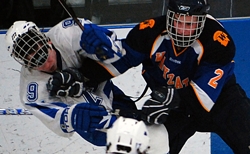 No. 2-ranked (Class AA) Wayzata had just knocked off No. 1 Minnetonka in overtime in front of a packed-to-the-rafters Pagel Ice Arena crowd to …

Wayzata’s Klein hadn’t unlaced his skates and already he was asking to see video of the Trojans’ 3-3 tie with the Skippers on Thursday, Feb. 18. And you can be sure he wasn’t interested in replaying Minnetonka’s Senior Night festivities.

No, what Klein is interested in watching, frame by frame, is his shot in overtime that hit Kruger, hit the crossbar, bounced to the ice and …

Well from there, no one is quite sure what happened. Klein believes the puck was over the goal line, but he can’t say with certainty. All Kruger knows is the puck deflected off of someone or something, rolled up his shoulder and then bounced to the ice.

“And the next thing I saw as I looked back was the puck was rolling out,” Kruger said. “(Wayzata players) were acting like they scored, so at first I was bummed.

So what really happened?

“(Klein) just asked me if we had any video of it and we do,” Wayzata coach Carl Davis said. “But I’m not sure we’ll even ever know.” 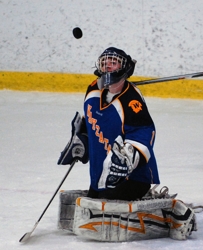 What we can say with assuredness is that Minnetonka and Wayzata are so evenly matched they could play 10 more times and all 10 could end in overtime ties. For now, though, they have played just twice. In the first meeting, the game ended in a 1-1 deadlock. In the rematch, neither team led by more than one and it took a goal from sophomore Mario Lucia with 49.1 seconds left to force the overtime.

“That’s as big a goal as we’ve had all season,” Davis said.

With so much at stake, so little was settled. At least on the ice. The teams could very well meet a third time in the Section 6AA playoffs, but in the meantime they go their separate ways. Minnetonka will likely remain No. 1 in the state Class AA rankings, while Wayzata can wrap up the Classic Lake Conference title on Saturday with a win over Hopkins.

Perhaps most importantly, the Skippers likely will emerge from the Section 6AA seeding meeting on Sunday as the No. 1. That’s important because defending state champion Eden Prairie is a lock to get the No. 3 seed, and the Eagles are the type of team that is best to be avoided in the playoffs.

“You know what, one seed, two seed, three seed or four seed, you’re going to have to play two very good teams to go to the state tournament,” Minnetonka coach Brian Urick said. “It’s nice to get the (No. 1 seed) because you get the last line change, but hey, pick your poison. If it’s (Benilde-St. Margaret’s) Eden Prairie or Wayzata, I don’t want to play any of them to be honest with you.”

Clearly, not much separattes the Skippers and Trojans. For one bizarre moment on Thursday, the teams stopped playing even though the whistle hadn’t blown. Klein thought he had scored his second goal of the night; Krueger thought the game was over. Turns out they both were wrong.

“I’m not sure what happened there,” Kruger said, “but I’d say it was a good bounce for us there. I went from pretty bummed to pretty stoked I made that save.”

“That save” was a reference to Kruger, after realizing the game was, indeed, still being played, managing to throw his right leg in front of a shot ticketed for a lower corner. Wayzata had the better chances in overtime (Krueger also made a clutch save on the Trjoans’ Bryan Tabery) but couldn’t secure the win in a game eerily similar to the teams’ first meeting.

“It’s interesting that the same situation happened against Minnetonka in both games where it appeared that we had scored and yet we weren’t given credit for it,” Davis said with a shrug. “You’ve just got to control the things you can control.” 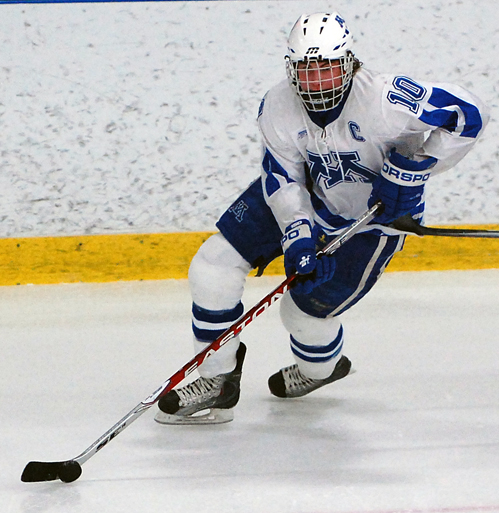 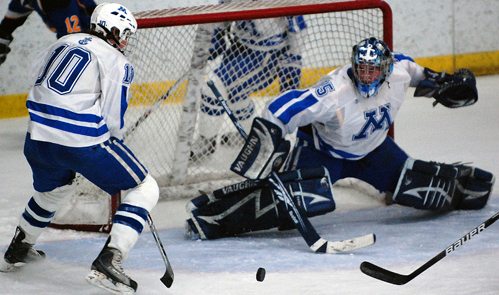 1. Erik Baskin, Minnetonka
Big, skilled sophomore showed some serious grit and resolve by scoring two goals from the crease area, both of which required him to whack at the puck several times in jackhammer fashion before eventually jamming it into the net.

2. Mario Lucia, Wayzata
Sophomore scored the biggest goal of his career and the Trojans' season to date when he tied the score at 3 with 49.1 seconds left in regulation.

3. Jim Kruger, Minnetonka
On Senior Night, the Skippers' senior salvaged the tie by making several clutch saves in OT, including one on a stunning recovery after it appeared the Trojans' had scored.

Pace picks up
Wayzata had 16 shots and Minnetonka 12 in a hectic -- but scoreless -- second period that saw both teams apply heavy pressure in crowd-roaring flurries. The Skippers' Max Gardiner put on a stickhandling clinic during stretches of the second, manuevering around the Wayzata defense for several good scoring chances.

Defense goes down
On Wayzata's first-period goal, Minnetonka defenseman Justin Holl stumbled and fell at center ice, allowing the Trojans' Bryan Tabery and Scott Holm to race into the Skippers' zone on a 2-on-1. When Minnetonka's Andrew Prochnow went down to the ice to block Tabery from shooting, the junior calmly slid a perfect pass to Holm, who rifled a one-timer into an open net.

Skippers respond
Minnetonka played better and better as the first period rolled along and eventually tied the score during a goalmouth scramble. Sophomore Erik Baskin was among the Skippers whacking at the puck, and it looked like he finally connected even though the goal was officially credited to Thomas Schutt.

Playing for everything
Not only were Minnetonka and Wayzata playing for what will assuredly be the No. 1 spot in next week's Class AA rankings, but the Classic Lake Conference title and all-important No. 1 seed in Section 6AA also were up for grabs. And, oh yeah, it was the Skippers' Senior Night.

Packed house
At 5:30 p.m., 90 minutes before the scheduled start of the varsity game between No. 1 Minnetonka and No. 2 Wayzata, the junior varsity game was in the opening period, there were plenty of openings in the Pagel Ice Arena bleachers and there was a decent selection of parking spots in the various nearby Minnetonka High parking lots. In a span of 30 minutes, all of that changed. By 6 p.m., parking spaces were sparse and the bleachers were full long before the JV game ended.

JV thriller
In an exciting prelude to the varsity game, Wayzata won the junior varsity game 3-2 in overtime, the winner coming on a goalmouth scramble.