Elk River runs through it 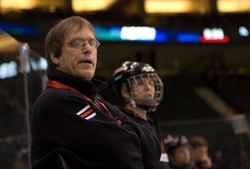 Section 7AA could be one of the most hotly contested sections in the state, as nearly any of the top seeds could make a bid with a good stretch of hockey. From top-seeded Elk River all the way down to No. 8 Cloquet/Esko/Carlton, one-goal games between these teams have been the norm rather than the exception.

The Elks (14-7-3) nabbed the top seed courtesy of its sweep of four section games, two against Northwest Suburban Conference rival Andover and one-goal wins over Duluth East and Grand Rapids. Elk River boasts of one of the top overlooked goal-scorers in the state in Ben Jaremko, who has netted 34 goals, and ace goaltender Anders Franke, who has played every minute of the season between the pipes. But do the Elks have enough depth to avoid being upset?

Outside of Jaremko and Chad Hennum (16 goals), who have tallied half of the team’s 101 goals, there may not be enough scoring should a team neutralize that top line. Franke is also an outstanding netminder, but his backups have no experience should they be needed.

Duluth East (15-5-4) is the No. 2 seed and has historically been the bully of Section 7AA, winning 10 of the past 16 titles. The Greyhounds again have a strong club, and they have played in plenty of tight-checking games against their section rivals. Since the turn of the year, East has won one-goal games against Cloquet (4-3), Forest Lake (2-1) and Grand Rapids (5-4), tied Andover (2-2) and lost a one-goal game to Elk River (3-2). That’s how even this section could be.

The Greyhounds usually win with strong defense and goaltending, although much of last year’s defensive corps and All-State goaltender Matt Cooper have all departed from last year's state tournament team. It’s time to count on players like junior defenseman Andy Welinski, a UM-Duluth recruit, and junior goaltender Jo Jo Jeannetta.

Fourth-seeded Forest Lake (17-6-2) is one of the dark horse contenders after tying for the Suburban East Conference title. The Rangers are hot, winning six straight games, and they are very stingy defensively. Goaltenders Christian Gaffy and Paige Skoog have combined to allow only 2.08 goals per game. Harvard-bound defenseman Dan Fick’s on-ice intensity is playoff-caliber at all times. 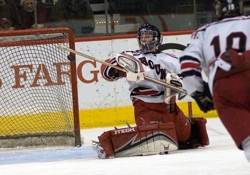 Section 7AA has a terrific group of scorers that will make nearly every game fun to watch. Starting with St. Francis sniper Joey Benik and his record-setting career, high-powered top lines are the norm for most teams. Benik has racked up another 53 goals through the regular season and along with junior teammate T.J. Belisle, makes a dangerous top group despite the Saints’ No. 6 seed. The same can be said for big Jack McFarlane and No. 8 Cloquet.

Among the higher seeds, the Andover pair of Cal Decowski and Taylor Portner has combined for 54 goals and 130 points. Forest Lake is young up front, with super sophomores Lucas Kohls and C.J. Franklin leading the scoring race. Grand Rapids sophomore Patrick Moore and Duluth East sophomore Jake Randolph also lead their teams in scoring and join the talented kiddie corps that may very well decide the section race.

All that firepower should make it tough in the defensive zone, but 7AA has top defensemen and goaltenders who can stand up to the assault. Forest Lake is led by Harvard-bound defenseman Dan Fick and his slick-skating, full-ice game. Duluth East’s Andy Welinski, Grand Rapids’ A.J. Merritt and Elk River’s Ryan Jaremko are all defensemen who can both contribute in the defensive and offensive zones.

Between the pipes, Elk River’s Anders Franke and Andover’s Matt Ray have the most experience of any goaltenders after leading their teams the past two seasons (more in Ray’s case). They should be calm and collected, a trait Duluth East’s Jo Jo Jeannetta has developed this winter, pleasing coach Mike Randolph, who will lean heavily on him. 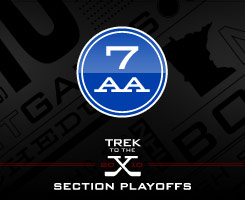 Mike Randolph and his Greyhounds know how to succeed in the playoffs, using strong defense and goaltending to grind through low-scoring games on the way to the X. East has won this section more often in the last 16 years (10 times) than the rest of the schools combined and that history should hold again this winter in a tough rematch of last year’s section final against Elk River.

The Thunderhawks won’t be favored in any of their games, but it wouldn’t be wise to overlook them. Their first-round foe, No. 4 Forest Lake, won by a single goal back in December in their only meeting, as did No. 1 Elk River, whom Grand Rapids would likely face in the semifinals. But the Thunderhawks are a different team since that Elk River loss, which dropped them to 2-6-1 on the season.