Loving every minute of it 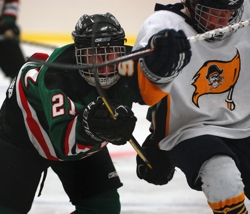 When Jake Useldinger looks back on his high school hockey career, there won’t be a lot of regrets.

Mature beyond his teen-age years, Useldinger professes a deep appreciation for representing his hockey-mad hometown of East Grand Forks, for tugging on that distinctive EGF jersey, for all the great Green Wave players who have come before him.

“It’s just awesome to come out and play for your hometown,” Useldinger said. “It’s been a wild ride all the way through. It’s something I’ll never forget.”

One of the highlights of Useldinger’s senior season came on Jan. 28, when he was honored before the Green Wave’s game against Grand Forks Red River (N.D.) for setting the school’s career scoring record.

None other than Jason Bies, the previous record holder with 159 points during a career that ended in 1989, handed Useldinger a plaque to commemorate the achievement.

“That was emotional,” Useldinger said. “I actually had no idea it was going to happen. Jason Bies was in the penalty box and he just stepped out onto the rink.

“The announcer started talking about it, and I was like, ‘Oh, geez.’ It was pretty awesome. It was a good feeling to have.”

The good times continued during the game, as Useldinger scored a hat trick in the Green Wave's 3-2 victory. It has been that kind of season for Useldinger, who has registered 25 goals, 52 points and zero off nights.

“He empties the tank each and every night,” East Grand Forks coach Cory Chupka said.

Useldinger has been relentless in his efforts to improve his game, seeking out instruction and tips from top-level coaches and players. He played in the Upper Midwest High School Elite League last fall and has been a regular at camps and clinics in northwestern Minnesota for years, first as a wide-eyed student and more recently as one of the instructors.

“He is from a farming family, and to be in farming nowadays or at anytime, you really have to have a work ethic,” said Scott Oliver, who coached Useldinger in the Elite League. “You always have to be accountable and producing. He turns around and applies those same values to the game of hockey.”

Next for Useldinger, whose career point total stands at 176, and the Green Wave is the Section 8A playoffs. East Grand Forks is seeded third and will host sixth-seeded Park Rapids on Friday, Feb. 26.

The Hockey Hub recently caught up with Useldinger, who talked about, among other topics, his hockey roots, walleye fishing and some recent dental work.

You’ve got a reputation as a relentless worker when it comes to improving your hockey skills. Where do you think that comes from?
I’ve just had a good work ethic my whole life, I guess. I’ve never really had anyone push me. I think it started out as a kid playing street hockey every day. Then in the winter my dad would build a rink in our backyard. I think that’s where I learned to just have fun. Then I wanted to get better. I knew I wasn’t going to go anywhere unless I worked my tail off.

What aspect of your game have you spent the most time on during the past few years?
Probably trying to be better on the defensive side of the puck. I’ve been able to score goals ever since I was really little. As you get older there are always people who can score goals, but you have to stop them, too. Doing the little things, winning face-offs, blocking shots and stuff like that. I’ve made the little things big things.

A lot of great players have come through East Grand Forks. What does it mean to know you are the Green Wave’s career scoring leader?
It’s an honor just to put on a Green Wave jersey. It’s been really fun the last four years. I’ve had the opportunity to play with a lot of great guys.

You played with and against most of the state’s best players this fall in the Upper Midwest High School Elite League. What was that experience like?
That was probably the funnest thing I’ve done in high school. I’ve met so many people I’ll have relationships with the rest of my life. I know that someday when I’m driving my kids around to games I’ll know someone pretty much everywhere in the state. The skill level in that league is just unreal.

You lost part of a front tooth in a game at Crookston. Did you ever get that fixed?
I got it fixed about a week later. I got teased for about a week straight in school and I decided I better get it fixed.

You were banged around quite a bit in that game. Do you normally take such a pounding?
That’s pretty normal. Ever since I’ve been playing in high school I’ve been one of those grinder players who will go in the corners. Players on other teams, they like to get after me and get physical. I’d rather have it that way, though.

What are your plans in regard to hockey after the high school season ends?
I’m probably going to go play juniors next year. I’ve got a few options but nothing is set in stone yet.

What do you like best about playing high school hockey?
I personally like playing at home more than anything. We get good crowds pretty much every game.

Do you have an interest or talent that most people might not know about?
Too many people probably wouldn’t know this, but I love fishing. I do that a lot in the summertime.

What is your most embarrassing hockey moment?
Probably one time in bantams. I lost the puck off my stick into the corner on a penalty shot. I didn’t even get a shot off.

Who is the best player you’ve ever been on the ice with?
Jay Genoway. He plays for the University of North Dakota. He’s probably the best. I coached with him at East Grand Forks at hockey camps in the summertime. Afterwards, he would work with me and give me some tips and show me different things.

What advice would you give young players just learning the game?
Work your butt off. Because it is only here for so long and don’t take it for granted because before you know it, it is going to be gone. You’ve got make some memories while you can. 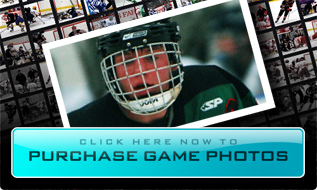 School: East Grand Forks
Year: Senior
Height: 5-foot-9
Weight: 165 pounds
Position: Center
College committment: None. Coaches from at least two WCHA teams reportedly have been keeping an eye on Useldinger, but he hasn't received any Division I scholarship offers. He is hoping to play juniors next season, most likely in the USHL or NAHL.
Credentials: A standout since his sophomore season, Useldinger is East Grand Forks' career scoring leader with 176 points. ... He was chosen to play in the Upper Midwest High School Elite League in the fall. ... Through Friday, Feb. 19, he had 27 goals and 52 points to rank among the state's top 30 in both categories. ... He has registered three hat tricks this season and has been held without a point in just four of 25 games. 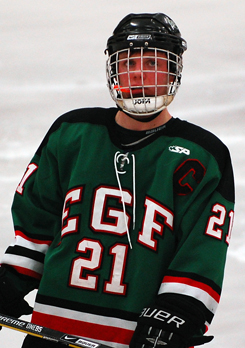 Favorite home-cooked meal?
This is going to sound weird but sloppy joes with nacho cheese