In several of the state's 16 section tournaments there are four, five and sometimes even six teams that have a legitimate chance of advancing to the state tournament.

This is not one of them.

Section 5A is all about Hermantown (22-3-0), which is ranked No. 3 in Class A, features a Mr. Hockey finalist in UM-Duluth recruit Adam Krause, boasts one of the state's top sophomores in defenseman Jared Kolquist and has two capable goaltenders in seniors Tiegen Brickson and Tyler Ampe.

If all of that doesn't sell you on Hermantown's chances to reach the Xcel Energy Center in St. Paul, consider that the Hawks beat the No. 3 seed and two-time defending section champion St. Cloud Cathedral 8-0 in mid-January.

All three of Hermantown's losses were to Class AA teams (Andover, Eden Prairie and Cloquet), but No. 2 seed Duluth Denfeld did push the Hawks to overtime before losing 5-4 on Feb. 9. With fabulous freshman Zach Thompson in goal, the Hunters can beat most any opponent on the right night. Denfeld, however, enters the playoffs having won just two of its final 11 games.

The section is filled out by several teams having outstanding seasons, at least by those program's standards. But none of the likes of Rogers, Sauk Rapids, North Branch and Moose Lake figures to have enough depth or firepower to derail Hermantown. 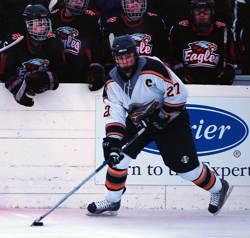 Hermantown's Krause, pictured at right, is as good as any player in the northern half of the state. His goal-scoring ability (he has 34 this season) combined with his exceptional size (6-foot-1, 175 pounds) and strength makes him almost impossible to shut down.

St. Cloud Cathedral has two outstanding forwards in Jordan Palusky and Alex Koopmeiners, both of whom were mainstays on last year's state tournament team. Those two have combined to score 30 of the at times offensively challenged Crusaders' 83 goals.

North Branch senior Jerrett Sachs had an amazing four four-goal games this season as he racked up 34 goals and 62 points. There's potential for a spectacular offensive display when the Vikings match up with Moose Lake for the third time this season in the first round, as the Rebels feature not only Finnish-born super scorer Ville Mattala (25 goals) but six other players with 10 or more goals.

This section isn't all about offense, as Duluth Denfeld's Thompson might very well be the best freshman in the state. His .925 save percentage ranks eighth in the state, and he's been in the top 10 in that category for most of the season despite the Hunters' extraordinarily difficult schedule. 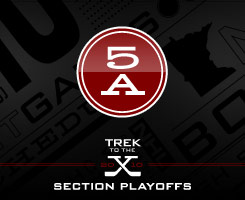 This could be the best Hawks' team in the program's history, which is a mouthful given that Hermantown won the state Class A title in 2007. If this veteran team (there are 14 seniors on the roster, led by Mr. Hockey finalist Adam Krause) doesn't advance to the state tournament it will be a major surprise.

We're not predicting the Rails will win the section title, but this is a team that stunned always-strong Duluth Marshall in mid-January and, earlier in the season, pushed another traditional Class A power, International Falls, to overtime before losing 4-3. Two-time defending section champion St. Cloud Cathedral, which is having a down season by its lofty standards, could be vulnerable for a quarterfinal upset should Proctor get past Pine City as expected in the first round.