All eyes on No. 1 Faribault

Section 1A preview: Albert Lea among several teams aiming to bring down Falcons 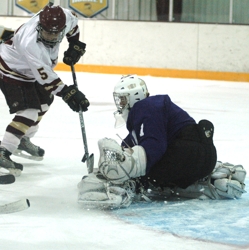 It has been a dream season so far for Faribault, which borrowed an old football play by doing the Gatorade-bucket shower thing after the Falcons routed Rochester Mayo 8-0 on Feb. 18 to clinch the school's first Big 9 Conference title.

The Falcons (19-6-0), who closed the season on a 12-2-0 tear, hope the fun is just beginning. They are the top seed among a befuddling group of Section 1A teams.

Hot as they are, the Falcons are hardly a lock to win this tournament, considering the two losses they suffered during their season-ending run came against two of their fiercest section rivals: No. 2 seed Rochester Lourdes (14-8-3) and No. 4 Albert Lea (12-11-1).

Lourdes, the defending section champion, suffered some early season bumps and bruises, but gave Twin Cities powerhouses St. Thomas Academy and Breck, the state's No. 1- and 2-ranked Class A teams all season, tough games before losing both late in the season.

Like the rest of the top teams in the section, Albert Lea has been playing its best down the stretch. Veteran coach Roy Nystrom, one of the nation's winngest high school boys hockey coaches, is as crafty as they come, making the Tigers even more dangerous.

Further muddying the picture is No. 3 seed New Prague (16-7-2), which lost just twice in its final nine games and is one of the few top section teams that hasn't spent the season rotating its goaltenders.

And don't discount No. 5 seed Red Wing (12-3-0). The traditionally tough Wingers will be well-prepared for the rigors of the playoffs thaks to a rugged schedule that includes wins over Rochester Lourdes and New Prague. 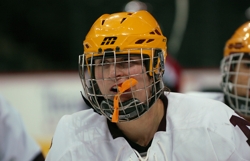 Faribault senior forward Bo Putrah is equally capable as a goal-scorer or playmaker, as evidenced by his 25 goals and 27 assists. His offensive skills have been a huge part of the Falcons' success.

Just as big of an offensive cog, however, is senior defenseman George Richie, who shifts to forward when Faribault is on the power play or killing penalties. Richie has a whoping 48 points (22 goals, 26 assists) and has been held without a point just twice all season.

If you are into big point totals, look no further than Mankato East's Taylor Ries, a senior who has 31 goals and 27 assists. Linemate Dan Billar isn't far behind with 52 points on a Cougars team that averages 4.62 goals per game (but allows 4.75).

Some of the section's best talent is barely beyond bantam age. Freshman Alex Funk is Rochester Lourdes' top goal scorer with 13. Northfield's Andrew Scofield, another freshman (pictured above), has 28 points (17 goals, 11 assists) to lead the Raiders.

Red Wing's Jake Oborsky, a sophomore, fits in with the rest of the Section 1A kiddie corps with his 21 goals and 17 assists.

In a section where several of the top teams (Faribault, Rochester Lourdes and Albert Lea) have rotatated goaltenders with mixed results, New Prague has given the bulk of the work to Joe Morris. He's put up good numbers (2.13 goals-against averge, .912 save percentage) and could give the Trojans the edge in a tight game. 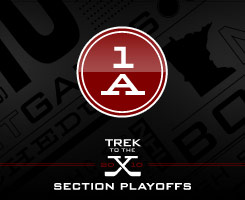 What's the line about past performance predicting future success? Well, we like the Falcons' most immediate past performances. Since suffering back-to-back losses to section rivals Albert Lea and Rochester Lourdes in late January, the Falcons have reeled off seven straight victories to close the season. Three of those wins were by shutout, and goaltending will ultimately determine whether Faribault plays into mid March.

Yes, we're sending mixed messages here. But, hey, this might be the toughest section in the state to handicap. Top-seeded Faribault is our favorite to advance, but it wouldn't be shocking to see No. 4 seed Albert Lea pull off a semifinal upset (assuming the Tigers can get past Red Wing) over the Falcons. The Tigers beat Faribault 6-4 on Jan. 28 in the teams' only meeting this season.