Warroad and TRF: Two to tango?

Section 8A preview: Mariucci rivals are aiming for rematch 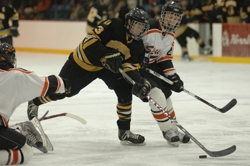 Top-seeded Warroad (21-4-0) has had a stranglehold on Section 8A for almost a decade, winning six of the past seven section titles and getting the No. 1 seed again this year. But while the Warriors continue to churn out top players, their depth might be their Achilles’ heel.

No one argues the firepower of the their top forwards, players such as North Dakota-bound Brock Nelson and linemate Brett Hebel, or the all-around play of All-State defenseman Carson Gray. But does Warroad have enough beyond those top stars to make another run to the X? If the regular season is any indication, it could be a harrowing race.

Warroad has had a consistent pattern this year, winning between three and five games in a row before suffering a setback. It’s happened four times already – and the Warriors enter the playoffs on a season-long five-game winning streak. Coach Albert Hasbargen also has a decision to make in goal, where regular starter Shawn Storey hasn’t played since Jan. 26 because of a knee injury. Is he ready to go? Or will it be sophomore Andy Foster again?

You get the idea.

That’s not to say another program couldn’t pull off a shocker.

Third-seeded East Grand Forks (11-13-1) has defeated Warroad and tied Thief River Falls this season, while No. 7 Crookston (7-15-3) upset Thief River Falls. Sixth-seeded Park Rapids (16-7-2) has offensive power and is the Mid-State Conference champion, while No. 5 Lake of the Woods (12-12-1) has a goaltender who can steal a few games in Alex Lyon. And don’t count out Craig Lindegard and No. 4 Kittson Central (16-6-0), the Northwest Conference champions. 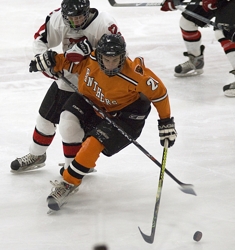 Goaltending could be an interesting factor in the Section 8A race. Top-seeded Warroad has been without regular Shawn Storey since he injured his knee Jan. 26 against Crookston. Expected to be out 2-3 weeks, it’s been over that time now since he last was between the pipes. In his absence, sophomore Andy Foster has won seven of eight games. There’s no goaltending dilemma for No. 2 Thief River Falls, which is anchored by the state’s Brimsek Award winner, Zane Gothberg.

Gothberg gets plenty of help from All-State defenseman Jacob Malwitz and crew. Malwitz isn’t a big offensive factor, but he solidifies a defense that is allowing just 1.96 goals per game. Offense from the blue line is more the forte of Warroad’s Carson Gray, Red Lake Falls’ Garrett Schmitz and Park Rapids’ Kevin McMorrow.

Many of Class A’s top-scoring forwards are also plying their skills in the Northwest corner of the state, from Warroad’s Brock Nelson and Brett Hebel to Kittson Central’s Craig Lindegard, East Grand Forks’ Jake Useldinger and the brother duo of Sam Coburn and Tucker Coburn in Park Rapids. 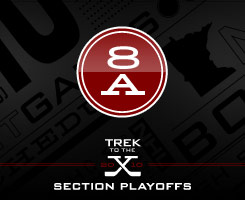 Talk to coaches about what’s most important entering the playoffs and they’ll mention two things – hot goaltending and a strong defense – and both are strengths of the Prowlers. Thief River Falls hasn’t allowed more than three goals in a game in almost a month. If the Prowlers can get enough offensive output, they should break the three-year reign of Warroad – and finally exorcise their demons.

The seventh-seeded Pirates haven’t had many victories to brag about, but one in particular stands out. Back on Feb. 4, Crookston upset Thief River Falls 1-0 with goalie Nick Biermaier stopping all 30 shots. Assuming the Pirates get through the play-in game against winless Walker-Hackensack-Akeley, their quarterfinal match-up is against the second-seeded Prowlers.