Four for the X 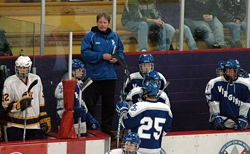 Let’s be brutally honest. No one outside the top four seeds in Section 7A really has a shot at the state tournament. It’s not that there isn’t some good hockey from fifth-seeded Duluth Central on down, it’s just that the top four seeds are that powerful.

It’s an odd situation, in that this has traditionally been one of the most wide-open sections in the state. In the last 16 years, eight different teams have won the title and no one has more than three (International Falls and Hibbing).

Last year, Virginia/MIB (15-7-3) qualified for state for the second time in school history with a young team. Coach Keith Hendrickson played as many as 10 sophomores, which certainly made the Blue Devils the early favorite again this winter. They’ve made that prediction stand by earning the No. 1 seed entering the tournament.

After being very top-heavy in scoring a year ago, the now-experienced juniors have spread out the scoring load, which should bode well in the playoffs. Junior Garrett Hendrickson, the coach’s son and a St. Cloud State recruit, is the undisputed leader of the Blue Devils, but a dozen players have double-digit points and/or at least five goals.

The Broncos are hoping a season-ending 5-1 victory over Fort Frances, Ont., cured their goal-scoring woes. In each of the previous two games, International Falls was shut out by Grand Rapids and Roseau. To get their offense going, the Broncos will likely get support from sparkplug defenseman Willie Corrin.

Hibbing/Chisholm has been up and down much of the season, alternating a handful of good victories with tough losses. Ryan Johnson is the second-most accomplished goal-scorer in the section, netting 36 regular season tallies (Greenway’s Adam Mendoza had 39). Goaltender Nathan Tromp is also the most experienced of any of the top netminders.

That’s been the story for No. 4 Duluth Marshall (12-12-1) all season, as well, as the Hilltoppers had arguably the toughest schedule among any of the Section 7A contenders. They endured a six-game losing streak in early January, but that included losses to No. 1A St. Thomas Academy and No. 3A Hermantown.

No. 5 Duluth Central (15-9-1) is the best of the rest, but likely won’t be a factor in its final season as a varsity program. After this year, Central will close as Duluth contracts to just two public schools (East and Denfeld). 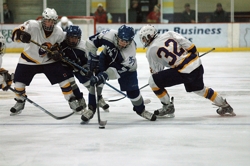 Goaltending could play a big factor in Section 7A, as two of the top four contenders regular rotate netminders (Virginia with Casey Myhre and Andy Milbridge and International Falls with Glenn Walls and Mike Hart) and the other two lean heavily on their starters (Hibbing with Nathan Tromp and Duluth Marshall with Max Elstad). So is it better to have “the guy” in nets, or to go with the hot hand? We’ll find out over the next two weeks.

Because all four will be tested by strong scorers.

Hibbing’s Ryan Johnson hasn’t received much notice statewide, but he has seven hat-tricks this season and is scoring exactly 36 percent of the Bluejackets goals. Greenway’s Adam Mendoza is even more of a one-man scoring show, with 39 of the Raiders’ 88 goals. Virginia’s Garrett Hendrickson is the most decorated of the top scorers and has committed to St. Cloud State, but he was hobbled by injury in the final weeks of the season. At full strength, he can single-handedly take over games for the Blue Devils.

International Falls’ Willie Corrin will be a big factor on the blue line. The All-Stater is the Broncos’ second-leading scorer and is dangerous offensively. 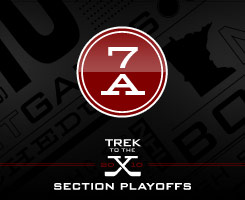 This could be a harrowing tournament run for the Blue Devils, who have had quite a battle with the other top seeds in Section 7A. But Virginia has much more balance than last year and that should be enough to push the Blue Devils over the top. It would help if they get a hot goaltending effort from either Casey Myhre or Andy Milbridge, who have split time all season.

There is every indication that No. 4 Duluth Marshall has as good a chance as any of the other top seeds to get to state, despite a mediocre record. Coach Brendan Flaherty challenged his team with a difficult schedule, which could pay off in the playoffs.