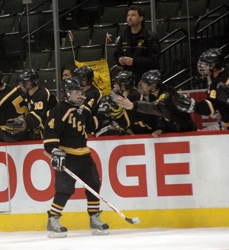 Section 3A isn’t the bracket to be sitting in the favorite’s role. At least, not if you want to make it to state.

In each of the last two seasons, the top seed has been upset en route to the X. This winter, No. 1 Hutchinson (10-13-1) hopes to reverse that trend. The Tigers are the defending section champions and lost in the state consolation finals last year. But they ended this regular season on a three-game losing streak and have had trouble scoring goals all year. Other than leading scorer Michael Hantge, no other Tiger has double-digit goals. As a team, the Tigers score just 2.79 goals per game.

Goaltender Zak Swenson was a key factor in Hutch’s run to state last year and has the experience to do so again. But he’s coming off an uneven regular season and will need to regain some of last year’s magic.

Speaking of regaining magic, No. 2 Redwood Valley (17-5-1) isn’t entering the playoffs on a hot streak, either. The Cardinals have gone 0-3-1 in their past four games, coming off a 16-game winning streak from Dec. 5 to Feb. 6. The Southwest Conference champions have a senior-dominated lineup, although top scorers Eric Miller and Eric Hanson are juniors.

No. 3 New Ulm (13-9-1) has been the most snake-bitten program in the section, as it’s been the top seed each of the past two years that’s been knocked from its perch. Three years in a row, the Eagles have been to the section finals, only to fall short each time. Coach Erik Setterholm’s team isn’t expected to get that far again, especially after the graduation of sniper Kyle Reinarts, but perhaps the upset potential in 3A could be to its advantage this time.

The most interesting first-round match-up has to be between No. 4 Litchfield/Dassel-Cokato (14-9-1) and No. 5 Marshall (13-12-0). The Dragons likely got the higher seed and home game courtesy of its 5-2 head-to-head victory back on Jan. 9. 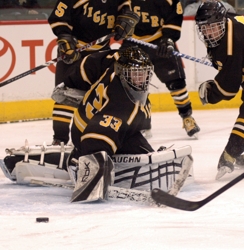 Redwood Valley’s junior Erics (Miller and Hanson) will lead the way for the Cardinals, as they’ve combined for 38 goals and 79 points. Miller is a very crafty player with a knack for being in the right place, while Hanson is a tough grinder and forechecker. Together, they have plenty of chemistry as they’ve played varsity together since their freshman year. But coach Steve Pacheco believes the true key will be the play of senior goaltender John Rebstock and his defensive corps.

It’s the same formula that lead to Hutchinson’s state bid last year behind goaltender Zak Swenson (pictured at right) and the same a few other teams hope to use: New Ulm and Blake Burgau and Marshall and Mitch Campion.

Another strong scoring duo that could make noise is from Windom Area with brothers Nick and Adam Eisenmenger. Along with Hunter Johnson, they’re a dangerous trio for any of the top seeds. Their scoring numbers are down from last winter, however.

Litchfield/Dassel-Cokato’s Nate Adams is the top goal-scorer in the section with 24. 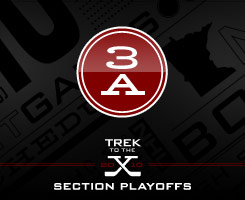 Perhaps it’s only fitting that we give the Eagles the nod as the section champion. After all, they’ve lost three straight section finals in agonizing fashion. Now that they’re no longer the top seed, the pressure is off. New Ulm has an experienced goaltender in Blake Burgau and good scoring in Zach Fisher, Kaleb Juntunen and Brody Peterson.

Any team that can throw the speed and size of scorers such as Hunter Johnson and the Eisenmenger brothers (Nick and Adam) can be a threat. And the Eagles have a victory over No. 2 Redwood Valley on their ledger, a 3-2 decision back in the season-opener. But as the sixth-seed, it won’t be easy in the opener against No. 3 New Ulm.