A history of passion 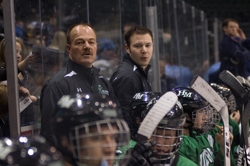 Section 4AA has only been an Eastern suburban section for the past two years, but this same group of schools has plenty of past history when they were all in Section 3AA (and old Section 3) together.

Hill-Murray has claimed four straight state tournament berths, the first three times by beating rival White Bear Lake in the finals. Those two schools have dominated their section over the years, combining for 27 of the last 28 titles (only Centennial’s 2003 state champion out of Section 3AA breaks that streak). Pages could be written about the passionate rivalry between Hill-Murray and White Bear Lake.

At first glance, it doesn’t appear much will change this winter.

The Pioneers are one of the stingiest defensive teams in the state, allowing just 1.68 goals per game. It isn’t a surprise, with a tough defensive corps that includes UMD-bound Chris Casto, J.D. Cotroneo and Jordan Johnson. But they can also score, as seven different players have double-digit goals, led by Willie Faust’s 20.

White Bear Lake (15-9-1) is right there in its familiar position as the No. 2 seed and likely foe to Hill-Murray in the section finals. The Bears haven’t had as strong a season as in past years, but are still dangerous. And the future looks bright, as three of the top four scorers are juniors (Brandon Wahlin, Max Birkinbine and Mac Jansen).

The two bitter rivals played twice this year, with Hill-Murray taking both. The Pioneers shut down the Bears 5-0 on Dec. 15, but had more trouble with them two weeks later in the Schwan Cup, winning just 4-3.

Selecting anyone but those two to represent Section 4AA would be fighting against a long trend, but it isn’t impossible to have a break through from any of the next four teams in the seedings.

No. 4 Tartan (15-9-1) hopes to atone for last year’s section shocker with a deep run. The Titans were a surprise No. 1 seed in the section last winter, but were upset by No. 8 St. Paul Johnson in the quarterfinals. They certainly won’t overlook No. 5 Mounds View (11-12-2). 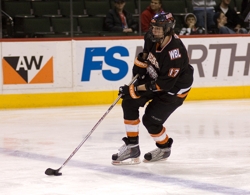 Hill-Murray’s defensive corps includes Chris Casto, Jordan Johnson and J.D. Cotroneo is the strongest unit in the section and one expected to lead the Pioneers to the X again. Castro, a University of Minnesota-Duluth recruit, and Johnson both are rugged defenders who can add an offensive element. Castro scored a career-best 11 goals this winter and has a tremendous work ethic. Johnson is an excellent skater, while Cotroneo is hard-nosed and comes from good hockey bloodlines. Add in young Kevin Schulze and crew and the Pioneers defense will be tough to dent.

In goal, Tim Shaughnessy of Hill-Murray has the experience of leading his team to the state tournament, something the other contenders haven’t had. Of course, they also don’t have the same defensive corps, either. 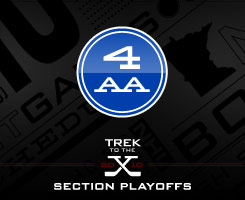 The Pioneers are looking for a fifth straight section title and are prohibitive favorites to do so. Coach Bill Lechner’s team has terrific balance on its forward lines and a stout defensive corps that will make it difficult to beat. Picking the Pioneers to beat White Bear Lake in the finals again this winter isn’t exactly going out on a limb.

The Polars may have some bad losses on their schedule, but they also have more than a few “moral victories,” losing one-goal games to state-ranked Mahtomedi, St. Thomas Academy and Hill-Murray -- all in the past month. Joe Rubbelke, Nick Hinz and Zac McCarver aren’t a bad trio to build an upset pick around, either.