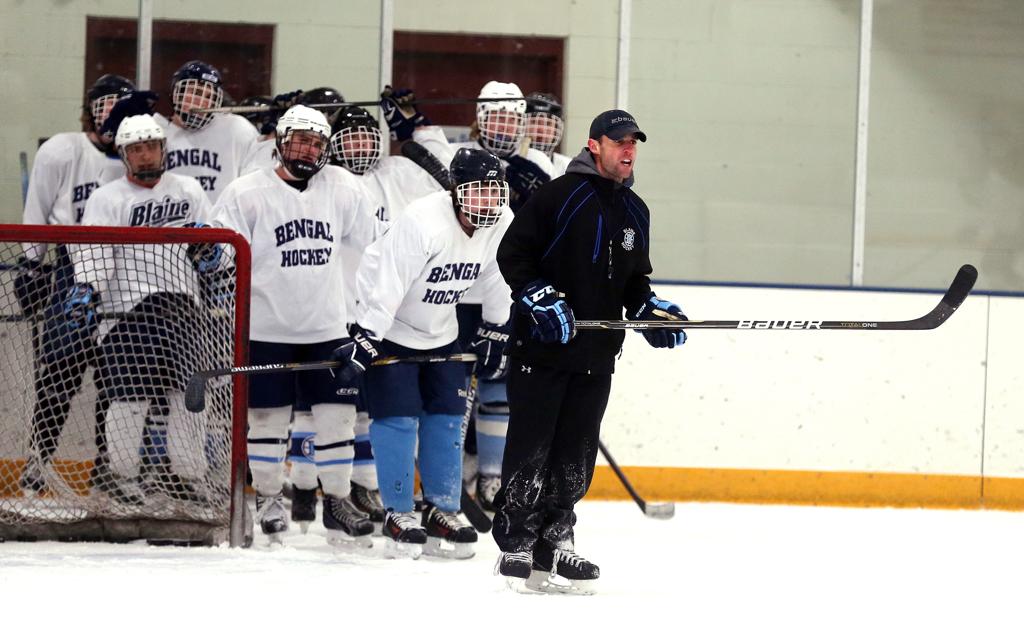 Replacing Dave Aus after 14 years, a run highlighted by six consecutive Class 2A tournament appearances, Carroll said he believes keeping the program at a high level is as much about attitude as ability.

Devotion is Carroll’s word, inspired by battles with his younger brother, Andrew.

“Everything we did growing up, we would compete,” said Carroll, 33. “I could kick the daylights out of him, but if anybody else did anything to him, I was there. When you’re devoted to one another, there’s an intensity that’s created from it. That’s a cool thing to have. That’s when fun stuff happens. That’s when banners are hung and trips to the Xcel Energy Center are made.”

Once a fixture at the state tournament in St. Paul, Blaine has endured a three-season drought. Last season, the team achieved the first No. 1 rank of Aus’s tenure. But the Bengals, featuring 15 seniors, were upset in the section finals.

“I like Dave and Dave was fun but I wasn’t upset or anything when Chris came in,” said junior Luke Notermann, a top-nine forward last season. “I’m just excited to see what he can do.”

“It took me a little time to get over it,” Tufte said. ”But once I heard Chris was our coach, it was a quick transition.”

Carroll and Blaine players knew each other from the weight room. Carroll, who played forward at Roseville High School and Bethel University, ran the Bengals’ summer strength and conditioning program for about the past seven years at Fogerty Arena. In the winter, Carroll helped coach at Bethel. Now Blaine players are getting to know Carroll in a different role.

Working with Carroll on the ice through the summer, plus last week’s varsity tryouts and scrimmages, gave players an introduction to his coaching style. Several noted Carroll’s intensity.

Senior Jesse Slawson said: “If he’s thinking things, he’s not afraid to tell you if you’re doing something bad or something right. He’s very hands-on.”

Carroll, whom Aus endorsed as his replacement, tweaked forecheck schemes and defensive zone coverages but said he is “pushing more character-type stuff.”

“I’m certainly not going to come in and overhaul it,” Carroll said. “But there are certainly some things that I bring that right, wrong or otherwise are just different. Hopefully that creates some excitement and brings attention to some areas.”

Carroll invited players to his house for a summer meeting to discuss their goals. The new coach found players ready to work hard to make a transitional year a successful one.

“He’s going to get us more mentality tough,” Slawson said. “We keep talking about things like, ‘If we’re going to make it to state, we’re going to need good legs throughout the season. We need to be a good third-period team.’ We’re thinking about the future, definitely.