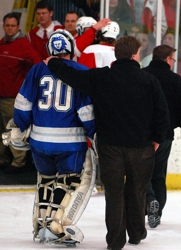 The Hopkins goaltender had gone through the postgame handshake line, taken a heartfelt pat on the shoulder from his coach and even went out of his way to shake hands with the officials.

Finally, he skated slowly toward the St. Louis Park Recreation Center’s swinging rink side doors and, beyond that, the rubberized runway that leads to the locker rooms, realizing all too well the moment he stepped off the ice his high school career was over.

“It’s hard to lose a game, and it’s hard to be done, too,” an emotional Fons said.

In a wildly unpredictable Section 6AA quarterfinal that had more twists and turns than a plate of spaghetti, No. 4 Benilde-St. Margaret’s rallied from a three-goal second-period deficit, then a two-goal third-period deficit to beat the No. 5 Royals 6-5 on Thursday, Feb. 25 on a goal by Christian Horn with 29 seconds left.

The Red Knights unloaded 58 shots on Fons, including a Gattling gun-style 32 in the third period when, given the mountain of rubber he was being hit with, Fons wasn’t so much a goaltender as he was the Michelin Man.

“He’s great,” Hopkins coach Chad Nyberg said. “He’s a great goalie. He did everything we certainly could have asked from him to keep us in it.”

A goalie who gives up six goals is one of the game’s biggest stars? 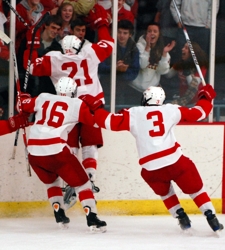 Yeah, well, you would have had to see this game to believe it. Even then, some of Fons’ third-period saves had fans looking at each other in amazement and wondering what had just happened.

There is no short way to describe the play of Fons, the game’s wild swings of momentum, the sheer insanity of it all unless you are Benilde-St. Margaret’s coach Ken Pauly, who summed it up thusly, “I went to a hockey game and a track meet broke out.”

What was expected goaltender’s duel between Fons and the Red Knights’ Jacob Meyers instead turned into a score-a-thon.

“To say it was a goaltender’s battle, when it was 6-5 with two of the best in the state, I guess that went out the window,” Nyberg said.

Beyond the 11 goals there were pucks clanging off crossbars and goalposts, near misses for both teams that only added to the excitement.

“He was unbelievable,” Benilde-St. Margaret’s freshman Grant Besse, who registered a hat trick, said about Fons. “We had so many chances and he made so many big saves. We didn’t know if we were going to pop that last one in.”

On the winner, Horn, a sophomore, took a pass from linemate Pat Steinhauser and fired a shot that found an opening through Fons’ legs.

“It was a great goal, it was a great game to play in ,” Horn said. “We were pretty confident we were going to come back and win this one, even if it had to be in overtime.”

The Red Knights advance to play Minnetonka at 3:30 p.m. on Saturday in a section semifinal game at the Bloomington Ice Garden. 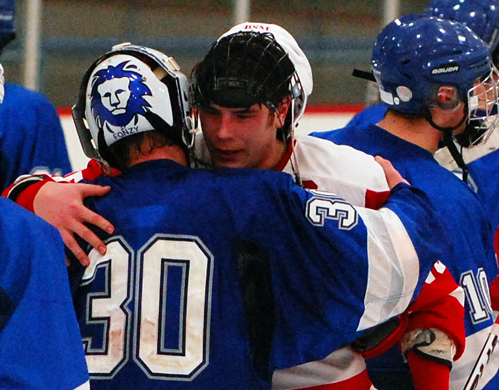 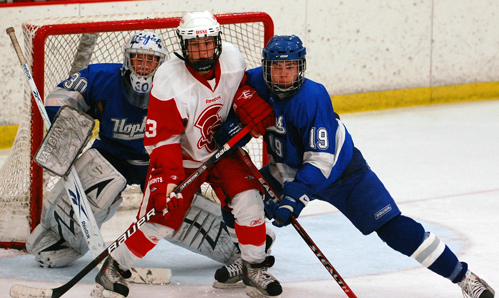 1. Christian Horn, B-SM
Sophomore (pictured below) showed good patience when he held the puck and calmly scored the game winner on a rush with 29 seconds left, allowing the Red Knights to avoid sudden-death overtime and sneak past the upset-minded Royals.

2. Alex Fons, Hopkins
It's not often a goalie who allows six goals finds himself among the three stars, but the Royals senior was brilliant in the third period when Benilde-St. Margaret's unloaded an unending barrage of shots. He finished with 52 saves and couldn't be faulted on any of the Red Knights' goals.

3. Grant Besse, B-SM
Playing in his first high school playoff game, Red Knights freshman merely scored three goals, the biggest of which came 26 seconds into the third period and pulled the Red Knights to within 5-4. 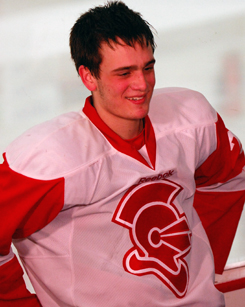 Super start
Benilde-St. Margaret's, which has spent much of the season ranked in the state's top 10 in Class AA, got the No. 4 seed in loaded Section 6AA and figured to have a significant speed and skill advantage over No. 5 Hopkins. However, it was the Royals who dominated the opening period, scoring on a power play, a close-range rebound and a crowd-hushing (the B-SM side of the stands, anyway) breakaway by Kyle Dalton. The few good scoring chances generated by the Red Knights were smothered by Hopkins goaltender Alex Fons.

Wild and whacky
Benilde-St. Margaret's scored three goals in the opening 7 minutes, 33 seconds of the second period and appeared to be well on its way to taking control. Then, just as suddenly, Hopkins scored twice to end the period with a 5-3 lead.

Surprising shootout
Both starting goaltenders, Hopkins' Alex Fons and Benilde-St. Margaret's Jacob Meyers, are seniors who played in the Upper Midwest High School Elite League in the fall and serve as captains of their teams. They are undoubtedly two of the best at their position in the state. So it figured that their matchup might end in a 1-0 or, if things got really out of hand, a 2-1 final. By the middle of the second period any notion of a goaltender's duel had been blown up, as six goals had been scored (three for each team).