Section 2AA semifinals: Hornets back in top form in win over Holy Angels 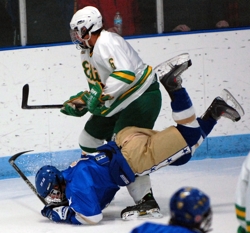 Reaching a section final is nothing new for a program that has made 25 state tournament appearances.

This year, though, the Hornets skated a strange and character-testing regular-season path, having lived to tell the tale of a of January-long spiral that had their season perilously close to ending in an unceremonious heap of rubble.

Instead of crashing and burning, Edina is headed to the Target Center after a thrilling 3-2 triumph over Holy Angels on Saturday, Feb. 27, in a Section 2AA semifinal in front of a near-capacity Bloomington Ice Garden crowd. Edina plays Bloomington Jefferson at 8 p.m. on Wednesday, March 3, in an 8 p.m. rematch of last year’s section championship.

“It happened to us in the middle of the year, which I’d rather have. I’m glad it happened in January rather than February.”

The Hornets sent shockwaves around the state on Feb. 11 when they rallied from a four-goal deficit to stun previously unbeaten and No. 1-ranked Minnetonka 5-4. The Hornets’ toughest opponent since that confidence-restoring win over the Skippers was Holy Angels (18-8-1), a team that matched Edina’s hustle and intensity in game played at warp speed from the opening puck drop to the final buzzer.

The estimated crowd of 2,500 was roaring for much of the game, the fans collectively rising time after time as the teams trade scoring chances.

Senior Ryan Cutshall then scored the only goal of the third, taking a pass from Steven Fogarty from behind the net and beating Stars’ goaltender Tommy Burke on the short side.

“There were guys everywhere,” Cutshall said about his goal. “But I saw a little net. It was crazy.”

The Hornets’ late-season turnaround can be traced, in part, to some line juggling that put Cutshall on a unit with Steven Fogarty and Jake Sampson. Fogarty led Edina in scoring in the regular season with 18 goals and 12 points.

“We’ve got four lines that are good,” said Cutshall who had seven goals during the regular season and now has two in two playoff games. “We’ve got our depth. And no one, really, is our first line. We changed up the lines a couple of weeks ago, and they’ve just been working good.”

The combinations were just good enough to get past a Stars lineup that includes two Division I recruits in Connor and Mike Reilly, seniors who have committed to play at Minnesota. Those two are among six Stars players who scored 20 or more goals during the regular season.

“The thing about them is they forecheck so hard,” Connor Reilly said about matching up with a virtual mirror image in Edina. “It just wears you down. That’s why they are such a tough team to play against.

"I thought (the pace of the game) suited us well because we are both quick, fast teams. But it’s pretty disappointing we didn’t come out on top.” 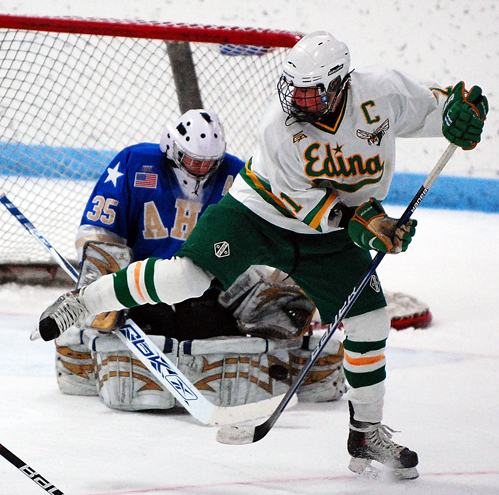 Charlie Taft of Edina attempts to tip a shot in front of Holy Angels goaltender Tommy Burke during a Section 2AA semifinal matchup at the Bloomington Ice Garden. Photo by Helen Nelson

1. Ryan Cutshall, Edina
Senior forward found an opening in front of the net to receive a pass from linemate Steven Fogarty, then found an opening in the back of it to deposit the puck for the only goal of the third period and what proved to be the game winner.

3. Joey Kopp, Edina
Junior fourth-liner provided huge lift to the Hornets by scoring a second-period goal that briefly put them ahead 2-1. He now has two goals in two playoff games, matching his regular season production. 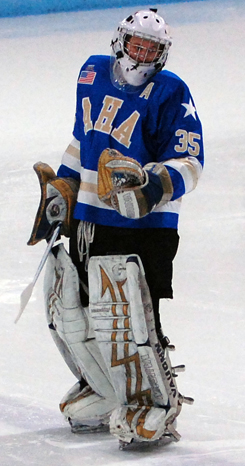 End of an era
The loss marked the end of brilliant careers for Holy Angels' Reilly brothers, Connor and Ryan. The standout seniors combined for 119 points this season and have committed to play at the University of Minnesota. They will play at least one year of junior hockey in the USHL before joining the Gophers. "They are the kind of kids who are very, very skilled," Holy Angels coach Greg Trebil said. "They kind of inspire the kids to work harder, because they would like to be that way. They just bring the crowds in. People would come because they want to see them play." Connor Reilly had an assist in the Stars' season-ending loss to Hornets and said he wouldn't have traded his high school experience for anything. "It’s unbelievable, just the fans, everything . . . the exposure. Everything about it is unbelievable. That’s why I don’t think any kid should leave early, just because of how fun it is. With the school supporting you, and just how fast it is and how great the hockey is."

Right on Target
Edina coach Curt Giles said the Hornets have a practice scheduled for Tuesday at the Target Center, a venue known most for being home to the Timberwolves but will become high school hockey central on Wednesday when the Section 2AA and 6AA championship games are played there.