Blaine comes up 'big' in overtime 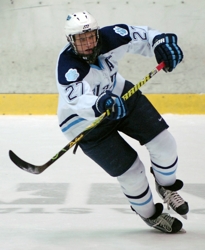 When drawing up a third-period strategy, and Nick Bjugstad happens to be on your team, there’s no need for a complicated array of Xs and Os.

No, the message could be as simple as, “Give it to the big guy.”

Blaine did, indeed, rely heavily on the goal-scoring brilliance of Bjugstad in the third period then got another big fella, Gavin Tufte, involved in overtime to fend off upset-minded Osseo 4-3 in wild Section 7AA semifinal matchup on Tuesday, March 2, at the State Fairgrounds Coliseum.

Tufte scored the winner with 2 minutes, 28 seconds left in the extra period when he wheeled around an Osseo defenseman then put a slick move on Orioles goaltender Jared Mol, who was unable to poke the puck off Tufte’s stick as the Bengals senior skated through the crease.

“It felt great,” the 6-foot-2, 205-pound Tufte said about scoring the winning goal that touched off a bench-clearing Bengals' celebration on the ice and mayhem in the Blaine cheering section in the bleachers. “It felt really good. Last year I scored in the section final (against Centennial). This is definitely on top.”

Bjugstad, one of 10 Mr. Hockey finalists and Minnesota recruit, put the Bengals on his oversized shoulders (he’s 6-5, 188 pounds) in the third when he scored twice to turn a 2-1 Osseo lead into a 3-2 Bengals advantage. 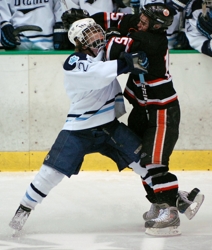 The score stayed that way until the final 13.8 seconds, when Osseo’s Tim Bonner spun and fired a floater toward the net that sailed into the short side, over a screened Blaine goaltender Danny Harper’s glove.

“Timmy is a great goal scorer,” Osseo co-head coach Kevin Wiley said. “And I’m not surprised that puck found the net because he’s been doing that for us all year.”

The defending section champion Bengals, seeded No. 1 in the section and ranked No. 5 in the Hub’s final Class AA poll, were forced to then gather themselves and stare straight into an overtime period against a team that wasn’t supposed to give them this tough a game.

“We were definitely flat the first two periods,” said Bjugstad, who is expected to be a first-round NHL Draft pick. “It was definitely not what we wanted. Luckily we came out in the third period ready to play.”

The victory was similar to last year’s playoff meeting between the two teams, also won by the Bengals in overtime.

“We were awfully lucky again.” Blaine coach Dave Aus said. “I feel bad for their kids, because this is two straight years we’ve done this to them. But like I said before the game, experience pays off at the end in games like this.” 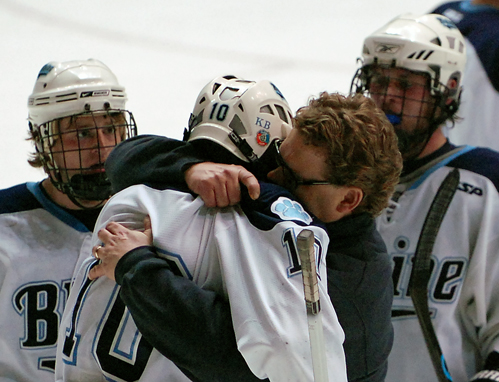 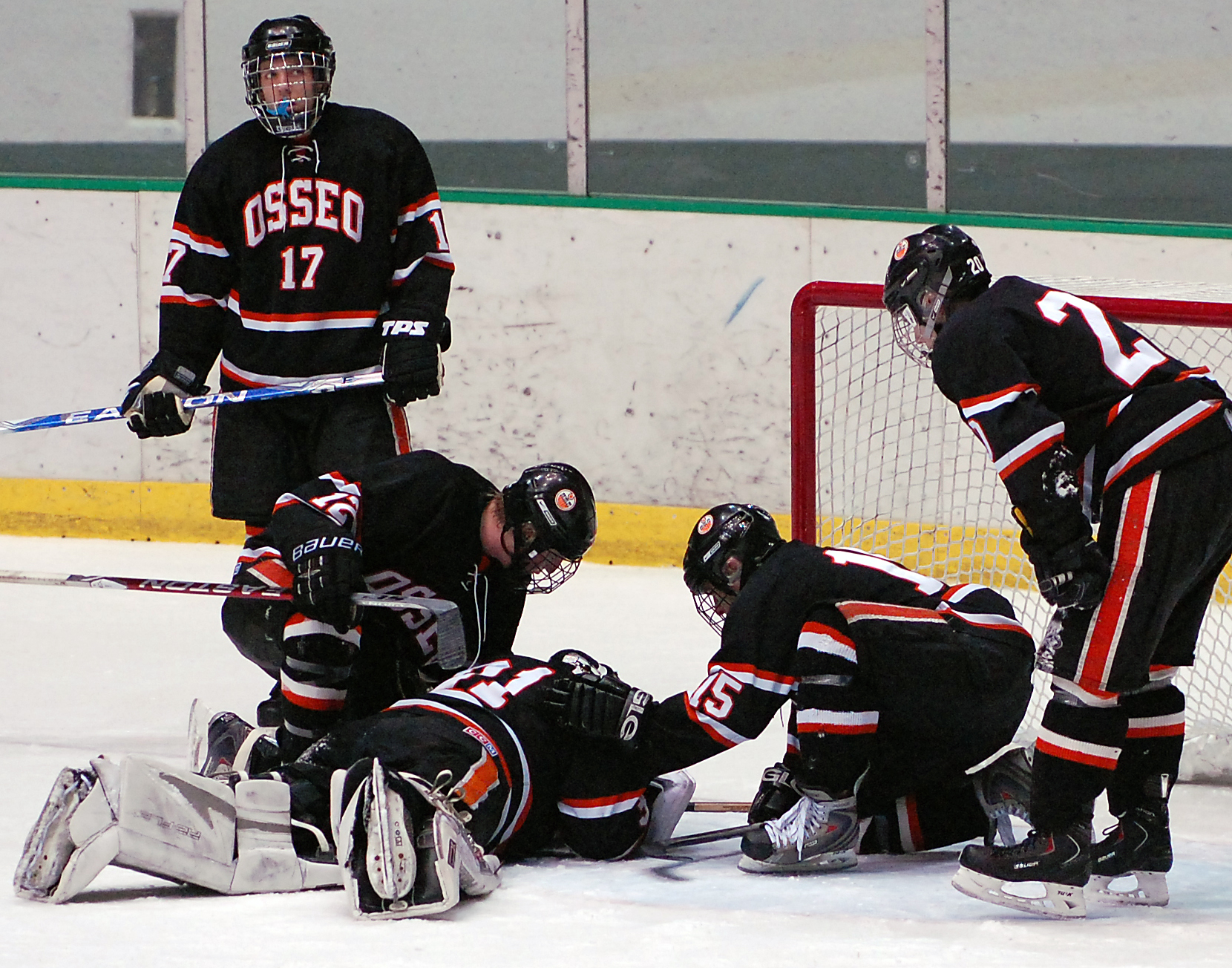 1. Gavin Tufte, Blaine
Big, strong Bengals senior forward showcased his speed and finesse on winning goal in overtime, gaining a step on an Osseo defenseman before putting a move on poke-checking Orioles goaltender Jared Mol that allowed Tufte to deposit the puck into an open net.

2. Nick Bjugstad, Blaine
Big strong Bengals forward (didn't we already say that?) scored twice in the third period as the Bengals rallied from a 2-1 deficit to take a 3-2 lead. By the end of the third period and into the overtime, the Mr. Hockey finalist was a creating great scoring chances on every shift.

3. Tim Bonner, Osseo
Orioles junior forward displayed his goal-scoring knack (he scored 28 this season) in most dramatic fashion, spinning and firing a shot that eluded Blaine goaltender Danny Harper to tie the score at 3 with 13.8 seconds left in regulation.

Evenly matched?
Defending Section 5AA champion Blaine (19-4-3) got the No. 1 seed and has the highest state ranking (the Bengals were No. 5 in the Hub's final state poll) of any team in the section tourament. Despite those credentials, Blaine certainly was no lock to beat  No. 4-seeded Osseo (15-8-3). The Northwest Suburban Conference foes had two one-goal games (both won by Blaine) during the regular season.

Uneven situation
Starting with an interference penalty on Blaine defenseman Tony Larson 22 seconds into the first period, both teams sent a parade of players to the penalty box in the opening 17 minutes. Osseo had three penalites and Blaine two in the first period, and during one stretch the Orioles played close to five minutes straight while shorthanded. Osseo got a shorthanded goal from Casey Cardille on a gorgeous behind-the-back centering pass from Alex Watkins and Blaine countered less than three minutes later with a power-goal on a blistering slap shot by Gavin Tufte.

Crashing the net
Osseo wasn't shy about sending players into the crease area, and at least three times through the first period and a half hard-charging Orioles players ended up sailing into the net behind Blaine goaltender Danny Harper. The Orioles went ahead 2-1 in the second thanks in large part to the work of a screen in front of Harper as James Hansen took a short from the left face-off circle.

Bengals not clicking Blaine, which came into the game converting power-play chances at an astounding 40-percent clip, was 1-for-3 on the power play through two periods. That's not a bad percentage, but not great given that one of those power plays was a two-man advantage in the first period. The Bengals' power-play features Mr. Hockey finalist Nick Bjugstad among a group of standouts that also includes Eric Scheid, Gavin Tufte, Tony Larson and Jonny Brodzinski.