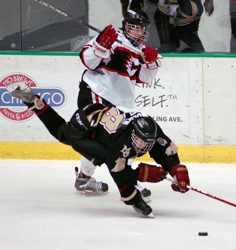 First they created an impromptu on-ice mosh pit, skate blades flashing as they piled on top of each other with youthful abandon.

Then they were climbing on top of the boards, then dangling from the Plexiglass, seemingly intent on tearing down the old State Fairgrounds Coliseum.

Judging by their celebration, by the way they went absolutely bonkers, you would have thought Maple Grove’s players had just won the biggest game of their lives.

Turns out, for many of them, they just had.

The Crimson beat Centennial 3-2 in overtime in a Section 5AA semifinal on Tuesday, March 2, and will face Blaine on Friday for a coveted state tournament appearance at the  Xcel Energy Center in St. Paul.

“It was so much fun here,” said Crimson senior Adam Reichert, who assisted on Tony Paulson’s winning goal with 3 minutes, 53 seconds left in the OT period. “But we’ve got to get to the Xcel to get the bigger atmosphere.”

Paulson, a sophomore, scored twice for Maple Grove. Spencer Bell, also a sophomore, opened the scoring for the Crimson with a shorthanded goal that, if anyone was counting, would most certainly make the season’s most-spectacular top 10. 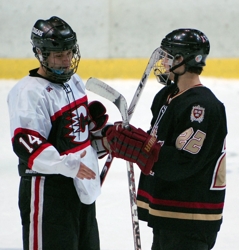 “We lost some good players, but this is a nice sophomore class that we have,” Maple Grove coach Gary Stefano said about a team that was supposed to be a year or two away from this type of theatrics. “As you could see tonight out there, we have some really talented sophomores.”

Setting up Maple Grove’s final goal was a too many men on the ice call on Centennial midway through the eight-minute overtime. The Crimson spent most of the ensuing power play in the Cougars’ zone and scored just a few seconds after the penalty had expired.

“Yes, we had too many guys out there,” Centennial coach Erik Aus admitted. “But I didn’t think they were going to call it.”

On the penalty call, it appeared as though there was heavy traffic coming and going at the Centennial bench as play came through the area. Aus, showing class in defeat, declined to complain about the call, instead pointing out that his Cougars had plenty of opportunities to score in both regulation and overtime and failed to capitalize.

“You feel awful for that team in there, because they came a long ways,” Aus said. “For me, I saw them all grow up, because my son (Charlie) is on that team. That makes it even tougher.”

On the winning goal, Maple Grove pressured Centennial for most of the power play, unloading shot after shot on Centennial goaltender Brett Larsen. As the power-play wound down, Cougars defenseman Brett Stern took a slapshot off his thigh and was barely able to skate as he tried to shake off the injury and continue to kill the penalty.

“We had a few shots on net, and the rebounds kept kicking back out to us,” Paulson said. “I think it was the second or third shot, and it just happened to be on my tape. The net was wide open.”

The two goals give Paulson 11 this season. He hadn’t scored in his six previous games.

“I just chucked it at the net and he banged it home,” Reichert explained.

And then, well, let the mayhem begin. 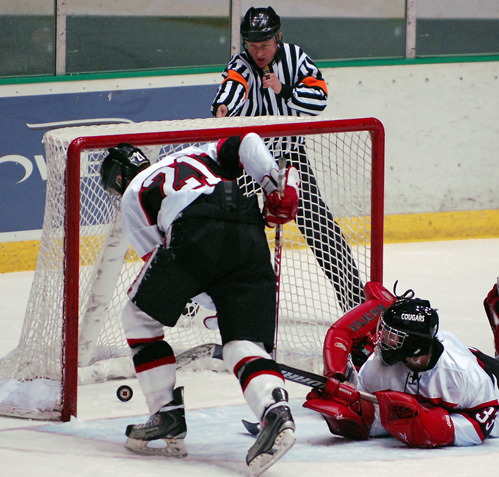 Centennial defenseman Brett Stern (21) and Cougars goaltender Brett Larsen are too late to stop the puck from entering the net in overtime on a shot by Maple Grove's Tony Paulson. Photo by Helen Nelson

1. Tony Paulson, Maple Grove
Scoring an overtime goal almost guarantees First Star status, and Paulson earned it as part of a Crimson power-play that kept the puck for what seemed like an eternity in the Centennial zone. The sophomore then showed poise beyond his years when the puck finally came to him at the side of the goal, as he calmly deposited it in the net.

2. Spencer Bell, Maple Grove
Another Crimson sophomore comes up big, and for Bell that meant beating one Centennial defenseman at center ice, another deep in the Cougars' zone and then, to finish off one of the most spectacular goals of the season, deked Centennial goaltender Brett Larsen so out of position all Bell had to do was dump the puck in an open net. Oh, and did we mention all of this came with Maple Grove shorthanded?

3. Brett Stern, Centennial
Senior defenseman and Minnesota State recruit scored on a rarely seen 3-on-0 rush, and he was his usual physical self in the Cougars' defensive zone, routinely delivering punishing hits to Maple Grove's forwards.

Full of confidence
Centennial had the higher seed in the section (the Cougars were No. 2) and a top-10 state ranking (No. 8 in the final Hub poll), but No. 3-seeded Maple Grove wasn’t lacking confidence entering the teams’ Section 5AA semifinal matchup. “The first two times we played these guys, the kids, they knew they could compete with them,” Maple Grove coach Gary Stefano said. “Then they came out and had a good first period here.” The Crimson beat Centennial 2-1 on Jan. 3 and lost to the Cougars 3-0 on Feb. 6. “We knew we could beat any team we played here,” added Maple Grove senior forward Adam Reichert.

Special teams advantage
Maple Grove killed off four straight Centennial power plays through two periods, with three of those penalties coming in the second period. The Crimson notched a shorthanded goal in the first period as they came out of all those special teams matchups with a one-goal advantage. "Our power play has been fantastic, and tonight we didn’t get a power play goal," Centennial coach Erik Aus said about a Cougars' power play that had converted 4 of 11 chances (36.4 percent) in the postseason.