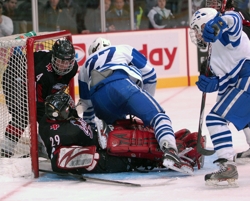 Although it sounds like something you might hear out of a vintage John Wayne western, “Everybody ropes, everybody rides” is a motto hard-hitting Minnetonka senior defenseman and co-captain Troy Hesketh, for one, expects the Skippers to live by.

Loosely translated in hockey terms, that means everyone on the team is expected to carry an equal share of the load.

So when junior Michael Helmer was promoted from the fourth to third line for Minnetonka’s Section 6AA championship showdown with defending state champion Eden Prairie on Wednesday, March 3, the thinking was he would make a solid contribution.

But no one, not even Hesketh, could have expected Helmer to make the play of the game early in the third period, fending off an Eagles defender behind the net as he dished a behind-the-back pass to Erik Baskin.

“Guy makes a great pass, and a guy buries it,” Eden Prairie coach Lee Smith said about the Helmer-to-Baskin goal that put Minnetonka ahead by two and sparked a 7-2 Skippers’ runaway at the Target Center. “It was a great goal.”

Unexpected? Eagles goaltender Andrew Ford didn’t see it coming, and neither, apparently, did his defensemen. Baskin, left open at the side of the goal, might have been the only player who wasn’t caught off guard, as he quickly deposited the puck behind Ford to put Minnetonka ahead 4-2 just 1 minute, 40 seconds into the final period.

“That was awesome,” Minnetonka senior Max Gardiner said about Helmer’s pass. “Connor Ryan is out of the lineup, and he stepped up and played a great game. He made an unbelievable pass to Baskin, and Baskin just tapped it in there.”

Ryan was forced to sit out the game after receiving a match penalty for checking from behind in Minnetonka’s section semifinal win over Benilde-St. Margaret’s. Helmer came into the section playoffs with one goal and three assists in 22 regular season games.

“I just looked over my shoulder and saw (Baskin)  there and laid it out in front,” Helmer said. “It wasn’t the one play or anything. Our line was going hard the whole shift. That was just bound to happen.”

The adrenalin surge carried the Skippers all the way to the finish, as they scored three more times to end the game, including a 180-foot empty-net shorthanded goal from Justin Holl after Eden Prairie pulled Ford while on a power play as time wound down.

“It’s an amazing feeling,” Hesketh said about winning a section title that has eluded the Skippers’ seniors for the two previous seasons. “But it starts now though. Yeah, we can celebrate this for a few days, but we’ve got to forget about this and go on to our next task.” 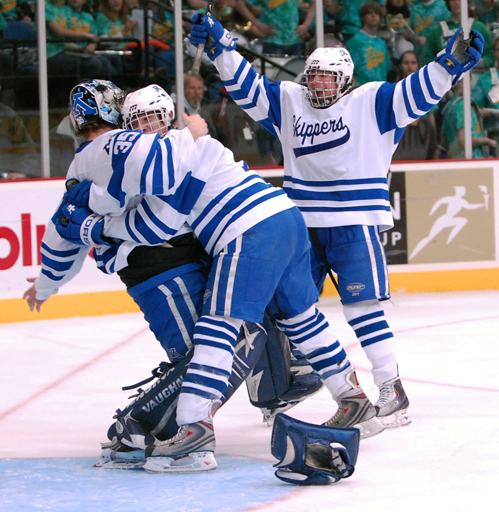 1. Tommy Lundquist, Minnetonka
Senior forward (pictured below) scored to tie the game at 2, a huge goal that seemed to spark the Skippers' offense. He also added a late power-play goal when he batted the puck out of the air baseball-style into the net.

2. Andrew Prochno, Minnetonka
Senior defensemen made a beautiful pass on a third-period rush into the Eagles zone, setting up Max Coatta for a goal that put the Skippers ahead 5-2. More importantly, he was a huge part of a Minnetonka defensive corps that held Eden Prairie star Kyle Rau in check for most of the game.

3. Luc Gerdes, Eden Prairie
Junior forward scored the Eagles' first goal, set up their second and was flying up and and down the ice all night. 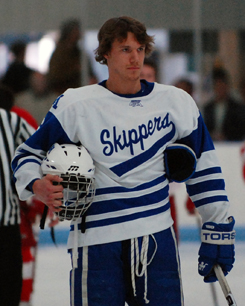 Young and old
Eleven players got on the scoresheet with either a goal or an assist in Minnetonka's runaway win over Eden Prairie. Among those players, freshman Max Coatta and sophomore Erik Baskin had goals, and two more standout sophomores, Michael Prochno and Sam Rothstein, added assists. "Those younger guys come in and take on big roles for us, and they were stepping up and making those huge plays," said Skippers senior co-captain Troy Hesketh, an Edmonton Oilers draft pick who has committed to play at Wisconsin. "They do a great job. You’ve got to look past the captains, we’ve got a great group of seniors, great leaders and stuff like that. But you’ve got to give it up to the younger guys."