There's nothing fancy about Edina 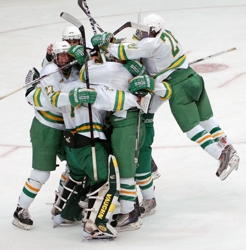 Country clubs and gallerias, white collars and wing tips are the more common stereotypes when folks get to summarizing what this plush southwestern Twin Cities suburb is all about.

And then you take a look at this year’s Hornets’ hockey team, which doesn’t so much finesse its opponents as it does pound away at them as plainly as a sledgehammer on concrete.

Bloomington Jefferson became the latest Hornets opponent to crack under all that stress and strain on Wednesday, March 3, in Edina's dominating 4-1 Section 2AA triumph at the Target Center in Minneapolis.

“We didn’t want to get too fancy or anything because we knew these games aren’t won with dangles, they are won with crashing the net,” said Edina senior Charlie Taft, who scored what proved to be the game-winning goal 71 seconds into the second period.

“We don’t have our superstar like Zach over there,” Taft said, glancing toward another of those seniors from last season, current Minnesota star Zach Budish, who attended the game and was standing in the hallway next to Hornets’ locker room afterward, “but I think thats makes us pretty hard to beat. Because we have three or four lines going and everyone is capable of scoring.” 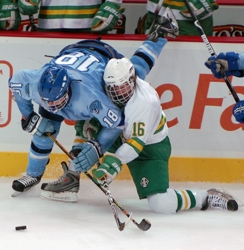 No. 3-seeded Bloomington Jefferson (19-6-3) and No. 1 Edina (20-6-2) didn’t play during the regular season. After watching this version of the Hornets up-close for the first time, Jaguars coach Jeff Lindquist came away impressed with Edina’s blue-collar tenacity.

“Other than the first period, they outworked us,” Lindquist said, “and that was the one thing that I didn’t think would be happening.”

The sketchy Target Center ice surface (there were coned-off patches of cement in several areas around the rink during Tuesday’s practice sessions) suited Edina’s straight-ahead style.

And while the Hornets’ strategy was to simply fire the puck at the net at every opportunity, this is a team with some skill, too.

On Taft’s goal, he broke in alone on Bloomington Jefferson goaltender Justin Woodley and, with a quick flick of his wrists, flipped a backhand shot into the upper reaches of the net.

Steven Fogarty followed with another gorgeous goal, streaking in along on Woodley and firing a rising shot over the Jefferson goaltender’s shoulder.

Not bad for a bunch of grinders.

“That’s a hard-hat type team,” Lindquist said. “People don’t talk about it, but they’ve got a lot of skill, too.”

Ryan Cutshall notched his second playoff goal in as many games, finishing off a pretty three-way passing play – and the Jaguars – to put Edina ahead 4-0 with less than 8 minutes remaining in the second period.

“Last year, when we had all those stars, we kind of knew what we were capable of doing,” Fogarty said. “This year we really didn’t have any idea. No one thought we were going to make it this far, but it feels really good.” 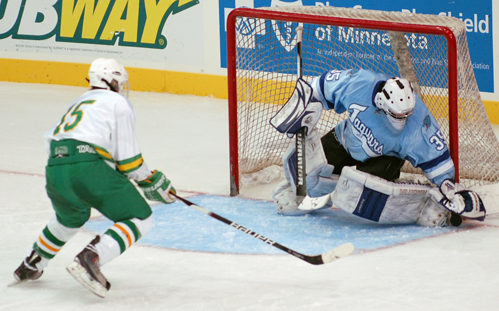 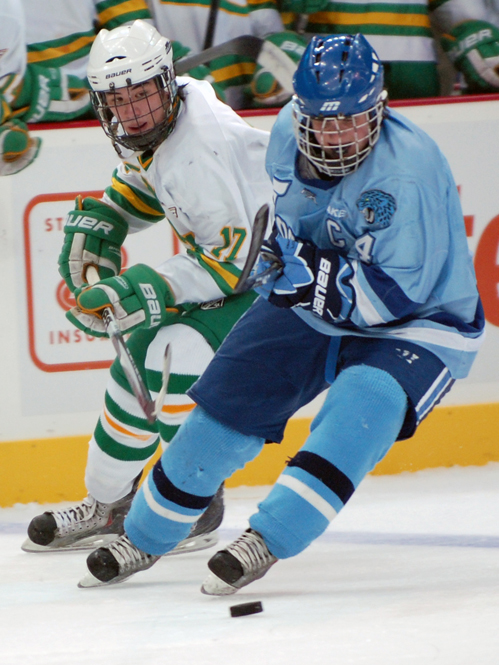 1. Steven Fogarty, Edina
Junior forward scored the Hornets' third goal on a rising shot from the slot and then, less than two minutes later, helped set up the Hornets' fourth goal.

2. Charlie Taft, Edina
Senior forward (pictured below) scored what proved to be the winning goal 71 seconds into the second period on a nifty little backhand scoop shot from close range. 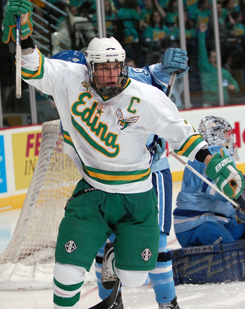 Beware on the benches
During Bloomington Jefferson's Section 2AA semifinal victory over Burnsville at Braemar Arena in Edina, a wayward high stick hit Jaguars coach Jeff Lindquist in the face. The aftermath of the incident left Lindquist with 16 stitches in the right side of his mouth and five teeth that Lindquist was told were "in peril." "I wasn't even leaning over the bench," said Lindquist, who did his best to immediately straighten his teeth after being struck. "They are straight right now, but I don’t know."

Searching for mo jo
In an attempt to spark the Jaguars, Lindquist pulled starting goaltender Justin Woodley and replaced him with Eric Fabano with Edina leading 3-0 in the second period. "Woodley did not get pulled because he was playing poorly, that was more of a momentum move," Lindquist said. Just 1:14 after Fabano entered, Edina scored again to take a 4-0 lead 9:09 into the period.

Beware: Thin Ice
By all acounts, the freshly installed ice surface at the Target Center was in brutal shape when all four Section 2AA and 6AA finalists had practice sessions there on Tuesday. Traffic cones were placed in the worst of the areas, and there reportedly was a patch of concrete to skate around behind at least one of the goals. The ice was vastly improved in time for Wednesday's games, although moving the puck crisply clearly was a challenge. "It was one of those games where it was going to be an ugly game. The ice wasn’t very good," Edina coach Curt Giles said. "And we knew that and we knew we had to get the puck in and take advantage of our opportunities."