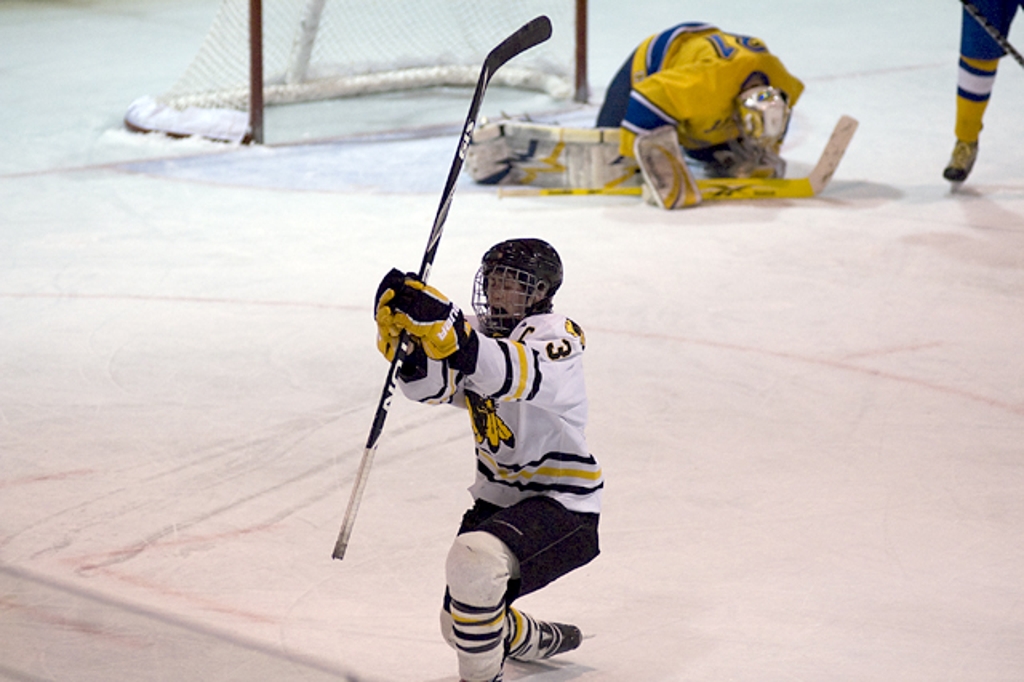 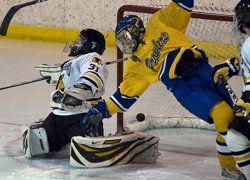 Long after his teammates had departed the rink in East Grand Forks Thursday night, Warroad goaltender Andy Foster lingered on the ice.

The sophomore grinned a young but grizzly-faced smile to friends and family and waved to the Warriors’ fans still applauding in the stands. As he crossed the ice to the locker room, Foster stopped to talk to everyone who asked, eventually drawing the urging of coaches to join his team.

One could forgive his delay, though.

Foster, who just a month ago was buried on the Warriors’ depth chart behind senior goalie Shawn Storey, had just played the game of his young life – and he certainly didn’t want to leave the ice.

Over the previous two hours, the sophomore netminder stopped all 25 shots he faced in the Section 8A finals against bitter rival Thief River Falls, earning a 2-0 shutout and the Warriors’ fourth straight trip to the state Class A tournament. Foster was at his best in the third period with Warroad nursing a two-goal lead. The Prowlers ripped 16 shots on goal in the final 17 minutes alone, but Foster turned aside every one.

“He was under a lot of pressure and he came through,” Warroad coach Albert Hasbargen said. “It was just a great game for him and hopefully he can continue it at the state tournament.”

For his part, Foster downplayed the accomplishment, much as he’s done since taking over the starter’s role back in late January.

“The guys were behind me on it and they kept my head up and helped me go the whole way through,” Foster said.

He wasn’t expected to see much varsity time this winter, with Storey carrying the load in his senior season. But when Storey hurt his knee in a Jan. 26 game against Crookston, Foster was thrown in the fire. All he’s done since is win 10 of his 11 starts while allowing more than three goals just once. In the past four games, Foster has given up just three goals.

“He’s done everything that we’ve asked of him,” Hasbargen said.

Both were factors in the game, but Foster stole the show -- with help from Nelson’s linemate, Brett Hebel.

Hebel opened the scoring at the 6:18 mark of the first period on a whirling rebound tally. Warroad senior defenseman Aaron Storey flipped a shot on Gothberg, who made the intial save, but Hebel spun in the rebound for a 1-0 lead – and the only goal the Warriors would need.

“It just went right out to me and I turned around and shot,” Hebel said. “Luckily it went in.”

Hebel also factored in the other goal, tipping a clearing attempt that Nelson corralled and rifled past Gothberg. The goal, with just 1:31 left in the second period, all but put the game out of reach. In each of the teams’ three meetings this year, the winning team scored exactly two goals (Warroad won 2-1 on Dec. 22 and Thief River Falls won 2-1 on Jan. 21).

“It’s easier to play with the lead, no question,” Thief River Falls coach Tim Bergland said. “We just didn’t bury our chances tonight and they did.”

Bergland talked his way through at least a half dozen scoring chances the Prowlers had that could have turned the outcome of the game. A missed net here, a clanger off the crossbar there, a scrambling save by Foster everywhere.

He made no excuses, but knew that it would be a tight-checking, low-scoring game. As the scoring chances slipped away, so did the game for the Prowlers, who have now lost to Warroad in the section tournament each of the past four years by a total of five goals.

As the Prowlers and fans slowly trudged out of the East Grand Forks Civic Center with another tough loss, though, the Warriors celebrated another visit to the state tournament. Hasbargen laughed as he considered the question of whether it still remains exciting after so many trips.

“It never gets old.” 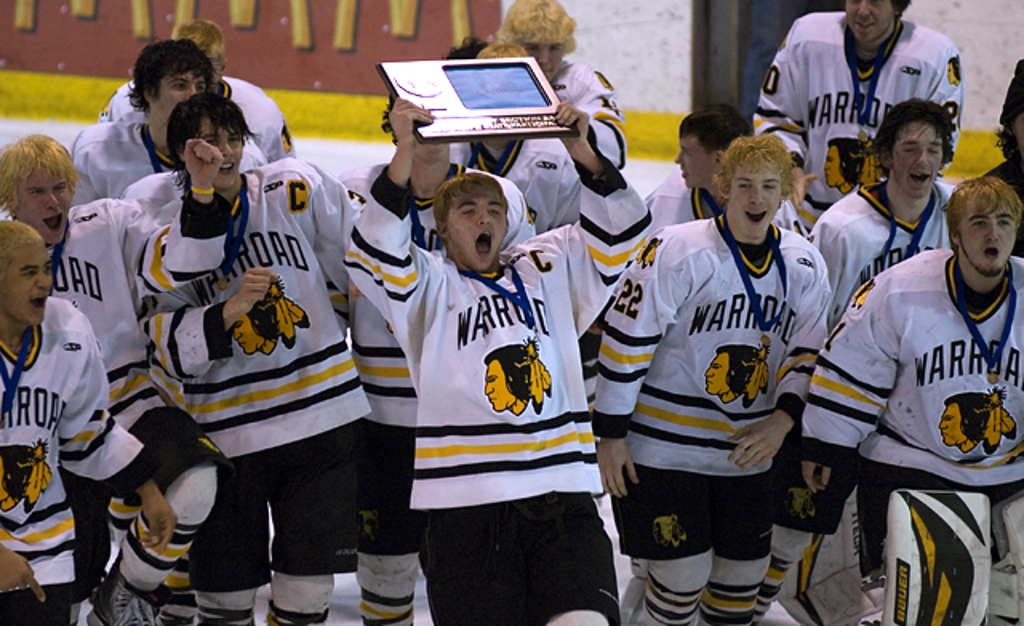 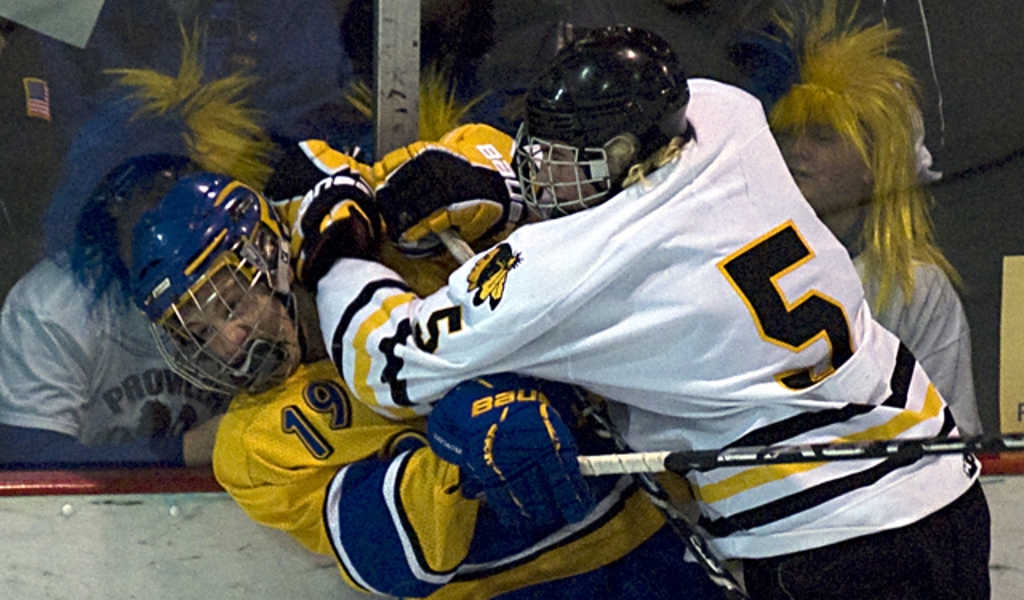 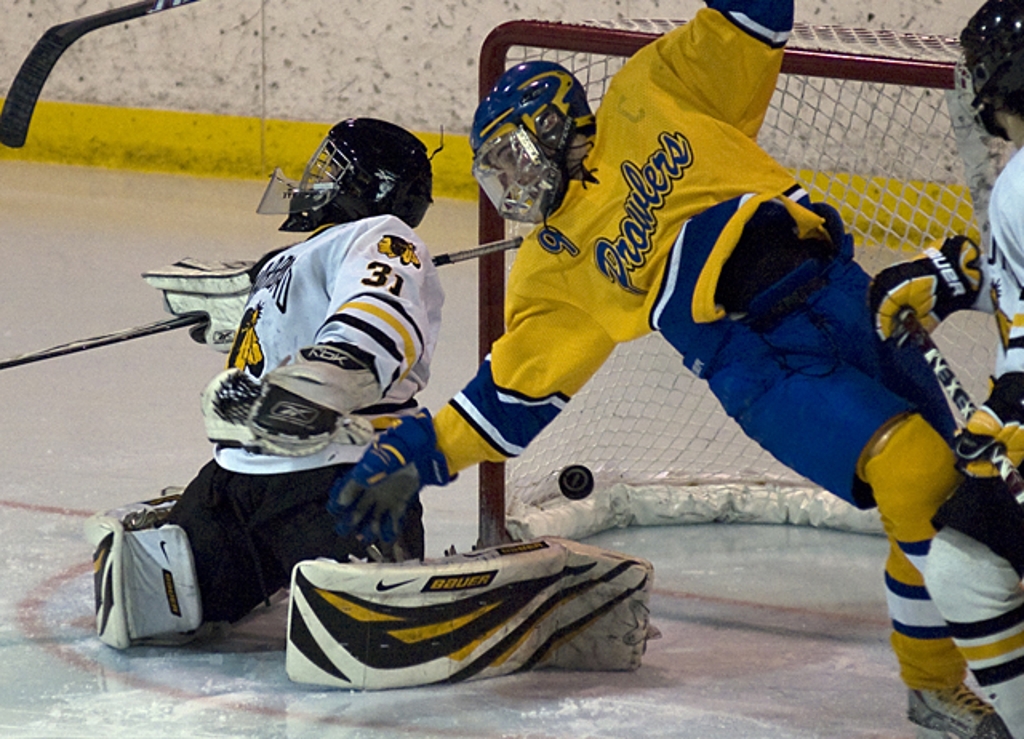 1. Andy Foster, Warroad
The sophomore goaltender wasn't tested with many rebounds, but he made every first save of the game.  Foster finished with 25 saves on 25 shots, including 16 in the third period when the Warriors were hanging on to a 2-0 lead.

2. Brett Hebel, Warroad
The senior forward scored the game-winner in the first period on a rebound, sneaking the puck past All-State goalie Zane Gothberg.  It was the only goal Warroad needed, but for good measure in the second period, Hebel deflected a clearing attempt that teammate Brock Nelson snared and pumped in for a 2-0 lead.

3. Brock Nelson, Warroad
Warroad's big senior forward scored on a shot from just inside the blue line in the third period to stretch the Warriors' lead to 2-0.  He was a factor with his physical play much of the game, and at times seemed to take Thief River Falls out of its game.  Nelson drew several penalties on Prowlers' looking to lay a big shot on him.

The House was a-rockin'
Despite at least an hour's drive for the fans of both teams (more for Warroad), the East Grand Forks Civic Center was packed to the rafters Thursday night.  Fans lined the rink and flowed into the aisles, giving the game a standing-room only crowd that may have kept the fire marshal busy.  Clad all in black and gold, the Warroad fans were dressed conservatively compared to the circus-like atmosphere on the Thief River Falls' side of the rink.  Prowler fans wore hockey jerseys and blue flashing LED sunglasses, draped blue and gold feather boas around their shoulders and flopped caveman-esque blue and gold wigs on their heads -- and that wasn't just the student section.  Plenty of parents joined in the festivities as well.