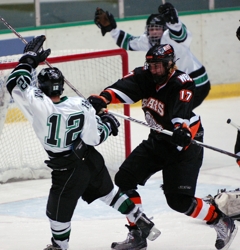 As section final celebrations go, this one was strangely subdued.

When the final horn echoed through the cavernous State Fairgrounds Coliseum, Hill-Murray players followed all the traditional postgame rituals after thumping arch rival White Bear Lake 5-1 on Friday, March 5, for the Section 4AA championship and a return trip to the state tournament.

Yeah, the Pioneers emptied the bench. They rushed their goaltender. They formed a jubilant mob scene at the net.

And that was about it. There were no sticks and helmets and gloves wildly being flung toward the ceiling, no spiderlike climbs up the boards and glass, no smothering dog piles.

“All day long, I’ll take this,” Lechner said when asked to compare the surprisingly lopsided win over the Bears to last year’s double overtime sectional final triumph over Stillwater. “But it’s not quite as much fun because it’s a little more anticlimactic. So you can’t go out and hug the players and jump around. You won maybe with a few minutes left, so it’s a little calmer.

“But it’s a nice problem to have.”

Lechner was being charitable when he said the Pioneers, the top seed in the section and ranked No. 4 in Class AA, had the game won with “maybe” a few minutes left.

Hill-Murray (25-2-1) scored three goals in a span of 5 minutes, 27 seconds in the second period to turn a 1-0 nailbiter into a 4-0 snoozefest. The Pioneers’ flurry of goals were scored in a variety of ways – a point shot by Chris Casto, a burst to the net by Ben Bahe, a pretty power-play goal by Jack Walsh – but each of them involved at least one pinpoint pass.

The prettiest of the goals might have been Bahe’s. A crisp cross-ice pass through the neutral zone – the equivalent of a half-court pass in basketball -- from Willie Faust sprung Bahe along the boards at the blue line, right next to the Pioneers’ bench.

“When he made that pass, and they connected, that got us all on our feet,” Walsh said. “And when he buried that puck it was a really good momentum swinger.”

With Hill-Murray ahead by four, the Pioneers playing their trademark brick wall defense and goaltender Tim Shaughnessy smoothly handling White Bear Lake’s occasional scoring chances, the third period seemed all but a formality.

For several minutes, it looked like there would be no third period. White Bear Lake (17-10-1) was late arriving to the ice, so late that one of the officials hustled down the hallway to the locker rooms to provide a reminder there were still 17 minutes to be played.

In the end, the final period was White Bear Lake’s best, as the No. 2-seeded Bears traded goals with the Pioneers while an arena that was all but packed in the second period steadily emptied as the clock wound down to the inevitable outcome.

Then came the Pioneers’ celebration. What there was of it.

“This isn’t our final goal,” Casto said as he left the ice. “You’ll see a celebration when we win state.” 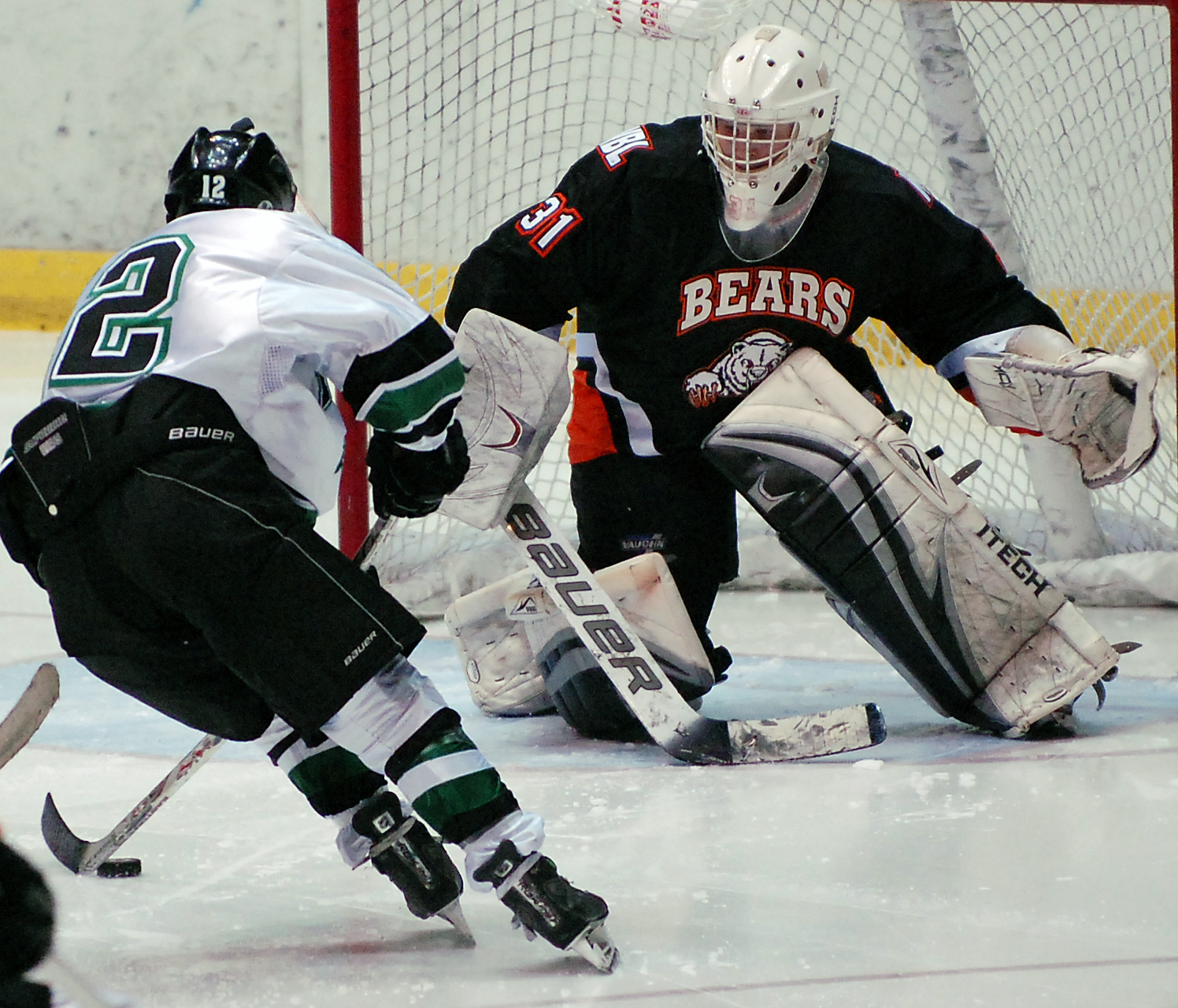 1. Kevin Becker, Hill-Murray
Junior forward had a hand in the Pioneers' first two goals. He scored the only goal of the first period, then took advantage of a White Bear Lake turnover in the second, feeding defenseman Chris Casto at the point for what proved to be the game-winning goal.

2. Jack Walsh, Hill-Murray
Senior forward and co-captain (pictued below) scored twice, including the final goal during a three-goal outburst in the second period that all but ended the Bears' chances for a victory.

3. Chris Casto, Hill-Murray
Scored the game-winning goal, delivered some big hits, moved the puck crisply out of the Pioneers' zone and helped kill a series of White Bear Lake power plays with the game still scoreless in the first period. 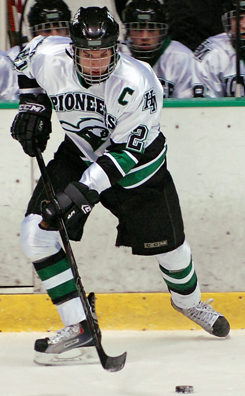 Second-period outburst
Hill-Murray grabbed the momentum in the second period on a power-play goal by defenseman Chris Casto that put the Pioneers ahead 2-0 with 11:04 left in the session. Casto scored on a low shot from the right point that found its way through traffic and under White Bear Lake starter Jared Schletty. It was the first of three Pioneers goals in a 5:27 span that left the Bears reeling.

Run-and-gun
If extra-credit was given on assists, Hill-Murray’s Willie Faust would have been a sure recipient of some bonus points when he flung a pass that crossed the entire neutral zone on a diagonal line and landed onto the tape of teammate Ben Bahe's stick. The high-revving Bahe did not break stride as he caught the pass at the blue line and sped in alone for a goal that put the Pioneers ahead 3-0.

Fashionably late
White Bear Lake was late arriving for the third period, so late that one of the referees left the ice surface and headed down the walkway toward the Bears’ locker room, presumably to remind them there was still 17 minutes to be played. With Hill-Murray fans growing more and more restless – and vocal – White Bear Lake finally returned to the ice.