Eagles are on the rise 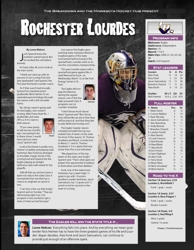 Josh Spaniol knew the numbers weren’t good. But he worked the calculation anyway.

It’s hard, after all, not to look at the train wreck.

“I think we came up with 92 percent of our scoring from last year graduated,” said Spaniol, the first-year Rochester Lourdes coach.

As if that wasn’t bad enough, Spaniol lost standout junior goaltender Nick Heimer for an extended period midway through the season with a left shoulder injury.

No, things weren’t going well for the Eagles, who weren’t scoring, didn’t have their No. 1 goaltender and were off to a 4-4-2 start to their season.

“If you were going to tell me two months ago I was going to be in these shoes, I would have said you were crazy,” Spaniol said.

Heimer is healthy and playing well, freshman Alex Funk has emerged to shoulder a large chunk of the scoring load and Spaniol has the
Eagles playing an airtight defensive style well-suited for the playoffs.

Add all that up, and you have a team not only in the state Class A tournament but one that has a chance to engineer an upset or two.

“I ran into a few our kids today,” Spaniol said on Sunday. “They are
still buzzing right now. Our program is very excited to get a taste of what we had last year.”

Last season the Eagles gave eventual state champion Breck its toughest game of the state tournament before losing in the quarterfinals. Lourdes went on to win the consolation championship.

This year Lourdes opens with a quarterfinal game against No. 4 seed Warroad at 8 p.m. on Wednesday, March 10, at the Xcel Energy Center in St. Paul.

The Eagles did not play the Warriors during the regular season, one of the few high-powered Class A programs not on Lourdes’ schedule.

“I don’t know much about them,” Spaniol said. “But I know they will be like we are in that they will be physical. And that they like to play defensive hockey, too.”

The Eagles’ regular season schedule included the top two ranked Class A teams in the state for most of the season, St. Thomas
Academy and Breck. Lourdes lost to Breck 2-1 and St. Thomas
Academy 5-3 in a game that was closer than the score indicated.

“We played two of the top teams in the state very tough,” Spaniol said. “That’s what gave our players the opportunity to believe in themselves and their abilities.”

Funk, one of the state’s best freshmen, has a team-high 15 goals to go with 14 assists. Another Lourdes freshman, Jason Samuelson, has 13 goals and 15 assists to tie for second on the team in scoring. 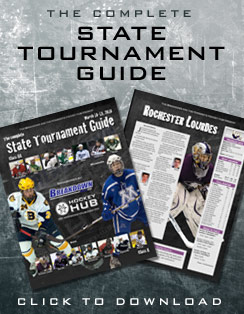