Oh, what a relief 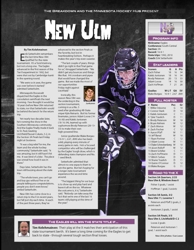 It’s a fond memory, but not a long one.

The Eagles advanced in the first season of the Tier II experiment in 1992, but were shut out by Cambridge-Isanti in the opening round.

“We were so in awe, the game was over before it started,” admitted Setterholm.

Minneapolis Roosevelt dispatched the Eagles in the consolation semifinals the next morning. Few thought it would be 18 years before New Ulm returned to state, nor that Setterholm would be behind the bench for the return trip.

And the Eagles finally made it back to St. Paul, beating Litchfield/Dassel-Cokato 5-2 in the Section 3A finals last Friday night at Gustavus Adolphus College in St. Peter.

“It was a big relief for me, the team and the whole hockey
community,” Setterholm said. “It was amazing, but it still hasn’t hit me. It was kind of a blur. The place was unreal how loud it was in
there.”

Days later, Setterholm has the town still buzzing about the state trip.

“The whole town, you can’t go and buy gas without five or six people telling you congratulations, people you don’t even know,” smiled Setterholm.

New Ulm has come close to a return trip to the X in recent years, but fell just shy each time. In each of the past three years, they’ve advanced to the section finals as the favorite, but lost in heartbreaking fashion.

Perhaps it makes this year’s trip even sweeter.

“The last couple of years, things didn’t go right in that final game for us,” shrugged Setterholm. “We didn’t get any bounces and things like that. Hit crossbars and pipes that would have changed the game. But we made the most of our opportunities Friday night against Litchfield.”

Ironically, this season New Ulm was the underdog in the section tournament, coming in as a No. 3 seed after graduating All-State sniper Kyle Reinarts. But his former linemates, juniors Adam Loose (14-16-30) and Kaleb Juntunen (18-16-34), teamed up with sophomore Brody Peterson (20-13-33) to make their own high-powered line.

Junior goaltender Blake Burgau (16-9-1, 2.67, .899) also has been
solid, playing every minute of every game. He’s a focused competitor who will be challenged by the Eagles’ tough draw, which is defending state champion and No. 1 seed Breck.

Setterholm admitted that almost no one expects them to win the game. But he’s hoping for a longer state tournament experience the second time around.

“The biggest thing for our boys is to show up and play hard and leave it all on the ice. Whatever the outcome is, it is,” Setterholm said. “Nobody can take away the fact that we’re one of the last 16 teams still playing at this time of the year.” 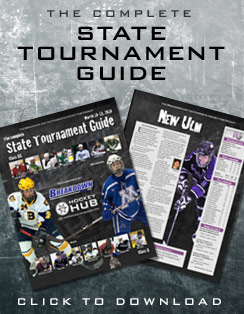