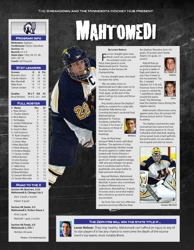 For two straight years now, Breck coach Les Larson and his assistant coach, son Peter, have gone to scout Mahtomedi and St. Thomas Academy in the Section 4A championship.

For two straight years, the ritual has been the same.

“My son takes notes on Mahtomedi and I take notes on St. Thomas Academy,” Larson said. “And, again, at the end of the game I roll up my notes and throw them away.”

Any doubts about the Zephyrs’ ability to contend for a state title should be fully laid to rest. Counting last year’s sectional final, Mahtomedi has defeated St. Thomas Academy, ranked No. 1 in Class A for most of the season, in three of their last four meetings.

How do they keep doing it? Well, it starts with Brad Wohlers. The epitome of a big-game goaltender, Wohlers made 44 saves against a Cadets team loaded with future Division I forwards.

Wohlers’ statistics are good (2.61 goals-against average,
.908 save percentage) not great, but it would be hard to find a goaltender who plays better in high-pressure situations.

Beyond Wohlers, Mahtomedi merely has elite defenseman Ben Marshall. A junior who committed to play at Minnesota as a sophomore, Marshall has 19 goals, 34 assists and a burst that makes him a threat to go end-to-end at any moment.

Add all that up and Mahtomedi has as good a stable of high-end talent as any Class A team in the tournament. The No. 2-seeded Zephyrs (23-5-0) will, however, have to find a way to combat No. 1 seed Breck’s depth should the teams meet. The Mustangs beat the Zephyrs twice during the regular season. Mahtomedi’s other losses came against state Class AA entrant Hill- Murray (twice) and St. Thomas Academy.

The Zephyrs reached the state tournament last season but lost their opening game to St. Cloud Cathedral when Marshall, skating at top speed, took a hard spill into the end boards. He was taken to the hospital and did not return. 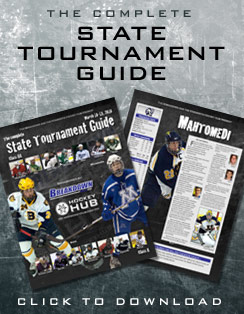