Hermantown preview: Pressure is off for senior-laden Hawks 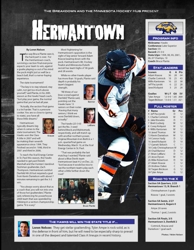 The way Bruce Plante sees it, the hard part is over.

For the Hermantown coach, surviving a section final everyone expects your team to win, against a goalie playing so out of his mind the puck might just as well be a beach ball, that’s a nerve-fraying experience.

“The key is to stay relaxed, stay calm, not get too much above yourself,” said Plante, in his 20th season as the Hawks’ head coach. “Just play your game, the normal game that you’ve had all year.

“Actually, the section final game is a lot harder. That is a pressure cooker. You are so close to (going to state), you have all these little dreams.”

Hermantown typically dreams big when it comes to the state tournament. The Hawks won the Class A title in 2007 and will be making their seventh appearance since 1994. They finished second in 1998, third in 2001 and third in 2006.

To reach the Xcel Energy Center in St. Paul this season, the Hawks needed to get past Duluth Marshall and the Hunters’ standout freshman goaltender, Zach Thompson. Hermantown outshot Denfeld 48-20 but required a goal from Kevin Danielson with about 7 minutes remaining to get the 3-2 win.

“You always worry about that as a coach that, you will run into one of those hot goaltenders,” Plante said, referencing his powerhouse 2004 team that was upended by Hibbing in a section championship
game. “It is scary.”

Most frightening for Hermantown’s opposition is the sight of big senior forward Adam Krause bearing down with the puck. Hermantown’s Mr. Hockey finalist and Minnesota-Duluth recruit has team highs of 38 goals and 28 assists.

While no other Hawks player has more than 18 goals, Plante said depth is probably his team’s biggest strength.

“All three of our lines scored against Denfeld,” Plante said, pointing out the Hawks have 13 seniors on their roster. “Having that many seniors, I think we wore Denfeld down, actually.”

The Hawks (25-3-0) got the No. 3 seed behind Breck and Mahtomedi, respectively, and will match up with another northern power, Virginia/Mountain Iron-Buhl in a 1 p.m. quarterfinal game on Wednesday, March 10, at the Xcel Energy Center in St. Paul.

“That was probably the last matchup I wanted,” Plante said about a Blue Devils team Hermantown beat 4-2 on Dec. 22. “Just because it would be nice to see the northern teams play each other a little farther down the road.” 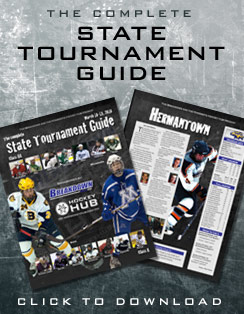