Time is now for Cards 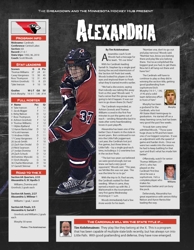 Alexandria coach Scott Woods had a message for his team.

With his Cardinals leading Sartell-St. Stephen by a single goal during the second intermission of the Section 6A finals last week, Woods looked his players in the eyes and implored them to finish what they’d started months earlier.

“We had a discussion, saying that nobody was taking this away from us this year,” Woods said. “I had a sense that this group wasn’t going to let it happen. It was our turn to go down there (St. Paul).”

The Cardinals responded, as Ashton Gronolz and Thomas Williams scored in the first five minutes to put the game out of reach – sending Alexandria back to state after some heartbreaking losses in past playoffs.

Alexandria has been one of the better Class A teams in the state in recent years. But they continued to run into the Little Falls juggernaut.

Last year, the Cardinals lost just five games, but three of them were to Little Falls – by a single goal each time, including a 3-2 overtime loss in the section finals.

“The last two years we believed we were good enough, but we knew we had a very good opponent,” Woods said. “This year, we felt like this was our year. This was the time for us to go.”

With the trip to St. Paul secure, the Cardinals waited for their seeding. When it came, they earned a match-up with No. 2 Mahtomedi in the tournament’s very first game Wednesday morning at 11 a.m. Woods immediately had a few more words for his team.

“Number one, don’t to go out and play nervous,” Woods said. “Number two, know you belong there and play like you belong there. You’ve accomplished the biggest goal you had, to get there. Now let it all hang out there and have fun.”

The Cardinals will have to continue to play as they did in winning the section title, getting good goaltending from sophomore Erich Murphy (16-3-1, 1.90, .914) and a solid team defensive effort in front of him.”

Murphy has been a godsend for the Cardinals, who lost All-Stater Matt Hemingway to graduation. He started off on a steep learning curve, but has been very good the past few weeks.

“It took him some time,” admitted Woods. “Those were huge shoes to fill and he’s been one of our biggest surprises. It was an adjustment with the speed of game and harder shots. Once we were two weeks into the season, he had to keep battling for that spot and that’s what has made him better.”

Offensively, watch for Williams (37-24-61), a senior has played on the Cardinals’ first line since he was a sophomore. He’s a complete player who makes his teammates better and can bury the puck. 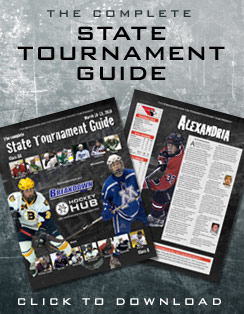