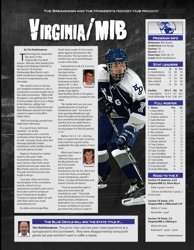 Technology has expanded the reach of the Virginia/Mt. Iron-Buhl hockey empire.

“We weren’t even on the bus yet,” laughed Hendrickson, who is enjoying his second straight trip to the state tournament. “Right after the game, I was getting texts from a former player who is now a Major in the Marines, calling from Quantico. (Former Blue Devil star) Matt Niskanen texted from Dallas (where he plays for the NHL’s Dallas Stars).

“With technology, people have really been following.”

It’s a good news, bad news situation. For all the congratulations also come the comments when things don’t go as well. Last year, those same text message playfully chided Hendrickson after the Blue Devils lost both games at state.

Virginia is hoping for a better result to this year’s state tournament experience. This year’s juniors were fresh-faced sophomores last year when the Blue Devils were two-and-done. The pain from those losses was tough to let go.

“Last year, when we lost the second game in the consolation rounds, a bunch of our sophomores wouldn’t come out of the locker room for at least an hour,” Hendrickson recalled. “Losing two games didn’t sit well with them and it was a real motivating factor.”

An older and stronger Blue Devils team awaits its first-round game against Hermantown this time around. The two teams are familiar foes up in the Northeast corner of the state.

Hermantown took a 4-2 victory over Virginia just a few days before Christmas on the Hawks’ home rink. Hermantown held a distinct 44-17 shot advantage, but senior goalie Casey Myhre kept the Blue Devils in the game – something he’ll be counted for this week.

“No matter who you are, your goaltending has to hold up,” Hendrickson said. “You have to have good goaltending to get there throughout the playoff run, but sometimes the bright lights and the Xcel can really throw a curveball at some pretty good hockey players for the first period or so.”

Myhre (10-3-3, 1.91, .922) has been a surprise this year, as he has
improved into a good varsity goaltender through plenty of hard
work. What hasn’t been a surprise is the offensive firepower of the Blue Devils, led by SCSU-bound junior Garrett Hendrickson (32-44-76). But it isn’t a one-man show, according to Coach Hendrickson, Garrett’s father. He plays all three lines and doesn’t shorten his bench.

“They’ve earned the right to play and I trust them all,” Hendrickson said. “These kids have all had played a lot of hockey and they have confidence in themselves. You can’t expect kids to have confidence if you don’t give them the chance to gain it.” 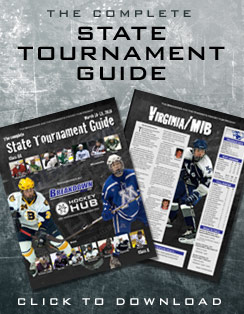