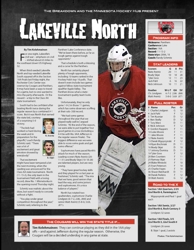 For one night, Lakeville’s civil war – emphasis on civil – shifted about 65 miles to the southeast down US Highway 52.

It may have been a ways to travel for a game, but no one wanted to miss the party afterwards. Or the reward – a trip to the Class AA state tournament.

South had to be confident after beating North twice during the regular season by a combined 9-1 score. But it was North that earned the state bid, courtesy of a surprising 5-0 victory.

“The kids had worked so hard during the week and in preparation for the playoffs,” coach Randy Schmitz said. “There was a lot of excitement and great emotion showed by everybody.”

That excitement might have been tempered a bit the next morning, when the seeding was announced for the Class AA state tournament. North (11-15-2), the only team in the tournament field with a losing record, drew No. 1 Minnetonka in the opening round Thursday night. Schmitz was realistic about the draw, but wasn’t ready to concede without a fight.

“You play under great competition throughout the year,” Schmitz said, referring to the Panthers’ Lake Conference slate. “We’ve been there before, as far as tough games against tough opponents.”

That schedule is both a blessing and a curse for the Panthers. North has certainly played plenty of tough opponents, including 10 teams ranked in the Hockey Hub’s top-10 polls. That doesn’t even include two games against fellow state tournament qualifier Apple Valley. The Panthers know what a state tournament quality team looks like.

Unfortunately, they’ve only gone 1-9-2 in those 11 games, which has some observers scoffing at their sub-.500 record.

“We had some games throughout the year that we played really well in,” argued Schmitz. “At the end of the season, we were able to put together four good games in a row (including a 4-4 tie with No. 9AA Jefferson in the regular season finale). The biggest difference was we were able to score some goals and get some offense.”

Sophomores have paced North’s attack for much of the season. Leading scorers Nate Arentz (20-11-31) and Brady Skjei (10-18-28) are talented players, but are very young.

“They have great hockey skills and they played for us last year as freshmen,” Schmitz said. “The mix that we have, good seniors that lead the way, and some juniors and sophomores. It’s a nice balance of players.” 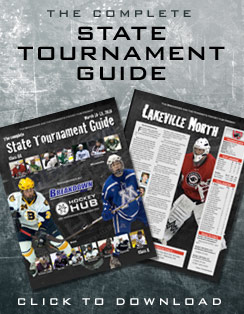