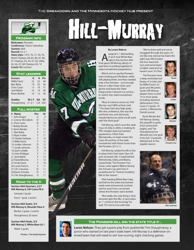 Which isn’t to say the Pioneers were looking past the Bears while still playing them, but they needed only a few minutes – just enough time to gather their sticks and gloves and leave the State Fairgrounds Coliseum ice surface – to switch into state tournament mode.

“Now it’s time to move on,” Hill-Murray coach Bill Lechner said. “This team had very high goals. Win the conference, this was the sectional one, and obviously everybody knows what we all want with the third goal.”

Hill-Murray, ranked fourth in the Hockey Hub’s final state Class AA poll, received a No. 4 seed behind Minnetonka, Edina and Blaine, respectively. The Pioneers’ two losses came against Blaine during the Schwan Cup and Class A powerhouse St. Thomas Academy late in the season.

After beating White Bear Lake and before the state tournament seeds were announced, Lechner said he wasn’t too concerned where the Pioneers were slotted.

“We’ve done well and we’ve struggled through the years, it’s
not like one avenue has been the right way. We’ve been the four seed and won and we’ve been a higher seed and we haven’t won. It’s fine.”

The Pioneers have a deep and balanced lineup of scorers, led by Willie Faust’s 22 goals and 44 points. Seven Hill-Murray players have scored 10 or more goals, including standout defenseman Chris Casto (13 goals, 18 assists), a Minnesota-Duluth recruit. Kevin Becker led Hill-Murray during the playoffs in goals (four) and points (eight), and Tim Shaughnessy has allowed just one goal in his last 10 periods, dating back to the regular season. 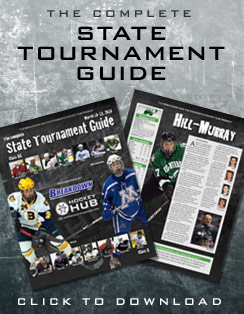