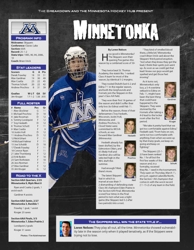 How good is Minnetonka?

The Skippers won their opening five games this season by a combined score of 39-1.

They twice beat St. Thomas Academy, the state’s No. 1-ranked Class A team for most of the season, by identical 5-2 margins. They routed Duluth East 6-2 and Edina 7-1 in the regular season, and both the Greyhounds and Hornets join the Skippers in this year’s Class AA field.

They won their first 19 games of the season and didn’t suffer their only loss (to Edina) until Feb 11. Before the season, three of their defensemen (Troy Hesketh, Wisconsin; Justin Holl, Minnesota; and Andrew Prochno, St. Cloud State) were committed to WCHA schools, as was forward Max Gardiner (Minnesota).

Hesketh already has been drafted, by the Edmonton Oilers, and it’s likely Holl and Gardiner also will be selected high in the
NHL draft this summer.

The latest Skippers’ feat in which to marvel at was their 7-2 dismantling of defending state Class AA champion Eden Prairie in the Section 6AA final. Minnetonka scored four times in the final period to turn what was a tight game (the Skippers led 3-2 after two periods) into a rout.

“They kind of smelled blood there, a little bit,” Minnetonka coach Brian Urick said about the Skippers’ third-period eruption. “Just when they knew they got the lead, I think their spirits just went up. As soon as we could get that lead I knew our guys would get sparked and get those feet moving.”

As it turns out, Minnetonka’s only loss, a 5-4 overtime setback to Edina on Feb. 11, might have been the best thing that could have happened to the Skippers. They were stunned by the Hornets after taking a 4-0 lead to the locker room after the first period.

“We take it pretty hard that we got too comfortable against Edina,” Hesketh said. “From here on out, we’re not too comfortable with anything. Even when we were up by that many goals, we keep on going and keep on fighting.”

The Skippers (25-1-2) have been ranked No. 1 for all but the first few weeks of the season and, in a formality, received they No. 1 seed in the tournament. They open on Thursday, March 11, at 6 p.m. against Lakeville North, the Section 1AA champion that comes in with the worst record (11-15-2) of any team in the field. 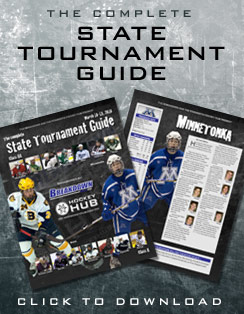