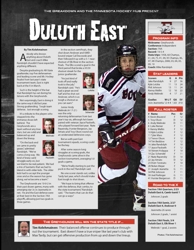 Anyone who knows anything about Duluth East and coach Mike Randolph shouldn’t have expected anything different.

Despite graduating its All-State goaltender, top five defensemen and leading scorer and Mr. Hockey finalist from last year’s state tournament team, East is right back at the X in March.

Such is the height of the bar that Randolph has set during his tenure with the Greyhounds. Not surprisingly, East is doing it the same way it did last year. Strong goaltending. Tough team defense. Just enough scoring. It’s a tribute to the players who stepped into the immense shoes left behind.

The Greyhounds are a team without any true stars, but are solid and balanced up and down the lineup.

“On the back end we came in pretty green,” admitted Randolph. “We’ve come a long way. We kind of knew we’d struggle early on, but we tried to be real patient. We had a mix of bantams that we had to blend in with older kids. The older kids had to accept the younger ones and as the season has gone along, we’ve become a team.”

The Greyhounds are 10-0-2 in their past dozen games, many with emerging star Jo Jo Jeannetta in net. He and the East defense were at their best in the Section 7AA playoffs, allowing just two goals in three games.

In the section semifinals, they shut down Andover and UM-Duluth bound sniper Cal Decowski and then followed it up with a 5-1 near shutout of Elk River in the section finals. The Elks scored a goal in the third period that broke a 93:59 shutout streak for the junior goaltender.

“He just kind of took off and really took to the job,” Randolph said. “He’s had a great second half and he shut out Andover, which is as tough a shutout as you can earn.”

But as with past East tournament squads, scoring could be the key. After some season-long struggles at scoring goals, the Greyhounds came alive in the section tournament, averaging 5.0 goals a game.

“We’re finally starting to put the puck in the net,” Randolph said.

No one scorer stands out, unlike Tardy last year, which should make East tough to shut down.

“We hope to bring that offense with the defense, that combo, to the state tournament,” Randolph said. “The teams that can do that
can go a ways.” 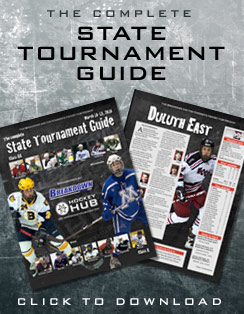