All systems go for Zephyrs 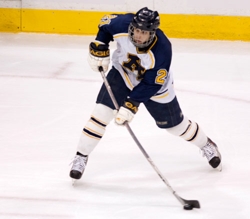 Paired alongside two 30-plus goal scorers, Mike Rose could best be described as the “other guy” on Mahtomedi’s irrepressible first line.

“I’d say my role is strong defense,” said Rose, a junior. “Zurny and Adams, they’ve got the strong shots, they can pick any corner and put the puck away.

“I just stay high, pick up the extra man and get the puck out of the zone.”

Rose did a lot more than that on Thursday, March 10, in the quartefinals of the state Class A tournament at the Xcel Energy Center in St. Paul. He scored a goal in each of the first two periods as the No. 2-seeded Zephyrs steamrolled Alexandria 7-1.

When the defensive-oriented Rose is scoring, that can only mean that his linemates, seniors Brandon Zurn and Charlie Adams, are having big games too. Sure enough, the trio scored all seven of the Zephyrs’ goals, with Adams getting the hat trick.

“It’s a team game, and there are roles to play,” Mahtomedi coach Jeff Poeschl said. “These guys, their role is to score.”

Zurn and Adams each entered the tournament with 33 goals but, strangely, no interest from Division I programs. Poeschl said Zurn will most likely play junior hockey in the USHL or NAHL next season while Adams will probably end up at a Division III college.

On Thursday, anyway, all of the Zephyrs's biggest stars looked perfectly suited for an NHL rink.

“It all starts on defense,” Rose said about his line’s scoring prowess. “We break the puck out clean and just keep rolling.”

More specifically, much of the Zephyrs’ offense originates from junior defenseman Ben Marshall. A Minnesota recruit and projected NHL draft pick, Marshall played all but a handful of minutes in each period and controlled stretches of play, putting on a show with his high-grade puckhandling and skating skills.

Marshall, who entered the tournament with 19 goals and 34 assists, tacked on four more assists to his point total against the Cardinals. He helped set up three of the Zephyrs’ first four goals and was particularly active in the early stages of the game.

“I try to pick my jumps,” Marshall said. “The team matters that we’re playing, too. But I’m confident in my forwards, most of the time I don’t really need to jump up.”

With Rose scoring, Marshall dishing and Zurn and Adams doing their usual scoring, Alexandria (21-7-1) was overrun for the first time all season.

"Their top guys did what they needed to do," Alexandria coach Scott Woods said. “We hadn’t lost a game like that all year. That was probably the most disappointing thing in the game, we knew we couldn’t get in the penalty box, and that just ate us up.”

Four of Mahtomedi’s goals came on the power play, and the Zephyrs added another while shorthanded.

Alexandria’s lone goal came 5:30 into the third period by Ashton Gronholz. Just prior to that, Adams triggered a wild celebration in the Mahtomedi student section when he finished off his hat trick.

“It felt amazing,” Adams said. “To start of a first game like this, you can’t even explain it. The feeling right now is unbelievable.” 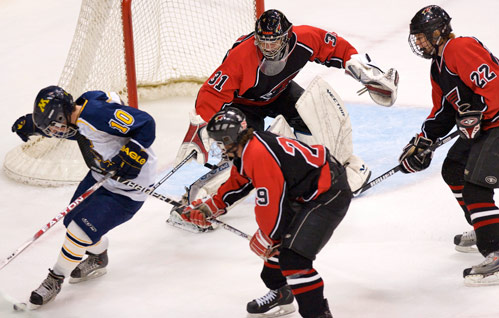 1. Charlie Adams, Mahtomedi
Senior scored twice in the opening 2 minutes, 15 seconds of the third period to give Zephyrs a 6-0 lead and put the game out of the Cardinals’ reach. Adams’ second goal of the period was his third of the game, and a flurry of hats hit the ice moments after the puck crossed the line as the euphoric Mahtomedi student section paid tribute to the goal.

2. Ben Marshall, Mahtomedi
Junior defenseman rarely took a shift off. And by that, we mean he was on the ice for all but a few minutes of each period and was spectacular throughout, either setting up teammates with pinpoint cross-ice passes (he assisted on each of the Zephyrs’ first three goals) or creating scoring chances on his own with end-to-end rushes.

3. Mike Rose, Mahtomedi
The often forgotten forward line with high-scoring Charlie Adams and Brandon Zurn, Rose proved he’s not just a third wheel. He scored once in each of the first two periods and added an assist as the Zephyrs surged to a 4-0 lead after two periods.

Power-play disparity
Alexandria had the first power play in Wednesday's quarterfinal game against Mahtomedi, but the Cardinals generated few chances largely in part to their inability to win face-offs. Just 70 seconds after killing the Alexandria power-play, Mahtomedi was awarded one of its own. The Zephyrs were much more effective in gaining control in the offensive zone and Brandon Zurn eventually scored to put them ahead 1-0.

More of the same
The second period went much the same as the first in terms of special teams, with Alexandria first failing to score on a power play chance and Mahtomedi cashing in on one of its own so after. The Zephyrs' power play goal was a beauty, with Mike Rose and Ben Marshall working a nifty give-and-go that sprung Rose in along on Alexandria goaltender Erich Murphy.

It could have been worse
Mahtomedi led 4-0 after two periods, but if not for a spectacularblocked shot by the Cardinals' Aaron Rentschler the margin would have been even more lopsided. With Alexandria's Murphy out of position after making a save and the puck sitting in the crease in front of the empty net, Rentschler sprawled in front of a shot by a diving Mike Rose.