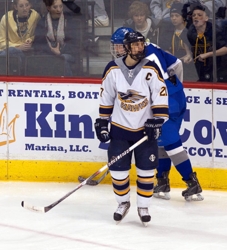 Having taken his considerable game to the state’s biggest stage, now was the time for Hermantown’s Adam Krause to show off his full array of skills.

Or not. As it turns out, Krause wasn’t all the interested in scoring during the Hawks’ nerve-fraying 2-1 Class A quarterfinal victory over Virginia/Mountain Iron-Buhl on Wednesday, March 10, at the Xcel Energy Center in St. Paul.

Sure, Krause scored the game-winning goal in the third period on a beautiful snap shot that hit the top portion of the net, the goal announcing itself with a clanging that echoed throughout the building

But what Krause, one of 10 Mr. Hockey finalists and a UM-Duluth recruit, was most proud of was the job his line did in controlling the Blue Devils’ top forward unit led by junior scoring phenom Garrett Hendrickson.

“I knew our other two lines match up really well with them, that we were better,” said Krause, who has 66 points this season. “My objective today was to kind of stop that first line. I wasn’t looking to score or get a hat trick or anything.

Hendrickson entered the game with 32 goals and 44 assists, his 76 points the third most of any player in the tournament behind Warroad’s Brock Nelson (85) and Breck’s Tyson Fulton (84). A potential NHL draft selection, Hendrickson was held without a shot against the Hawks (26-3-0), finishing with a plus/minus rating of minus 1.

“That line did not get a goal,” Hermantown coach Bruce Plante said about Hendrickson’s forward unit. “They had a few shots, but I thought they shut them down really well. It took a little bit off Adam’s game, but he is a real team guy. He just wants to win. That’s all he cares about.” 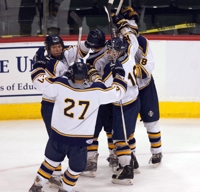 Taking a rare break from squaring off breezer to breezer, shoulder to shoulder with Hendrickson, Krause fed Cody Christopherson with a perfect pass through a lane in the slot during a Hawks power play. Christopherson unloaded a high shot that beat Blue Devils goaltender Casey Myhre on the short side.

“It was a great pass,” Christopherson said about Krause’s feed. “He sees everything that is going on great.”

The Blue Devils (18-8-3) got the only goal of the second period, from Travis Eddy, to forge a 1-1 tie heading into the third period of a game that was unusually suffocating for the quarterfinals, when the style typically is more wide open.

“They are a good team, we are good team,” Virginia/Mountain Iron-Buhl coach Keith Hendrickson said. “That was a typical state tournament game, these are the kind of games you don’t usually see until the semis of the finals where it’s really tight. There wasn’t a lot out there.”

Krause, of course, was largely responsible for that shortage of space.

1. Adam Krause, Hermantown
Senior Mr. Hockey finalist put the Hawks on his shoulders, setting up their first goal with a perfectly placed pass through the crease to Cody Christopherson on a power play, then scored the winner – his 37th goal of the season – by snapping a blistering shot into the upper reaches of the net.

2. Tyler Ampe, Hermantown
The Hawks’ senior goaltender stopped 20 shots and was one of the differences in a game that was, for the most part, evenly played. Hermantown had been rotating its senior goaltenders (Tiegen Brickson) also has seen significant time, but Ampe has taken over in the playoffs. On Wednesday, he showed why.

3. Travis Eddy, Virginia
Junior forward scored the lone goal for the Blue Devils, forging a 1-1 tie early in the second period. He finished with a team-high eight shots, more than a third of the Blue Devils' total.

Role playing
Andrew Oakes suffered an ankle injury in Hermantown's Section 5A championship game victory over Duluth Denfeld and did not play against in the Hawks' state quarterfinal victory over Virginia/Mountain Iron-Buhl. Although Oakes' isn't one of Hermantown's biggest scorers (he had seven goals and five assists in 25 regular season games) his injury is significant because it forced Hawks' coach Bruce Plante to radically alter his normal game plan. "He’s our speedster on that line, and we use them against the other team’s best line all the time, so it’s kind of a checking-line kind of thing," Plante said. "That made a little difference in our approach." Plante used the line centered by Mr. Hockey finalist Adam Krause as the shut-down unit against the Blue Devils' high scoring unit centered by junior St. Cloud State recruit Garrett Hendrickson.

Crowd count
The announced attendance for Wednesday's opening session of state Class A quarterfinal games at the Xcel Energy Center was 5,420. Last year's total attendance for all sessions was 116,690. The record is 125,201, set in 2006.