Mustangs off to races 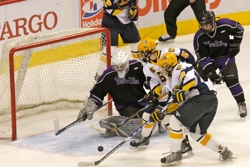 New Ulm coach Erik Setterholm sat quietly as he pondered the question. Had he seen anyone quite as powerful as defending Class A state champion Breck?

The inquiry came just moments after his Eagles were dispatched 11-1 by the Mustangs (27-2-0) in the quarterfinals of the Class A tournament on Wednesday, March 10, at the Xcel Energy Center in St. Paul.

Setterholm slowly shook his head.
“Nowhere close to the intensity of Breck,” he said. “They certainly take care of business.”

The top-scoring team in the state added another chapter to its impressive season. Breck tied a state tournament record with seven goals in the second period, including an amazing five in span of 1 minute, 57 seconds, as it rolled past New Ulm.

“That’s how fast it was?” shuddered Setterholm with an uncomfortable laugh.

Unfortunately, it was. For that two-minute span, the Breck offense created more room than a suite at the Hilton. And it was just as luxurious to behold.

Ben Gislason started the second-period avalanche of goals by scoring at 10:19 to put the Mustangs ahead 5-0. Goals by Grant Opperman, Tyson Fulton, Wesley Iverson and Conor Anderle followed in rapid-fire succession, the last of which came at 12:16 of the period.

Breck coach Les Larson appeared pleased with the victory, yet he wasn’t lounging on the duvet in satisfaction.

“It gets you to the semifinals, which is nice. But now we’re going to forget about it,” Larson said. “This team has had the ability to play well and then put it behind (them).”

The seven goals in the second tied the state tournament record shared by Eveleth (1945) and Hill-Murray (1991).

Two of Breck’s goals came in a span of 16 seconds, three came within 25 seconds and four came within 52 seconds.

Breck’s outburst came after New Ulm held the Mustangs scoreless through the game’s first 12 minutes. A two-goal flurry by the top line of Fulton, Riley Borer and Mike Morin late in the first period was the only thing keeping Larson from really letting his team hear it at intermission.

“He came in and yelled,” Fulton laughed, drawing a playful glare from his coach. The senior sniper quickly revised his statement. 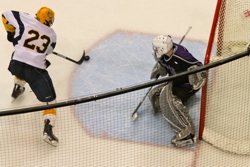 “He got us pumped up again. He said we were here last year so we should be used to it.”

Fulton finished with two goals and three assists, while Borer added a goal and two assists and Morin had a goal. All that offense came in just two periods, as the Mustangs’ top trio sat out the entire third period, scrunched on the far end of the bench next to starting goaltender John Russell, who also sat out the final 21-plus minutes in favor of backup Max McCormick.

“We didn’t touch the ice, and coach called it a trade-off for keeping us together all year,” laughed Morin. “We have some pretty good chemistry. We have a good mix between physicality and then we can all pass the puck and shoot the puck.”

Breck, trying to become the first Class A team to repeat as champion since the tournament was divided into AA and A divisions in 1994, fired 52 shots on New Ulm goaltender Blake Burgau. The junior made 41 saves, some with a spectacularly quick glove hand. Despite allowing all 11 goals, Setterholm praised his goaltender’s efforts.

“It’s a good thing he showed up to play today,” Setterholm said.

Kaleb Juntunen scored for New Ulm late in the third period. The Eagles (16-10-1) finished with 16 shots.

1. Tyson Fulton, Breck
Division 1 programs should take note of Fulton, who continued his assault on the scoring books with two goals and three assists. He was in on five of the first six goals before sitting out the entire third period.  His speed and quickness was a cataylst for the Mustangs' high-powered offense.

2. Riley Borer, Breck
Borer combined with Fulton and Mike Morin to make a dangerous first-line that threatened to score every time it touched the ice.  The trio didn't even play the third period, but managed to combine for four goals and five assists in just 34 minutes of game time.

3. Blake Burgau, New Ulm
Sure, it's tough to get a star of the game when you give up 11 goals, but Burgau was the best player on the ice for the Eagles.  His glove was all that kept the game from becoming even more one-sided than it ended.  He could have gotten shellshocked, but remained focused...which is key because no one but Burgau has been between the pipes for New Ulm this season.  Not even a single second.