Class A quarterfinals: Breck awaits in semifinals for revenge-minded Warroad 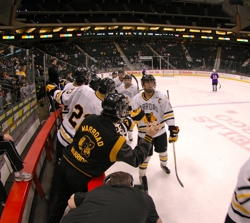 The rematch is on.

After suffering a bitter loss to Breck in last year’s state Class A championship, Warroad, which makes its seemingly annual March trek to St. Paul with only one intention, gets its much-anticipated shot at the Mustangs.

With a 9-0 victory over Rochester Lourdes on Wednesday, March 10, in the last of the day’s four quarterfinals at the Xcel Energy Center in St. Paul, the attention immediately shifted to Friday’s semifinal rematch between teams that won their opening-round games by a combined score of 20-1.

“They are a great hockey team,” Warroad coach Albert Hasbargen said about the Mustangs, who beat New Ulm 11-1 in Wednesday’s other evening quarterfinal. “We are going to have to have some luck when we play them. Hard work is going to be a lot of it, but down here you have to have some bounces.”

The Warriors didn’t need many bounces against the Eagles. Having Brett Hebel and Brock Nelson in the lineup greatly diminishes the need for luck. They and sophomore linemate Tanner Pederson combined for seven of the Warriors’ goals, most all of them highlight-reel worthy.

Nelson, a Mr. Hockey finalist who has committed to North Dakota, scored on two of four breakaways, set up Hebel for two gorgeous goals that showcased Hebel’s cannon shot and chased down a length-of-the-ice pass from Hebel to set up Pederson for yet another goal.

While Nelson and Hebel have been playing together since their youth hockey days, Hasbargen did split up the duo for an extended stretch during the season.

“I’m one of these guys where there’s nothing in stone,” Hasbargen said about putting Hebel and Nelson on different lines. “I like to move the furniture around a little bit. Just so they can appreciate each other a little bit more.

“You try to do it at the right time of the season, and it looks like these two are making me a genius right now.”

Warroad sophomore goaltender Andy Foster stopped all 18 shots he faced, running his shutout streak to 114 minutes, 30 seconds. He hasn’t been scored upon since Kittson Central’s Craig Lindegard slipped one through early in the third period of the Section 8A semifinals back on Feb. 27.

Foster wasn’t expected to see much varsity time this winter, with Shawn Storey expected to carry the load. But when Storey hurt his knee Jan. 26 against Crookston, Foster took over – and hasn’t looked back. He’s now won 10 of his 11 starts, including back-to-back shutouts in his past two games.

“He’s back again this year,” Hasbargen said about Russell. “Hopefully our young goaltender can match his performance, and the boys work hard.

"Maybe we’ll get a bounce.”

1. Brett Hebel, Warroad
Senior with the cannon shot scored three goals, but also showed some playmaking ability when he set up linemate Brock Nelson for the game’s first goal. He also banked a soft clearing pass off the glass that had the perfect pace, allowing Nelson to chase it down and set up another goal. Hebel finished with three assists.

2. Brock Nelson, Warroad
Senior Mr. Hockey finalist had three breakaways in the first period alone, and broke free for yet another solo rush in the third. He finished 2-for-2 and had three assists, setting up his linemates for some gorgeous scoring opportunities.

3. Andy Foster, Warroad
Sophomore goaltender wasn’t tested much in earning the shutout, but he was forced to make some difficult saves among the 18 shots he faced and didn’t seem unnerved by playing on the state’s biggest stage.

Long time coming
Rochester Lourdes didn't get its first shot until there was just less than 7 minutes remaining in the opening period. Freshman Alex Funk took the shot from the high slot that Warroad goaltender Andy Foster easily turned aside. The Eagles finished the first period with two shots, the second coming from almost the entire length of the ice with a few minutes remaining.

Breaking away
Brock Nelson, Warroad's Mr. Hockey finalist, had three breakaways in the opening period. Nelson went to the backhand on all three of his solo rushes, scoring on the first chance but missing on the next two. One the second try, Rochester Lourdes goaltender Nick Heimer made a nice pad save and on the third Nelson lost control of the puck as he came into the crease area and didn't get a shot off.

Flexing their muscle
Through two periods of Warroad's game against Rochester Lourdes, the four seeded Class A teams had outscored their opposition by a whopping 25-3 in Wednesday's quarterfinals. That stat is a bit deceiving, however, given that Hermantown and Virginia/Mountain-Iron Buhl were evenly matched in a thrilling game won by Hermantown 2-1.