The kids have it 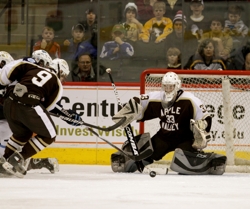 The kids have grown up, eh?

With underclassmen logging a ton of ice time, unseeded and unranked – and often overlooked – Apple Valley shocked favored Blaine 2-0 in the state Class AA quarterfinals on Thursday, March 11, at the Xcel Energy Center in St. Paul. It was the first upset in the opening six state tournament games (including Wednesday’s Class A quarterfinals.
“They’re really never nervous. They basically know how to play the game of hockey,” Apple Valley’s Adam Robson said of his younger teammates, players such as sophomore defenseman Derek Smith, sophomore forward A.J. Michaelson and freshman forward Hudson Fasching. “They play like juniors and seniors.”
Apple Valley finished with just 17 shots, but the line of Fasching, Michaelson and Michael Berens generated at least as many good scoring chances as Blaine’s top unit led by Mr. Hockey candidate and Minnesota recruit Nick Bjugstad.
But it was Robson, a senior, who picked up the biggest goal of the night, breaking a scoreless tie with just 1 minute, 15 seconds left in the second period. It came on just the Eagles’ third shot of the period.
Senior Chris Fischer dumped the puck into the left corner behind Blaine goaltender Danny Harper. Junior Kris Goodman beat the Bengals' defense to the puck and flipped it into Harper’s skates. Robson crashed hard into the slot, dribbling the puck into the far corner for a 1-0 lead.
“I was with Kris Goodman last night, and we were talking about today’s opportunities for the game,” Robson said. “All we were saying was go hard to the net.”
It was a classic playoff goal, as well. Mucking and grinding. Hard working. An upset special.

Meanwhile, junior goaltender Aaron Gretz made sure the single goal stood up, stopping all 30 Bengals’ shots. The last time Apple Valley (18-11-0) qualified for the state tournament (1996), they rode a hot goaltender (Karl Goehring) to a state title. Feeling déjà vu?

“I knew coming in that I was going to get bombarded and would have to make some big saves,” Gretz said.

Apple Valley coach Jerry Hayes was asked whether he considered going into a defensive shell with a one-goal lead late in the third period. He deadpanned that it was never option.

“I didn’t want to confuse our guys,” Hayes joked. “We just wanted to continue to play the game the way it was meant to be played. Smart hockey is defensive hockey.

“Smart hockey is getting the puck deep when you hit the red line.” 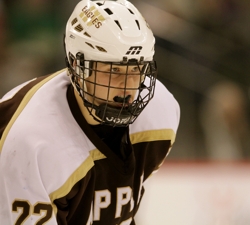 Apple Valley proved it may be young, but certainly smart. Hayes was loath to use the upset word to describe his team’s victory, but his players seemed to feed off the role.

“We’ve been the underdog since the section semifinals against Eagan,” Fasching said. “And we will be tomorrow, too.”

Fasching added an empty-net goal in the final minute, his team-leading 24th of the season.

Blaine, making its fifth-straight state tournament appearance, was ranked No. 5 in the Hockey Hub’s final state poll. Apple Valley had lost six of its final eight regular season games heading into the playoffs.

“We don’t regret the game plan or the way we played,” Blaine coach Dave Aus said. “We just didn’t win.”

2. Adam Robson, Apple Valley
Eagles senior scored the winning goal late in the second period, pouncing on a loose puck in the slot. Robson's goal was by far the biggest of the tournament to date.

3. Hudson Fasching, Apple Valley
Freshman forward was a Bjugstad-like force on most every shift. He sealed the win with an empty-net goal with 11 seconds left and finished with a team-high six shots.