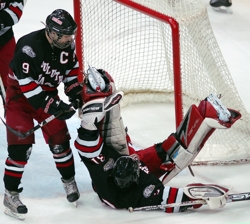 It wasn’t exactly the start Hill-Murray coach Bill Lechner envisioned. But by the final horn, his fears had faded away like so many nightmares at sunrise.

Down by two goals midway through the first period, the Pioneers roared back for a 5-3 victory over Duluth East on Thursday, March 11, in the quarterfinals of the state Class AA tournament at the Excel Energy Center in St. Paul.

Lechner’s bad dream was dispelled on a wild exchange of goals on either side of the first intermission, a stretch of five goals in just 1 minute, 55 seconds of elapsed time – four of which were scored by his Pioneers.

“Obviously, we didn’t want to get down 2-0,” Lechner said. “They really shut us down. They were very aggressive on their forecheck and bottled us up. It took a while to figure out how to break it.”

The Greyhounds (19-6-4) came in with a sound game plan against the fourth-seeded Pioneers (26-2-1), throwing their weight around and keeping Hill-Murray’s skilled forwards from setting up in the offensive zone. They outshot the Pioneers 23-16 and other than that fateful two-minute span, outscored them as well.

“We played very well except for two brutal minutes against a team that will hurt you,” Duluth East coach Mike Randolph said as he sadly shook his head.

As he spoke, Randolph glanced over at the two defensemen sitting to his left, senior Jayce Paulseth and sophomore Nate Repensky. He seemed to be using the press conference as a teaching moment, reminding his team that defensive breakdowns will always be painful in the state tournament.

It certainly was. East broke a cardinal rule of hockey not just once, but four times. And it paid the ultimate price. 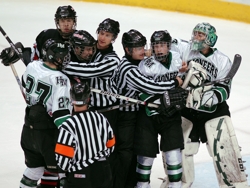 The tornado of goals began with Hill-Murray scoring twice in just nine seconds during the final minute of the opening period to erase a 2-0 deficit. Duluth East answered with a goal from Dom Toninato with 16 seconds left in the period to regain the lead. The three goals to end the period were scored in 43 seconds.

“It was quite the range of emotion,” Hill-Murray’s Willie Faust said. “We were down when we got behind 2-0, then jubilation when we got those two quick goals, then a shot in the stomach when they got that goal.”

But the second period started much the same, with Hill-Murray score twice in the opening minute, the first coming 18 seconds into the period and second coming at the 56-second mark.

Fourth-liner Andy Faust started the big outburst, opening the floodgates for the Pioneers. Lechner said he threw the line out there on gut feel.

“They’ve been playing well all year and our guys were a bit gassed and frustrated,” Lechner said. “I saw the look on (Andy) Faust’s face that they were excited to get out there. I told them to take a shift and they scored the goal.”

Ben Bahe added a first-period goal, while Willie Faust and freshman Zach LaValle did the scoring to start the second.

East picked up goals from Trevor Olson and Nate Repensky to gain the early 2-0 lead. Goaltender Jo Jo Jeannetta finished with 11 saves, while Hill-Murray’s Tim Shaughnessy, after allowing three first-period goals, shut down the Greyhounds over the final 34 minutes. He made 20 saves.

1. Zach LaValle, Hill-Murray
The freshman factored in the two biggest goals of the game for the Pioneers -- and the final two goals -- scoring the game-winner just 56 seconds into the second period, and then icing the game with an assist midway through the third. He shrugged off a check and gave Jack Walsh an easy tap in.

2. Willie Faust, Hill-Murray
After Duluth East scored in the final 16 seconds of the first period to retake a lead, Faust made sure it didn't last long. His goal just 18 seconds into the second continued the Hill-Murray rally.

3. Tim Shaughnessy, Hill-Murray
After a tough first period, Shaughnessy stymied the Greyhounds the rest of the way, stopping 20 of 23 shots. Duluth East actually outshot the Pioneers 23-16, but couldn't get another past Shaughnessy over the final 34 minutes as his team rallied.