Heartbreak, then joy for Hawks 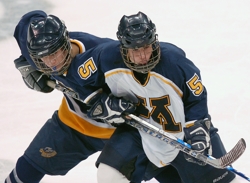 In the chronicling of sporting events, descriptions like heartbreaking loss and miracle victory often get handed out lightly.
This is not one of those times.

In one thrilling game, in just under an hour of elapsed time, both participants experienced each, if but for only a moment.

Mere minutes after believing it had lost the game on a buzzer-beating goal, No. 3 Hermantown was celebrating an improbable berth in the state final on sophomore Jared Thomas’ game-winner 1 minute, 12 seconds into overtime, lifting the Hawks past No. 2 Mahtomedi, 7-6 in the state Class A semifinals Friday, March 12, at the Xcel Energy Center in St. Paul,

Streaking in alone on Zephyrs goaltender Brad Wohlers, Thomas faked a backhand shot and then quickly went to his forehand. With Wohlers scrambling, Thomas slid the puck into the net, then lost his stick and his balance as he crashed into the end boards.

A wild celebration then ensued, as Hermantown (27-3-0), which had rallied from a two two-goal deficits midway through the third period, emptied its bench and raced after Thomas.

“I have so much energy right now, I could do anything,” Thomas beamed. “After the goal went in, I was just thinking, ‘Did I just score the game-winning goal to get to the state championship game?’“
Absolutely.

Against Hermantown tradition, the sophomore likely didn’t have to carry his teammates’ bags to the bus after the game. He’d certainly earned a reprieve.

Meanwhile, Mahtomedi, which had its own on-ice celebration minutes earlier, wandered heartbroken off its bench.

“We thought we had it,” Zephyrs’ senior Charlie Adams said. “It hurts. It really hurts.”

Adams believed he had given Mahtomedi a buzzer-beating victory in regulation. He corralled a drop pass from defenseman Ben Marshall and ripped a shot over Hermantown goaltender Tyler Ampe as the horn sounded.
Victory.

The Zephyrs streaked off the bench, tossing sticks and gloves across the ice and swarming Adams. But referees called upstairs to review the goal. After a brief break, the call came down.

No goal. No victory. 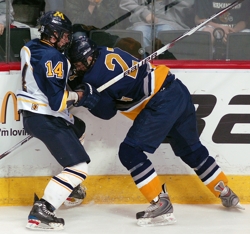 Mahtomedi coach Jeff Poeschl described the game as a roller coaster, both in momentum and emotion.

“I think we all threw up on that roller coaster,” Poeschl deadpanned. “The severity of (the loss) is just that, severe.”

To Poeschl’s left, his players looked shell-shocked, as if they were mired in the first stage of grief – disbelief. Each claimed the loss hurt, but it didn’t look like they were ready to accept it.

As the Zephyrs left the interview room, the two deciding goals were being replayed on a TV monitor. They stopped to watch for a moment, but couldn’t face the pain.

Buoyed by two goals from Adams, the Zephyrs never trailed until the end. After Brandon Zurn netted his second goal of the game midway through the third, Mahtomedi (24-6-0) pushed its lead to 6-4.

“You’ve just got to keep playing,” Hermantown coach Bruce Plante said. “This team is like that – a great competitive group of kids. I knew this team was not going to give in.”

Both teams featured Mr. Hockey candidates – one this season and one most assuredly next season – and they weren’t afraid to mix it up. Hermantown boasted of bruising forward senior Mr. Hockey finalist Adam Krause, a reflection of the Hawks’ hard-hitting physical team. Mahtomedi countered with smooth-skating, quick junior defenseman Ben Marshall, a mirror of the Zephyrs’ style.

For much of the game, they went head-to-head, banging on each other in a true knock-down, drag-out war.

In the end, both looked spent, holding their heads in their hands, stunned by the result. But there was one difference.

Krause wept for joy.
And Hermantown moved on.

1. Charlie Comnick, Hermantown
Senior made Hawks' improbable finish possible, scoring a hat trick in the third period as Hermantown rallied from deficits of 5-3 and 6-4. Comnick scored twice within a 51-second span in the third, the last of his goals coming with 5:42 left in the period.

2. Jared Thomas, Hermantown
Hawks sophomore scored the biggest goal of the tournament -- not to mention his life -- 1:14 into overtime. Thomas had 11 goals during the regular season and two more in the section playoffs but will forever be remembered for the one that ended one of the most exciting state tournament games in recent memory.

3. Ben Marshall, Mahtomedi
Zephyrs' do-it-all junior defenseman scored twice and had an assist, threw numerous heavy body checks and, had it counted, would have been credited with a beautiful set up of Charlie Adams on a goal that was waived off because it entered the net fractions of a second after the horn to end the third period sounded.

Zephyr, meet Immovable object
Not all checks are created equal, particularly when taking the quirks of the rink into account.  When Hermantown's Charlie Comnick rode Mahtomedi's Josh Erickson out of the play as he crossed the blue line, it looked innocent enough at first. Except when the check continued down the boards and directly into the stanchion at the end of the Hawks' bench. The blow stopped Erickson in his tracks and knocked his helmet to the ice. Fortunately, Erickson was all right and skated to the bench.

Wohlers, Olympic hero?
After an especially acrobatic save in the first period, Mahtomedi's student section showed its appreciation for goaltender Brad Wohlers. They began chanting "Ryan Miller" in reference to the MVP of the USA's just-coompleted Olympic hockey run. Then followed it up with a cheer of "Bradley Wohlers." Over the past two playoff runs, Wohlers has earned a reputation as a big-game goaltender, twice upsetting St. Thomas Academy in the Section 4A finals.

True to form
Not only were Friday's four Class A semifinalists the top four seeds in the tournament, all four also were in the top five of the Hockey Hub's final Class A poll. Breck finished the year No. 1, followed by Mahtomedi at No. 3, Hermantown at No. 4 and Warroad at No. 5. Those teams were seeded 1-4 in the same order for the tournament. Mahtomedi knocked off the state's No. 2-ranked team, St. Thomas Academy, in the Section 4A championship.

Throwing his weight around
Mahtomedi defenseman Ben Marshall, a junior Minnesota recruit known mostly for dragstrip accelartion on his up-ice rushes, did some heavy hitting in the opening period. He leveled at least three Hermantown players, one of which was Hawks' Mr. Hockey finalist Adam Krause during an extended series of physical exchanges between the teams' biggest stars.