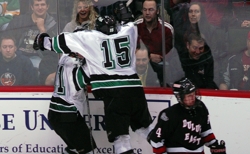 The grandest high school hockey stage in North America has a way of bringing out the best and, at times, worst in those performing on it.

From John Mayasich’s seven hat tricks over four tournaments from 1948-51 to Dave Spehar’s trio of hat tricks for Duluth East in the 1995 tournament to goaltender Greg Stutz’s “hat trick” of shutouts to lead Centennial to a state title in 2004, scores of individuals have amazed with their talents at the boys Minnesota State High School Hockey Tournament.

Entire teams, however, can demonstrate flashes of brilliance and futility from time to time as well. The first two days of the 2010 tournament are a case in point. Both Class A and AA have included quarterfinal contests featuring five-goal flurries within two-minute spans.

Among Class A favorite Breck’s state-record-tying seven second-period goals in its 11-1 victory over New Ulm on Wednesday was a five-goal barrage requiring only 1:57 to complete.

Not to be outdone, Hill-Murray and Duluth East combined for a handful of goals (four by the Pioneers) in a 1:55 stretch straddling the first intermission in the Class AA quarterfinal nightcap on Thursday.

Asked to explain the phenomenon, Benilde-St. Margaret’s coach Ken Pauly looked upon it as a product of the environment.

“This atmosphere is really an artificial atmosphere for these kids,” said Pauly. “I do think has more of a tendency to happen (in the state tournament) than in other places.” 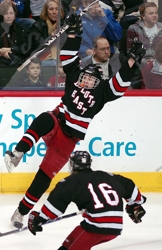 After trailing 2-0 for most of the first period, Hill-Murray’s Andy Faust and Ben Bahe scored nine seconds apart to tie the game with 50 seconds left. But East’s Dom Tominato’s goal just 34 seconds later put the Greyhounds back on top at the break.

Pauly pointed out that a natural letdown is common for the goal scoring team and the state tournament setting only magnifies it.

“I think that goes right back to the artificial nature of the environment. A nothing rush with 8.7 seconds left looks like nothing and — all of a sudden — it’s in,” Pauly said. “It’s difficult to manage it because you’re trying to control the energy level of 16 and 17-year-olds.”

The lead was short-lived, however, as the Pioneers stormed back with goals by Willie Faust and Zach LaValle in the first minute of the second period to seize a lead Hill-Murray would never relinquish.
Randolph pointed to Hill-Murray’s experience as a factor in their landing on the positive side of the two-minute goal torrent.

“I don’t think there’s any question. Hill-Murray had more guys that have played on this stage,” said Randolph. “They lost their first game last year, as we did, but if you look at how many guys we lost and how many guys they lost (to graduation), and it’s not even close.”

The first period’s final minute was a learning experience for Hill-Murray according to Pioneers’coach Bill Lechner.

“You can’t let off the pedal. During the year sometimes when you play some teams you can let off the pedal and they go away,” said Lechner. “They just had a big lesson tonight that these teams right now, they don’t go away. There’s a reason they’re down here (at the state tournament).”