Back to back for Breck 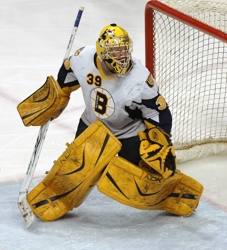 Maybe it sounds preposterous, a state champion being determined by nothing more than a simple nod of the hockey gods.

But that’s the way Hermantown coach Bruce Plante and his star player, Adam Krause, boiled down the Hawks’ 2-1 loss to Breck in Saturday’s state Class A championship on Saturday, March 13, at the Xcel Energy Center in St. Paul.

There was no disagreement from Breck coach Les Larson or his players. Really, how could there be?

Mustangs forward Mike Morin scored the game winner with 1 minute, 40 seconds left when the puck pinballed off his shin pad and past Hermantown goalie Tyler Ampe.

“We scored so many goals this season, and then for it to come down to, you know, just hitting his shin pad and going in, the irony of that is overwhelming in itself,” Larson said after his Mustangs became the first Class A team to win back-to-back titles and the first team in any class to repeat as champions since Bloomington Jefferson won three straight titles ending in 1994.

Hermantown controlled long stretches of the game, hit two posts and Breck goaltender John Russell’s facemask with shots in the third period and finished with a 31-20 advantage in shots on goal. 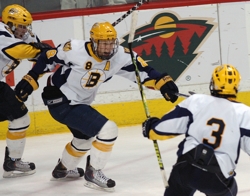 Yet when the final horn sounded, it was Mustangs sticks and gloves and helmets that were being thrown toward the arena’s rafters. Russell, having performed this magic act once before, ripped his facemask off and raced toward the glass near the Breck student section.

“Think of the best feeling in the world, and you and multiply it by 10, and that’s maybe half of how good it feels,” Russell said. “It feels so good. The season is so long, we work so hard every day in practice and in the weight room.

“At the end of the year, to be able to do that, it’s the best thing in the world. It’s all you could ask for.”

Russell, who was brilliant a year ago when the Mustangs held off Warroad for the state title, made 12 of his saves in the final period against Hermantown. That total doesn’t include Kevin Danielson’s shot of the goalpost or another oh-so-close attempt by Cody Christopherson.

“I thought, we played one of the best games we’ve played all year, shutting them down a lot and getting a lot of chances,” Plante said about his No. 3-seeded Hawks (27-4-0), who grabbed a 1-0 lead after the opening period on a goal by Chad Bannor. “Apparently the hockey gods weren’t in our favor today.”

Riley Borer tied it for top-seeded, top-ranked Breck (28-2-0) in the second period, setting up the tense finish and Morin's luck-of-the-bounce goal.

“I was standing right there, and I felt it hit my shin pad, so I was watching it,” Morin said about the goal that was reviewed, a mere formality given that no one from either team thought Morin intentionally direced the puck in the net. “When I saw it hit the back of the net I was like, ‘Wow, what more can you ask for’ ”?

1. Michael Morin, Breck
Senior forward scored with 1:40 left to secure the Mustangs’ second straight state Class A title, the puck glancing of him as he tried to work around two Hermantown defenders on a high-speed rush to the net.

2. John Russell, Breck
Senior goaltender withstood a barrage of Hermantown shots in the third period, 12 of them in all that forced Russell to flash the game-stealing ability he used a year ago in similar fashion in the Mustangs’ state championship victory over Warroad.

3. Adam Krause, Hermantown
Senior finished his high school career with his typical mix of muscle and finesse, as he battled Breck’s top forwards, most notably Tyson Fulton, to a standstill until the very end. Krause finished with a team-best seven shots.

Tough task
Breck coach Les Larson said the Mustangs’ second title came much harder than their first. Even before the season, the Mustangs were dealing with adversity in the form of Larson’s major heart surgery. During the recovery period, Larson stayed off the bench for scrimmages and the ice for practices. “It’s wasn’t about me. But it was much more difficult, I’ll tell you that. The difficulty is you really have a target on your back when you win it. It was a struggle.” It didn’t show. The Mustangs were the state’s highest scoring team, averaging 7.04 goals per game and suffered only one loss to state high school competition. In the state tournament, however, Breck was in the unfamiliar position of trailing 1-0 after opening periods against both Warroad and Hermantown.

Losing a lot
With 13 seniors on Hermantown’s state tournament roster and 12 on Breck’s, the Hawks and Mustangs were veteran clubs featuring some of the state’s highest scorers and biggest stars (Adam Krause for Hermantown; Mike Morin and Tyson Fulton for Breck), all of whom will graduate. While both programs are so strong that it wouldn’t be a surprise to see either team make a return trip to the state tournament next season, neither will likely be ranked in the state’s top 10 to start the year.