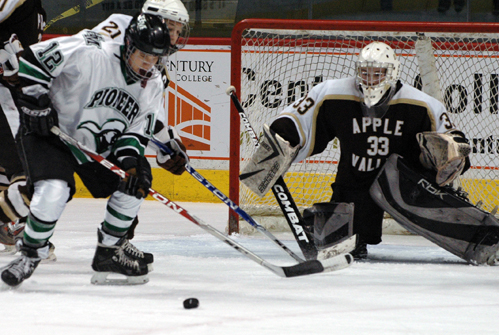 After losing in one of the longest games in state tournament history less than 24 hours earlier, Hill-Murray coach Bill Lechner knew his team needed a lift.

The Pioneers certainly found one.

Jack Walsh ripped in a goal just 26 seconds into the state Class AA third place game Saturday, March 13 at the Xcel Energy Center in St. Paul, leading the Pioneers (27-3-1) to a 6-3 victory over Apple Valley.

Walsh was one of five seniors placed in the starting lineup for the game along with Willie Faust, David Bruchu, Jordan Johnson and Chris Casto. In their final contest as Pioneers, they provided the spark.

“We just wanted to come out flying and that just really started to get the wheels turning,” Walsh said. “To come back from last night (a 2-1 four-overtime loss to Minnetonka), we didn’t really have our legs under us. But we came out and got it going.”

Loren French and Ryan Holler added goals late in the first period to give Hill-Murray a 3-1 lead.

Lechner gave his team as much rest as it could get the night before, forgoing its usual pre-game routine. He chuckled as he talked about how the Pioneers prepared for the game against the Eagles.

“Last night, we knew Minnetonka,” Lechner said. “We knew everything about them – where they shoot, where they go, what they do and how to step on them.

“Today, I knew nothing about Apple Valley except their top line. And I didn’t care. I just told the kids, ‘I’m opening the gate, you guys just play.’ That’s all. Old-time hockey.”

The momentum proved difficult to maintain, however, as weariness set in. When the Pioneers hit a lull midway through the game, Apple Valley took advantage. A.J. Michaelson and Kris Goodman scored just 1 minute, 59 seconds apart midway through the second period to tie the game at 3-all.

Lechner responded by expanding his bench, playing all his four lines and three sets of defense. Their fresh legs helped spur a three-goal, third-period outburst. Johnson, Loren French and Bruchu all tallied third-period goals as the Pioneers outshot Apple Valley 14-4 over the final 17 minutes.

“I told the kids there was nothing to save it for, just live on the adrenaline,” Lechner said. 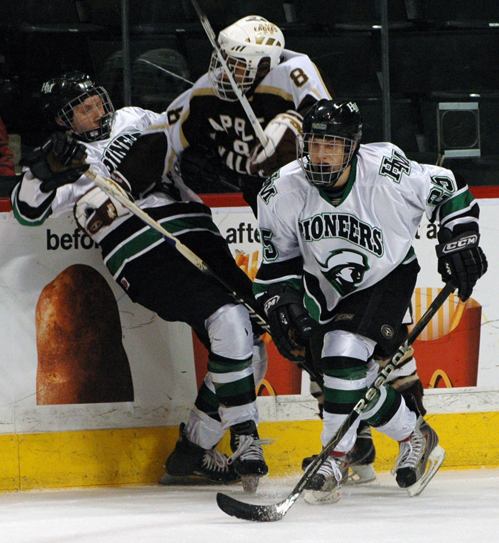 1. Jordan Johnson, Hill-Murray
Johnson was a key both offensively and defensively for the Pioneers, scoring a goal and an assist and finishing with a plus-3 rating.  All tournament long, Hill-Murray's defense was strong from top to bottom.  His goal 2 minutes, 24 seconds into the third was the game-winner.

2. Loren French, Hill-Murray
French netted two bookend goals, one in the first period and one in the third, while finishing plus-2 on the night.

3. Jack Walsh, Hill-Murray
Walsh got the Pioneers off on the right track, scoring just 26 seconds into the game.  He also added an assist on Ryan Holler's goal late in the first that pushed the lead to 3-1.